Donald Lutz has one of the most intriguing back-stories in the system. He's one of very few European prospects to sign on with an MLB organization. He's a player with natural ability who picked up the sport later in life. He's a physically large player, but one who also has solid athleticism. Overall, he's an intriguing bundle.

However, Lutz has some legitimate talent to go along with the compelling narrative. He doesn't have a diversified set of tools, but if developed properly, and used correctly, he could emerge as a valuable offensive contributor for the organization.

Lutz is gaining a lot of notoriety for being a "German developed" player, but he was actually born in Watertown, NY. He was, however, raised in Germany and as a result didn't play baseball until he was almost sixteen years old. Hockey was his preferred sport and like a lot athletes with hockey backgrounds he swings from the left side despite being naturally righthanded.

Lutz picked up baseball as a teenager and was ultimately signed out of Major League Baseball's Europe Academy. The Academy brings together the best European and African talent to work out for several weeks with top Major League coaches and instructors. The MLB European Academy is a centerpiece of MLB's player development efforts in Europe, which includes 25 off-season player academies in 9 nations. Since its inception in 2005, over 50 players from the MLB Academy have signed contracts with Major League clubs.

The Reds, through global scouting director Jim Stoeckel, signed him out of the Academy in 2007. There are two ways to look at Lutz getting a late start in the game of baseball. The obvious one is that he lacks the experience that other prospects bring to the table. On the other hand, it also reveals an aptitude for the game, as he's come a very long way in a limited amount of time.

Lutz split time between three different levels during the 2012 season. From lowest to highest, he spent time at Rookie ball, high-A, and double-A.

Outside of a rough stretch in double-A, the power, which is his calling card, was on full display during the season.

Lutz will go as far as his bat will take him. He's an offense-first prospect, as, at their peak, his defensive skills and position will create only minimal value. In some ways, he reminds me of Juan Francisco. Good power potential, but limited defensive value and no speed. At similar points in their development, Lutz has more on-base skill, but a lesser hit tool than Francisco.

In his pre-pitch stance, Lutz stands with an open, slightly wider than shoulder-width stance. As the pitch comes to the plate, Lutz closes up his stance. His stride starts by moving in towards the plate, where his foot lands flat before rising up onto the ball of the foot. He rises up onto the ball of his foot to trigger his weight transfer, dropping the foot back down to the ground as his weight moves forward. So, it's really a two-piece stride, operating first to close up the body and second raising and lowering the heel to trigger the weight transfer from back foot to front foot.

Lutz's two-piece stride is similar to that of Jeff Gelalich, as both utilize an initial movement before rising up on the ball of the front foot. In so doing, they rise up, standing somewhat taller, and rotate the front hip slightly inward to cock the hips.

While this lower body movement is happening, Lutz is using a very unusual arm action to load his hands for the swing. Pre-pitch he holds his hands up by his left ear with a high back elbow. In order to load his hands, Lutz basically drops his hands down and back before bringing them back up to a position similar to the starting point. In essence, he moves his hands in a sizable circle in order to load up for the swing. While he's moving his hands in a circle, he's also twirling the bat head in a big circle. So, there's a lot of circular movement involved in loading his hands.

For me, the defining characteristic of Lutz's swing is the whip-like action. He generates good bat speed and really throws the head of the bat at the ball. He uses his hands very effectively in his swing, even his circular style load is very loose and fluid. In general, his swing has a more "handsy" feel to it, though he still incorporates sufficient lower body rotation into the swing.

Lutz seems to more effectively utilize "bat lag" than the typical hitter. "Bat lag" is a positive component of the swing and refers to the barrel of the bat lagging behind the hands in the swing. The longer the hitter can maintain that lag, the more power will be generated by the swing. When the bat emerges from the lag position, the barrel comes around and into the point of contact. 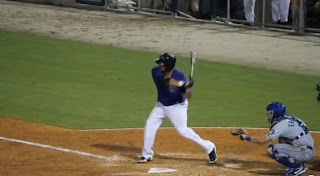 Lutz maintains a slightly smaller "lag angle" (the angle between the right forearm and the bat) than the 90 degree angle maintained by the average hitter. Lutz's smaller "lag angle" gives his swing a slightly steeper angle of attack, caused in part by a more straight line (rather than rounded) hand arc path. His hands move down towards the ground in a straight-line-like direction before somewhat abruptly moving forward in a straight-line-like direction to meet the pitch. This less rounded hand arc path, and smaller lag angle it creates, helps him generate good power by delaying the release of the barrel in the swing.

Given Lutz's combination of solid lower body rotation and strong hand action, it's not difficult to see why he's able to generate such good bat speed and power with his swing. He really whips the bat through the zone, so the question with Lutz is whether his hit-tool will be good enough to allow him to reach his plus-power. He needs to be able to make consistent contact or else the power will never come into play. Power without contact is no power at all.


Here's a look at Lutz at the plate, courtesy of RedsMinorLeagues on YouTube:


Overall, there are things I like about Lutz's swing mechanics, which are fundamentally sound. In fact, despite his lack of experience, I'm oddly optimistic about his hitting going forward.

Lutz has the type of power that could make him an impact hitter, but significant questions remain about whether his hit tool will allow that power to be playable at the MLB level. The whip-like action in his swing is impressive, but also raises questions about whether he has the type of hand-eye coordination and bat control necessary to consistently put the barrel on the ball against advanced pitching.

Lutz will always reside at the bottom of the defensive spectrum. Over the course of his professional career, he has spent 185 games at first base, 83 games in leftfield, and 20 in rightfield. There are 225 million reasons why first base isn't a legitimate option for Lutz and rightfield is a pipe dream, so leftfield represents his best bet for playing time with the Reds.

Due to the fact that he picked up the sport later in life, he simply hasn't had enough repetitions to become a polished defensive player. He has decent athleticism and speed for his size, but his lack of experience really works against him.

Lutz simply needs to get more experience on defense. The consistent repetitions in the field will help him with his defensive actions and his reactions. He has decent instincts, but needs to improve his initial read off the bat. He'll never be a plus defender, but he likely can become adequate at the bottom of the defensive spectrum.

Lutz is the unfortunate combination of raw and older. Picking up the game later in life both lengthens his development path and shortens the time he has to complete it. That works against him to a certain extent. As it stands, he's made good strides, but he simply needs more experience to polish up all aspects of his game.

His bat remains his ticket to the majors. The power potential is legitimate. Going forward, he needs to demonstrate enough hit-tool to reach his power production and enough on-base ability to increase the value of his offensive production. An offense-first player provides little value other than what his bat provides, which means there very little margin for error in his development. Consequently, Lutz needs to demonstrate more than just power to be a contributor at the MLB level. For now, despite his likely negligible defensive value, Lutz brings enough offensive upside to the table to land at #18 on the list.
Posted by Lark11 at 1:39 AM