As it stands, the Reds have a nice top tier of talent, but lack depth in the system. To rebuild the depth, they'll need some of their lower tier players to take a step forward. Now that he's healthy, pitcher Drew Cisco is one such player who could make that jump.

The Reds selected Cisco with the 187th overall pick in the 6th round of the 2010 draft out of Wando High School in South Carolina.

During his high school career, Cisco was always the staff ace and earned All-Lowcountry honors four times. As a senior, Cisco tossed 77 innings and posted a 10-2 W/L record, a 0.91 ERA, a 100/13 K/BB ratio, and 56 hits allowed in 77 innings pitched. Cisco also performed admirably at the World Wood Bat Association Championship.

His high school coach, Jeff Blankenship, had the following to say about Cisco:

"He's one of the most focused players we've coached, on the mound and at the plate," Blankenship said. "He bats third in our lineup, which is a very important spot in the order. He's walked 12 times in 44 plate appearances. That's a sign of his patience, his poise. It's something he was born with. When he's out there on the mound, there are no distractions. He's that focused. Sometimes, when he walks off the field, you want to shake him to get him out of that mode so you can talk about the finer points of pitching."


It's not surprising that Cisco has polish and poise beyond his years, as it's in his blood. Whether it's nature or nurture, there is no doubting the positive impact on Drew of his baseball playing family. Drew's grandfather, Galen Cisco, played in the majors for parts of 7-seasons and served as an MLB pitching coach, his father, Jeff, played minor league baseball, and his brother, Mike, is now pitching in the Phillies organization.

By the time the draft rolled around, Cisco was rated as the 74th best prospect by Baseball America. He had a commitment to the University of Georgia, but the Reds bought him out of it with a substantially over-slot bonus of $975,000. Obviously, it took a decent chunk of money to get it done, but Cisco was a very good value in round 6.

Unfortunately, before Cisco could throw a professional pitch in anger, he underwent Tommy John surgery keeping him out all of the 2011 season. He returned to the mound in 2012 in the late-season Pioneer League.

For the Billings Mustangs, Cisco logged 15 starts, posting a 3.39 ERA, 1.15 WHIP, 1.30 GB/FB ratio, and a 45/7 K/BB ratio over 58.1 innings. His walk rate of 1.1 BB/9 and strikeout rate of 6.9 KK/9 supports his pitching profile, which is command/pitchability rather than power/stuff. Performance level aside, it was most important that he got through the season healthy, which he managed to do.

Cisco uses very solid, functional mechanics, which match his pitching profile. He's a control pitcher who stays in control of his mechanics throughout the delivery. I do wonder, however, if he would benefit by trying to wring a bit more force out of his mechanics to increase the velocity generated. Or, would any improvement in performance level from increased velocity be outweighed by a decline in command/pitchability? In the future, that's a question that may need to be answered, as his pitching profile may not be one that lends itself to success against more advanced hitters.

Pre-pitch, Cicso stands with his feet shoulder-width apart and his glove just below his chin. His rocker step is a small step towards first base, unweighting his right foot to enable him to shift it down onto the rubber. He then brings his left leg up into a leg kick, which exceeds parallel with the ground and includes some body coil.

At the apex of his delivery, Cisco maintains good balance and body control, allowing him to easily transition into his drive to the plate. Up to apex, Cisco does a solid job generating force, after apex he does a solid job imparting that force to the baseball. He could do a better job in the generation of force and he could do a better job in efficiently transferring that force to the baseball, but both of these aspects of his delivery are certainly solid even if they put a tick more stress on the arm than is ideal. 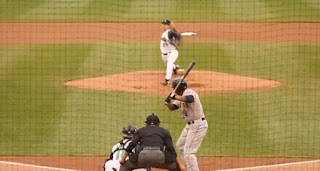 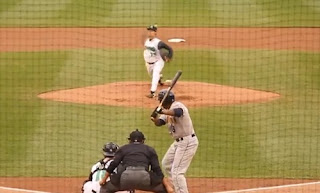 As for the stride itself, it's of acceptable length and he doesn't land on the heel, which would increase instability. In addition, his throwing arm is in solid, if ever so slightly late, position when the stride foot touches. 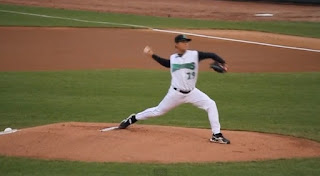 In addition, in the above photo you can see Cisco's front shoulder opening up early, almost in time with the opening of the lead hip. If you aren't going to generate velocity by summing the force generated by the kinetic chain, then you need to generate it with the pitching arm. Cisco leans more heavily on the latter, than the former in generating his velocity. And, what he generates isn't plus, causing him to adopt a command/control pitcher profile.

While the obvious benefit of plus velocity is the ability to limit contact, an ancillary benefit is a significantly larger margin for error. If you throw 97 mph, then you can get away with far more location mistakes than if you throw 90 mph. You can still be successful at a lower level of velocity, but your control needs to be impeccable and you need to ensure that your mistakes drift off the plate instead of over it. 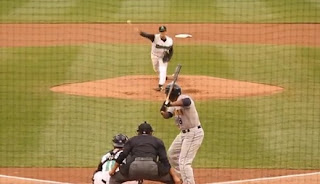 Finally, in the above photo, you can see that Cisco uses a high three-quarters arm slot. When coupled with his shorter stature (5-11), a lower arm slot makes it more difficult to get downward plane on the fastball. If you lack downward plane on the fastball, then it becomes easier to hit because it's flatter as it passes through the strike-zone. As a result, you need to offset the flatter fastball with plus velocity, plus command, and/or plus movement. Obviously, Cisco doesn't bring plus velocity to the table, so he'll likely need to rely on location and movement in order to have an effective fastball against advanced hitters.


Here's a look at Cisco working for the Dayton Dragons, courtesy of RedsMinorLeagues on YouTube:

Overall, Cisco has solid, though far less than ideal, mechanics, which he repeats very well in part due to good balance and good tempo.  His ability to repeat his mechanics helps him generate plus command. However, in part, his balance is good because he's only controlling minimal forces in the delivery, as he simply doesn't generate significant force with his body. That could lead to a lower performance level and a higher injury risk to his pitching arm. Given that his fastball is already at the lower end of the acceptability spectrum, anything that acts as a drag on performance level could prove to be significant.

Cisco primarily features a four-pitch mix. He uses a four-seam fastball that sits in the 88-92 range, a two-seam fastball that sits 87-89 mph with good movement, a big curveball that clocks in between 76-78, and a change-up with sink. His pitches mostly grade out as average, though the curveball may already be above average. His curveball isn't a true 12-to-6 type due largely to his three-quarter arm slot, but he does spin it well and it has good bite. The change-up has a bit of arm-side run to it and good potential. His impressive command and polish also makes him comfortable throwing all his pitches in just about any situation.

Cisco's fastball velocity isn't plus, but he effectively commands both the two- and four-seamer to both sides of the plate. As for the two-seamer, he can cut it or sink it, which helps offset the lower velocity level and induces ground balls. Additionally, the fact that Major League Baseball is moving away from the age of steroid infused gorilla ball should only help those whose game is not defined by power. Given Cisco's build, there isn't significant physical projection left to his game, but his velocity might improve a tick as he continues to mature physically and settles into the throwing regimen of professional baseball.

Cisco was a popular selection when he was first drafted, as his tremendous polish and command intrigued people despite his average arsenal. However, Tommy John surgery largely knocked him off the prospect radar, but he's now healthy and ready to get his career back on track.

Cisco's repertoire limits his ceiling, but his command, polish, and pitchability still make him an intriguing prospect. If he can manage his injury risk and find a way to offset the lack of downward plane on his fastball, then he may prove to be an effective and valuable starting pitcher as he climbs the ladder. If he can't find an effective fastball, he may be able to find success in a long relief role where he can pitch backward and generally lean more heavily on offspeed pitches.