I've heard complaints recently about Cincinnati Reds fans and their propensity for showing up in large numbers for select giveaways. The giveaway item that is most often cited is the (in)famous Bobblehead. Accordingly, I thought I'd check to see if the Reds did get substantially more fans on Bobblehead nights.

In 2007, the Reds had four separate Bobblehead nights. These four giveaways were spaced out over the season, with one each falling in May, June, July, and August respectively. The Bobbleheads were of Bronson Arroyo, Aaron Harang, Frank Robinson, and father and son broadcasters Marty & Thom Brennaman.

Here's a breakdown of the attendance for those games: 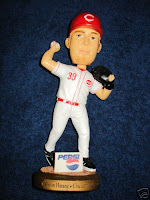 For what it's worth, the Brennamans clearly fared the worst of the four promotional giveaways, as the other three giveaways were close to, or exceeding, 30,000 fans. On average, the Reds had a paid attendance of 28,882 on Bobblehead nights.

But, how does the Bobblehead average stack up against the Reds average attendance in 2007?

All in all, Reds fans do like their Bobbleheads. Unfortunately, many will point to this as evidence of a fickle, unsophisticated fan base, but whatever the reason, at least they attended. Die-hard fan or not, their revenue spends the same for the Reds.