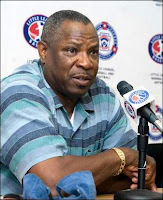 Reports indicate that the Reds are interested in Dusty Baker, who would be about the last person the Reds should hire. Dusty has a long history of favoring veteran players (Neifi Perez, Mark Gardner, etc) over younger ones. Even more disturbingly, he has a power track record in handling young pitchers. Given that the Reds are finally on the verge of developing impact starting pitching to end a decades long drought, handing the careers of those young pitchers over to Dusty Baker would be a disaster.

Baker was handed one of the top pitching prospects to come out of the amateur ranks in quite a long time. After his first full season under Baker's direction, Prior has never been the same. You can debate how much of the fault lies with Baker, but given the research of Will Carroll based on the work of Dr. Mike Marshall, Dr. James Andrews, and Dr. Frank Jobe indicates a dangerous correlation between heavy workload at a young age and shoulder/elbow injuries. The injury risk for pitchers aged 23 or younger is much higher than for other pitchers, which is why most wise organizations limit the workloads and pitch counts of their young pitchers.

In 2003, Mark Prior was 22 years old and enter his first full season at the MLB level. He was coming out of USC as one of the most heralded pitching prospects of recent memory. He had a fantastic season in 2003, one for the ages, but he's never been the same since. Here's a look at Prior's workload and Dusty's handling of him during that season. 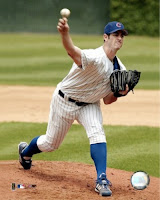 More fun facts, look what Dusty did to him in September, when the Cubs needed to make a push for the postseason.

By my count, that's 6 starts and 757 pitches in September at the end of a long season. Not to mention, back to back starts of 130+ pitches in the final 2 weeks of the season. After a long year and a lot of innings, Dusty had Prior throw two of his highest pitch count games.

Now, on to the postseason, where Prior put up the following pitch counts:


COMPARED TO A WORKHORSE

Just to help put Prior's workload in his age 22 season into the appropriate context, let's compare his workload to that of legendary workhorse Aaron Harang.

Over the past three seasons, Harang has thrown the following number of pitches:


So, at the ripe old age of 22, Mark Prior threw more pitches in a single season (combined regular season and postseason) than Aaron Harang ever has. And, he did it in fewer starts, which means that he threw far more pitches per start. Modern researches also indicates that an arm is much more susceptible to injury when fatigued, so throwing more pitches means that the risk of arm injury is even higher. Evidently, Prior should be thankful that he missed a few starts over a stretch in July/August, or else his arm might have just flown right off.

In short, what happened to Mark Prior in 2003 is something that should never happen in the modern game. Modern medicine has removed some of the fog over pitching injuries and revealed that one of the quickest ways to ruin a young pitcher is to overwork him. It cannot be definitively said that Baker caused Prior to get injured, but given what we know about young pitchers and heavy workloads, he certainly put Prior at a substantially higher risk of injury.


IMPLICATIONS FOR THE REDS 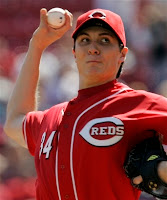 Given the pivotal role that Homer Bailey and Johnny Cueto will be required to play in the future for the Reds, Dusty Baker is absolutely the wrong choice as manager. The Reds have taken a lot of steps to improve their player development department to ensure the health of their young prospects, but hiring Dusty Baker would be a gigantic step backwards.