Well, the Reds made it official with the announcement of a three year contract for Dusty Baker and Cincinnati toothpick merchants couldn't be happier. Baker would not be my first choice or even my 99th choice, but the "i"s have been dotted and the "t"s have been crossed, so it's a done deal. Accordingly, there's nothing left to do but take an objective look at the Pros and Cons of one Johnnie B. Baker Jr., also known as Dusty.

1) The Great Communicator is Always Respected by his Players

Dusty is the ultimate players' manager and he is typically very popular in the clubhouse. Baker is a manager who was able to handle Barry Bonds and his antics for several years, granted Baker seemingly let Bonds just play by his own rules.

In addition, Baker always seems to have strong relationships with his players, which creates effective communication. Over the years, the Reds have suffered from a lack of communication in the clubhouse, as there was seemingly a constant rift between the players and management.

Baker will ensure that their is no communication problem in the clubhouse and is unlikely to ruffle anyone's feathers. In addition, this kind of environment may lead to a more cohesive unit on a team in which the whole has always been LESS than the sum of the individual parts. 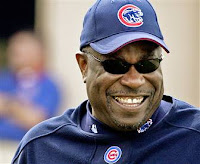 So, if you believe that a winning track record as a manager is indicative of future performance, then this a definite positive.

Dusty brings instant credibility to the organization, as he is a "name" manager who is well known in baseball circles across the nation. This move increases the media recognition of the Reds and brightens the spotlight on baseball's oldest franchise. Having Dusty at the helm will make the nation and the media sit up and take notice of the Reds more than the previous lesser lights at the helm of the Reds. 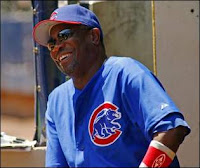 In addition, this move ends the non-stop turnover at the manager position, as Dusty is very likely to serve out his entire 3 year contract in Cincy. His track record will give him the benefit of the doubt and then some in Cincinnati. The odds of him being fired before the end of his 3 year contract are very slim. The Reds have needed stability in the front office and on the field, so retaining Krivsky and bringing in Dusty will achieve that goal.

This is biggest concern about Baker for Reds fans and one I touched on earlier. Dusty Baker

does not believe in pitch counts and has consistently exhibited a tendency to overwork young pitchers. He did it with Mark Prior, Kerry Wood, and Carlos Zambrano in Chicago and he did it with Joe Nathan in San Francisco.

This is a big cause for concern for Reds fans as the organization is FINALLY on the verge of developing some quality young pitching. It has been several decades of frustration for the organization and fans, as top pitching prospects have been felled by injuries and ineptitude, leaving Tom Browning as the last quality starting pitcher developed by the Reds.

Homer Bailey and Johnny Cueto are looking like top of the rotation starters in the near future, so handing their futures over to Dusty Baker seems like a risky proposition, to say the least. Reds fans should be VERY concerned about Baker and his tendency to overwork his young starters.

Throughout his managerial career, Dusty has played favorites. He has always had an affinity for certain veteran players, which would be fine if those players were more productive. However, the players he favors are often those who aren't overly valuable or productive. Over his managerial career, Dusty has loved infielder Ramon Martinez, Neifi Perez, and Darren Lewis.

This tendency wouldn't be a problem if Dusty picked more productive veterans to favor, but his favorites often seem to be players who are bested suited to limited duty. Unfortunately, being a "Dusty favorite" always results in a player receiveing more playing time than is deserved.

Regrettably, his preference for veterans may result in an inequitable distribution of the playing time in Cincinnati.

Throughout his career, Dusty has proven himself to be rather thin skinned. In San Francisco, which is a very laid back media environment, Baker constantly blanched at perceived criticisms. The environment in San Francisco pales in comparison to the pressures of the East Coast, where criticism, where justified or not, is quite simply the name of the game.

In Chicago, Baker took exception to criticism from broadcaster Steve Stone, which ultimately led to the "resignation"/departure of Stone. Once again, Baker handled criticism poorly and it negatively impacted the organization.

The media scrutiny in the Midwest isn't as harsh as in New York, but it would seem to be harsher than on the West Coast. Accordingly, it's not unreasonable to expect friction between Baker and the media during his time in Cincy.

In fact, a confrontation between Dusty and the Brennaman boys seems like a forgone conclusion, as the Brennamans specialize in criticizing the hometown squad in their never ending "quest for objectivity."

The 2008 season will be a pivotal one for the Reds, as the Reds will begin working impact homegrown pitching prospects (Homer Bailey & Johnny Cueto) into the rotation and begin to rely heavily on top offensive prospects (Jay Bruce & Joey Votto). These two factors, to a large extent, will determine the success of the Reds over the next 5 years. Unfortunately, Dusty Baker is the exact wrong choose to reach those two goals.

Baker's preference for veterans may result in him favoring Scott Hatteberg (if he's back) over Joey Votto or Ryan Freel over Edwin Encarnacion or Jay Bruce. To be successful, the Reds need to be relying MORE heavily on young talent, not LESS. This is just one reason that Dusty is coming along at just the wrong time for this organization.

In addition, Dusty's long exhibited tendency to overwork young pitching prospect is a disastrous tendency for the Reds in 2008. The Reds finally have some impact pitchers coming out of their farm system, but now they seemed destined to be ruined at the MLB level. The success of the organization over the next decade rests largely on the right arms of Homer Bailey and Johnny Cueto, so any move that increases their risk of injury is a poorly conceived idea. On the bright side, maybe the Reds can act fast and get the volume discount on Tommy John/Shoulder Surgeries.

All in all, unless Dusty can reign in his two negative tendencies, it's difficult to see how this hire makes sense. I'd feel much better about this hire if the Reds were able to follow it up with a hire of Leo Mazzone to handle the pitching staff. The Pope of Pitching would offset Dusty's harmful tendencies, but the Reds are probably last on his list of destinations.

To be successful, Dusty needs to learn to limit the workloads on young arms and rely on young talent over less talented veterans. While his managerial track record doesn't show any evidence of it, Reds fans better hope that an old dog can learn new tricks.
Posted by Lark11 at 11:16 AM