Kevin Correia went to California Polytechnic State University in San Luis Obispo before the Giants selected him with the 127th overall pick in the 4th round of the 2002 entry draft. Correia became the first player from that draft class to reach the majors when he made his debut in July of 2003.

Correia features a low 90s fastball, a good circle change, and an average slider. However, what sets Correia apart is the movement he gets on his pitches, which can make his pitches truly electric. Former Giant Mike Matheny, highly regarded for his defensive prowess, once said that his hand would get bruised from catching Kevin Correia. Correia's pitches had so much movement on them that Matheny was not able to center the pitch in his catcher's mitt. If a catcher the caliber of Matheny has difficulty catching the pitch, how difficult must it be to hit? 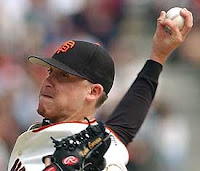 In part because of his control problems and in part because the Giants are an oddly run organization, Correia has been bounced around more than is healthy during his professional career. He has spent time in the minors every season from 2002-2005, has been called up and sent down multiple times during those seasons, and has been gone from the rotation to bullpen and back again several times over. At this point, the Giants would be wise to put him in the rotation and leave him there.

In each of the past two years, Correia has pushed his K/BB ratio up to or over 2.00. He spent all of 2006 in the bullpen and spent the first half of 2007 working in relief as well, but he was put back in the rotation in the second half due to the trade of Matt Morris and the team's decision to shutdown Tim Lincecum.

Once in the rotation, Correia made 8 starts in which he posted a

Overall, it seems clear that Correia has improved his control and command, which is the big key to unlocking his potential. If that's the case, then he could be a true sleeper for 2008.

While I desperately want the Reds to acquire Kevin Correia, it appears that he'll remain with the Gigantes. Hopefully, he'll be given the 5th starter slot, behind Matt Cain, Tim Lincecum, Barry Zito, and Noah Lowry. If his improved command is for real, then there's no reason why Correia can't have a breakout 2008 season. I actually think he's a better bet for both 2008 and the future than the recently acquired Edinson Volquez, but only time will tell.
Posted by Lark11 at 5:00 PM