Carlos Fisher is a prospect who rarely gets much publicity, but he has quietly been very effective in the professional ranks. He would be ranked much more highly if the Reds farm system wasn't in such good shape, but quality drafting and revitalized international scouting are really beginning to pay dividends for the organization.

The Reds drafted Fisher out of Lewis & Clark with the 332 overall pick in the 11th round of the 2005 draft. Lewis & Clark isn't generally recognized as a top baseball school, but it is rapidly becoming one of the best programs in the nation, despite its Division II status.

Fisher started out as an outfielder at the collegiate level, but struggled at the plate, so he was turned into a pitcher. He's got all the tools to be an effective pitcher, but at 24 is still a bit behind the development curve due to his lack of experience on the mound.

Fisher features a 91-93 mph two seam fastball with heavy sink, a cut fastball, a hard slider, and a changeup. However, his best pitch is his sinking fastball, as it generates a lot of groundballs, which is his biggest asset.

Between two minor league levels in 2007, he had a combined 1.72 GB/FB ratio. The Reds have long been in need of ground ball pitchers and Fisher fits that profile well. In addition, Fisher is a fierce competitor, which aids him in his transition from position player to pitcher. Unfortunately, a player's character/makeup often seems to be overlooked or at least undervalued, as scouts grade his tools and analyze his statistics, but it can make the difference between a good career and no career at all. 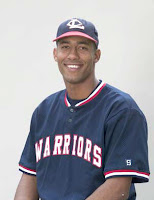 Despite his limited time as a pitcher, Fisher has had good success at each stop in the minors. He doesn't have a lot of projection in him, but he could still improve as he fills out and gains more experience.

In 2005, after he signed, the Reds started him out in Billings at the Rookie League level, where Fisher posted a 4.19 ERA, 1.40 WHIP, and a 45/19 K/BB ratio in 53.2 innings. His ERA and WHIP weren't overly impressive, but his K/BB ratio was a good indicator of future success. 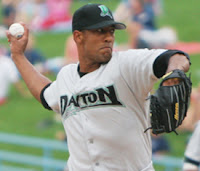 On the year, he made 27 starts and allowed 2 or fewer runs in 19 of those starts. All in all, Fisher had a stellar season, which solidified his prospect status and made him one to watch.

In 2007, Fisher was promoted to high-A Sarasota, which again proved to be no challenge. In 41.0 innings, Fisher posted a 2.20 ERA, 1.00 WHIP, a 41/7 K/BB ratio, and a 2.15 GB/FB ratio. That level of dominance earned him a quick promotion to double-A ball, which is typically the most challenging jump in the minors.

At Chattanooga, Fisher finally found a level of competition that managed to slow him down, however he still managed to hold his own. In 113.1 innings, Fisher posted a 4.29 ERA, 1.49 WHIP, a 1.59 GB/FB ratio, and a 94/42 K/BB ratio. Not the same level of dominance, but a respectable showing.

Overall, his numbers weren't eye popping at double A, but there is still much to like. He maintained strong groundball tendencies and posted solid walk and strikeout rates. If he returns to double A to start 2008, which seems likely, then he will likely improve on these numbers. If he can do that, then he's a serious prospect and not merely depth for the system.

Fisher has a strong, athletic build which he uses to his advantage. He's 6'4" and 220 lbs. In addition, he utilizes an over the top arm slot, which allows him to maximize his ability to throw on a downward plane. His height and high arm slot really allows him to throw the ball downhill.

Fisher has fairly clean mechanics, which should help him reduce his injury risk. He has good tempo and balance throughout and utilizes clean arm action.

Like most pitchers in the modern game, he takes a small step to start 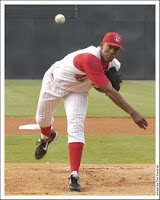 his motion and brings his hands only to his chest, not over his head as used to be the norm. The only unusual aspect to Fisher's mechanics involves his stride.

He uses a strong, high leg kick and maintains his balance over his "Pitching Arm Side (PAS)" leg. Fisher brings his "Glove Side (GS)" leg up slightly past parallel with the ground at its apex, but when he brings his leg down to begin his stride towards home plate, Fisher actually has a slight hesitation in his motion. As his GS leg descends from the leg kick, his GS foot actually twitches back towards his PAS shin, which creates a slight hesitation before his body drives toward the plate.

The hesitation works as a timing mechanism, though it's not one that he seems to need. His pitching arm doesn't lag behind his body, so he doesn't need to slow his motion down to allow his arm to catch up. Whatever the reason for it, the hesitation is part of his motion that he uses to gather his momentum and increase his load before he drives to the plate. At the very least, the hesitation indicates good body control throughout the motion, which is important.

The hesitation actually has a bit of the same feel, though much less extreme, of the Japanese pitching windup, which often involves a slight pause. Ultimately, it may work to his advantage, as it may help upset the time of the hitter the first few times he faces them. And, as the great Warren Spahn said, "hitting is timing. Pitching is upsetting that timing."

Another positive for Fisher is that he has a long stride, which when coupled with his height, means that he releases the ball closer to the plate than most pitchers. The closer the release point to the plate, the less distance the ball has to travel and less time it takes to get to the plate, which helps his fastball velocity play up a tick.

You can access the MLB draft scouting video for Fisher here.

The 2008 season will reveal a lot about Fisher, who will turn 25 in February. Fisher strikes me as future reliever, where his control and groundball tendencies would be of value. However, it's still to early to count Fisher out as a starter. If he can build on his level of performance at double-A in 2008, then he could have a career as a back of the rotation starter.

Fisher's solid performance lands him at #21 on the list, but that speaks more to the quality and depth of the Reds farm system than his abilities. Fisher's lack of top notch stuff means that he's unlikely to ever be a dominant pitcher, but he could find a niche at the MLB level.
Posted by Lark11 at 8:28 PM