Brandon Waring is a prime example of the Reds improving farm system. He's another second tier prospect that adds substantial depth to the farm system. However, Waring ultimately may have the offensive skill-set to become much more than an afterthought, he just needs to keep developing his game.

Waring attended Wofford College, where he played shortstop, displayed tremendous power, and a solid overall offensive game. In 2007, Waring hit 27 homeruns, which earned ranked him 2nd in the country in Division I baseball, behind only Kyle Russell's 28 for University of Texas. In addition, Waring hit .401 with a .682 SLG% in 2007. For his college career, Waring hit .331 with 41 homeruns, a .682 SLG%, and a 143/70 K/BB ratio.

That was enough for the Reds to select him as a college junior with the 229th overall pick in 7th round of the 2007 amateur draft.

The Reds sent Waring to the Pioneer League, where he played third base and excelled offensively for the Billings Mustangs. In 267 At Bats, Waring posted a line of .311/.369/.614/.984 with 20 homeruns.

While his offensive performance was impressive, there a few issues that should temper expectations. Waring spent three years playing Division I baseball, so he should excel in the Pioneer 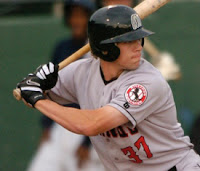 A college player shouldn't be so susceptible to the strikeout at the rookie league level of play, where the pitchers are still raw and unpolished. In addition, a late count hitter should have a better walk rate, which would make his strikeout rate much more acceptable. However, a high strikeout rate coupled with a low walk rate is definitely a big cause for concern.

It's hard to imagine that Waring's susceptibility to the strikeout won't be heavily exploited by more advanced competition. Waring joins Jay Bruce and Juan Francisco as having the most power in the system, but his strikeout rate is a definite reason for concern and he'll have to improve his contact rate if he's to be successful at higher levels.

Waring's value comes from his offense, so he'll go as far as his bat can take him.

Waring has a quiet stance without a lot of extra motion. He takes a wider than shoulder width 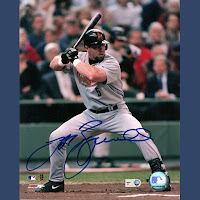 As for his swing, Waring has a clean, flowing swing. However, it's a swing that can get long, which makes him vulnerable to good pitching. Longer swings often result in larger holes in the swing, which can easily be exploited by more advanced competition. However, Waring has good hip rotation and a smooth, uncomplicated swing, which gives him good power. Waring's height means that he has longer arms, which means that pitchers may be able to tie him up inside.

While his strikeout rate is something that Waring may be able to improve upon, it also may simply be a consequence of his size. If that's the case, then Waring won't likely make much improvement, which is yet another reason for concern.

Taller players are often susceptible to strikeouts, as they have longer swings with more holes and bigger strikezones. Taller players have longer arms and longer bats, which can take longer to get into good hitting position in the zone. It's difficult to think of a tall player who had a consistently high contact rate and a good batting average through his MLB career. Tony Clark (6'7"), Adam Dunn (6'6"), Richie Sexson (6'8"), and Dave Kingman (6'6") type careers seem to be much more the norm for taller ballplayers.

You can access the MLB draft scouting video for Brandon Waring here.

Waring is a big man and it shows in his footwork. He lacks quickness and agility. With infield defense (especially at the hot corner), the battle is largely won or lost by the initial reaction. The first step either puts you in good position or a poor position from which recovery is unlikely. Accordingly, good instincts and reading the ball well off the bat are of the utmost import.

Waring has slow feet and lacks first step quickness, which is why the Reds immediately moved him to third base. In addition, he seems unsteady on ground balls, occasionally coming up too soon or letting the ball play him. Overall, Waring seems to lack confidence with the glove.

As for his arm, Waring utilizes an unconventional throwing motion, as he short-arms the ball like a catcher. In addition, he throws from a low three-quarter arm slot, which doesn't help his arm strength or accuracy, neither of which is very impressive.

Given the depth of the Reds system at the hot corner, Waring seems a poor bet to stay there. However, his arm would seem to preclude a move to the outfield, so first base seems to be his likely destination.

Waring is an interesting prospect, but he's got a long way to go. The 2008 season will reveal much about him, as he'll face much more advanced competition that's more capable of exploiting weaknesses. Ultimately, he seems destined to be a first baseman, but his bat is what will dictate his career path. However, his plate discipline, walk rate, and contact rate all need improvement and he seems likely to take a step backward in 2008, when he'll likely start out with the Dayton Dragons.

Whether he'll be able to improve on his walk or strikeout rates remains to be seen, but in years past he would've been ranked much higher, so his #19 ranking is a real testament to the improved talent and depth of the Reds' farm system.
Posted by Lark11 at 11:06 AM