After watching his performance at the hot corner on Sunday, any remaining shred of confidence I had in his defensive abilities has vanished. Granted, at this point, I didn't have much left, but he is clearly never going to be even a league average third baseman. 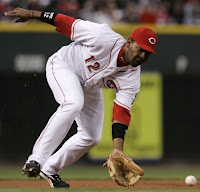 Against the Mets on Sunday, Edwin made an error that ultimately cost the Reds the game. Edwin threw the ball away in the 10th inning, which led to two unearned runs and a loss for the Reds.

Obviously, his poor defense really hurt the team in the 10th, but Edwin also made at least two poor plays earlier in the game that put the Reds behind the eight ball. Neither will show up in the box score, but both were detrimental to their efforts to win the game.

In the top of the 2nd, the Mets had Mike Pelfrey at second and Jose Reyes at first. Argenis Reyes grounded to Edwin at third, who made a poor to Phillips at second. Phillips managed to hold the bag for the force out, but any chance at a double play was lost. That brought David Wright up to the plate with two outs and a chance to drive in a run. Edinson ultimately got the out, but it was an opportunity that the Mets likely should not have had.

In the top of the 4th, Edinson struck out Mike Pelfrey to get things started. Jose Reyes then stepped up to the plate and lined the ball into the right-center field gap. Griffey wasn't quick to the ball, but got it in to Brandon Phillips who made a weak two-hop throw to Edwin at third. Despite the slowness of Griffey in getting to the ball and the weak throw by Phillips, the Reds still had a good chance to nail Reyes at third. Unfortunately, even though the throw was on time, Edwin didn't come up with it and Reyes was safe.

Reyes ultimately scored on a sacrifice fly from David Wright, so the poor defense cost the Reds a run. Unfortunately, on this play, there were three weak links in the chain, but Edwin isn't free from blame. If he caught the ball, then Reyes would have been out and the game never would have gone to extra innings.

The box score doesn't show all the damage that Edwin causes, but it's more than we might think.


BOILING IT DOWN TO THE STATS

At this point, the realization that Edwin is a huge liability with the glove should be dawning on everyone, and yet our front office just labeled him "untouchable." We have been patient in waiting on his development, but he is already 25 and showing no signs of improvement. 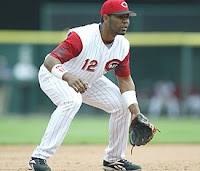 John Dewan developed a fielding metric called the Plus/Minus system, which he first unveiled in The Fielding Bible. It is the metric that I like best and it is defined as follows:

"Plus/Minus, which represents the number of plays the player made, above/below the number that the average fielder would make, according to the video scouts at Baseball Info Solutions. We rate corner infielders for their handling of bunts, and middle infielders for their work on the double play. We rate outfielders for how often they threw out baserunners (“Kills”) and how often they allowed them to take the extra base. “Rank” shows the player’s ranking in a particular category among qualifying players at his position (usually around 30). Pitchers and catchers are not included."

Including today's error, Edwin has 12 throwing errors on the season and 16 overall. Joe Crede has more errors overall (19), but no third baseman has more throwing errors.


TRANSLATING DEFENSE INTO IMPACT ON THE TEAM

It's difficult to understand the impact of a player's defense on a team's W/L performance. So, Dewan provides two rules of thumb for translating the plus/minus stat into runs and then wins/losses.

1) "To estimate runs prevented, use a number that is a little less than half of the plus/minus figure."
2) "The value of a win is at about 10 runs."

So, if Edwin is a -15 at third, then that means that he allows ~7 runs, which means that his defense costs the Reds 0.7 more losses than the average third baseman. That doesn't sound so bad, but if you factor in what an elite defensive third baseman would bring to the team, then it looks a bit worse. 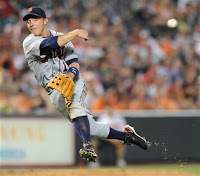 Using the same two rules of thumb, that is a 19 run difference and a 1.9 difference in wins.

Now, Edwin is a better hitter than Inge, but is he 1.9 wins better with the bat? Maybe so, but he gives back much of the gains from his offensive production with his shoddy glove work.

If we want to keep Edwin's offense, then we need to move him to a less damaging position, because we just can't succeed with his glove at third. That said, if we do move him down the defensive spectrum, then the value of his production is lower, so it may be wiser to just trade him away for a player who better fits our needs.
Posted by Lark11 at 6:23 PM