There was a very ugly incident during the Dayton Dragons game last night. A team wide brawl broke out against the Peoria Chiefs which resulted in a 1 hour and 9 minute delay and 17 ejections. Eventually, the game was resumed after some of the ejections were overturned. Reds GM Walt Jocketty, who was in attendance, and Terry Reynolds, director of player development for the Chiefs, contacted the league President to overturn some of the ejections. Jocketty and Reynolds did not want to risk having pitchers playing in the outfield, which would have been necessary due to the player shortage.

The brawl was incited by hit batsmen and a hard slide. Kyle Lotzkar got the start and hit a batter in the first inning. Zack Cozart got hit in the head in the bottom of first and had to leave the game. It escalated from there and resulted in the following, courtesy of gman8902:


And, here is how Marc Katz of the Dayton Daily News describes it:

"DAYTON — A first-inning four-run rally quickly escalated into a bench-clearing brawl between the Dayton Dragons and Peoria Chiefs tonight at Fifth Third Field that halted play for an hour and 9 minutes.

The game was resumed at 8:51 p.m. after the league office in Beloit, Wis., reversed 17 ejections that were handed down following the brawl, which lasted about 10 minutes.

Dayton shortstop Zack Cozart had to leave the game after being hit in the head with a pitch and Peoria second baseman Gian Guzman went out with a broken left leg.

Trouble may have started in the top of the first when Dayton pitcher Kyle Lotzkar hit the second batter, Nate Samson.

That half-inning ended without further incident, but when Cozart came to bat as Dayton's second batter — with a runner on first — he was drilled in the left side of the helmet by a Julio Castillo pitch.

Cozart fell to the ground immediately and eventually was helped to the dugout, finished for the evening.

Following an out, Brandon Waring then hit a slow roller toward second that Castillo tried to field. Guzman ran up behind him and fell over Castillo, breaking his leg. He had to be removed by stretcher.

That loaded the bases and Denis Phipps hit a pop fly half way down the right field line that bounced sideways into the stands for a ground rule double, scoring two runs. Catcher Devin Mesoraco then singled home two more runs. 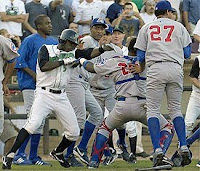 That prompted interim Peoria manager Carmelo Martinez to join the conversation, which quickly became heated, and when Martinez pushed Scott, the benches emptied.

Several fights broke out behind home plate, and Castillo threw a ball that sailed into the stands behind the Dragons' dugout, hitting a fan who had to be taken to a hospital.

Menchaca jumped on Castillo and eventually both managers and 15 players — including eight Dragons — were ejected from the game.

Those ejected from the Dragons were starting outfielders Justin Reed and Phipps, Kevin Feiner (who was taking the place of Cozart), starting catcher Devin Mesoraco and pitchers Henry Arias, Jeremy Horst, Jeff Jeffords and Luis Montano.

Within 45 minutes after the ejections were announced, they were reversed after the Class A Midwest League office heard what happened from the umpires.

The ejections were reversed because the teams did not want pitchers to play the outfield positions, which would have occurred had the ejections stuck.

Walt Jocketty, general manager for the Reds, the parent club of the Dragons, and Terry Reynolds, director of player development for the Chiefs, whose parent club is the Chicago Cubs, made that feeling known to league President George Spelius by phone.

Jocketty and Reynolds happened to be at the game."

I don't know what it is, but to me there has always been an inherent ugliness to fighting in baseball. Admittedly, I like hockey and the occasional hockey fight and also enjoy watching the sweet science, but something makes baseball brawls uglier and scarier than these other types of sporting violence. Maybe it's because hockey and boxing always involves willing combatants and take place under the watchful eyes of the referees, whereas that isn't the case in baseball. Or, maybe it's that fighting is to be expected in hockey and boxing and as a result there are strict rules and age old traditions that govern the action. In hockey, fighting is almost always about setting the tone or sticking up for a teammate. The goal isn't to hurt your opponent, but rather send a message. There is a team component and a purpose to fighting in hockey that is absent in baseball.

Baseball fights aren't governed by any established rules or traditions and they aren't driven by anything other than a base desire to inflict physical pain and injury on the opposition. Baseball fights are not part of a sporting event, but rather morph into something else entirely. Something too closely resembling blood lust. Whatever it morphs into typically turns my stomach.

Regardless of the reason, I have always found baseball fights to be pretty ugly and unsettling. Hopefully, everyone comes out of the "game" last night in good shape.
Posted by Lark11 at 8:31 AM