Getting a Feel for Jocketty and A Confirmation on Dusty 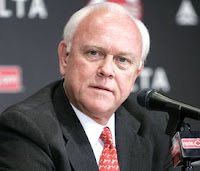 I'm still trying to get a feel for the predilections of Walt Jocketty. Admittedly, I didn't follow his every player personnel move with the Cardinals, but he seems to have made a number of solid moves, got lucky with Albert Pujols, and made one terrible trade for Mark Mulder.

Still, it's difficult to imagine what he was thinking when he hired Cam Bonifay and Bill Bavasi as special assistants to the General Manager. In fact, it's difficult to see it as anything other than a black mark against Jocketty, as Cam and Bill are two of the worst general managers in the history of Major League Baseball. In fact, Cam and Bill were listed #6 and #8 respectively on Jonah Keri's worst General Managers in the history of professional sports.

Cam Bonifay was the general manager of Pirates and made some of the biggest headscratcher moves imaginable. He gave hefty multi-year contracts to Kevin Young, Mike Benjamin, and one of the worst contracts in recent memory when he signed the mediocre Pat Meares. Not to mention, he topped it all off with a six year deal worth $60M for Jason Kendall. In addition, the Pirates constantly frittered away their top draft picks and never had a farm system of note.

As for Bavasi, he cut a swath of destruction up and down the west coast, first as the General Manager of the California/Anaheim Angels and then later with the Seattle Mariners. The list of mistakes is long and distinguished, including signing Mo Vaughn, Richie Sexson, Carlos Silva, and trading the entire farm system away for Erik Bedard.

Now, I can certainly understand that some people are quality baseball minds, but are just ill-suited for the role of general manager. In that category, I could see including Dan O'Brien, who suffered from paralysis by analysis as a GM, but seemed to have a knack for building a farm system. Unfortunately, I find it impossible to include Bonifay and Bavasi in that category, as neither seems to have the slightest clue about player valuation, building up a farm system, or any other aspect of front office work.

Jocketty may have a solid track record with the Cardinals, but he's not exactly building a 21st century version of the "best and the brightest" for his advisers. In fact, it's difficult to conceive what kind of advice of value either Bonifay or Bavasi could even offer. 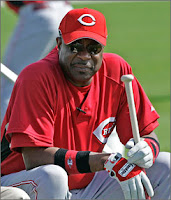 Now that we have shed no additional light on the mystery that is Walt Jocketty, it's time to turn our attention to one Johnnie B. Baker Jr. And, while we all know the reputation of Dusty Baker, is it actually true? How does Dusty manage the game? And, who better to measure the tendencies of MLB managers than Bill James?

The 2009 Bill James Handbook includes a section that tracks the tendencies of managers. Unfortunately, since it's a relatively new metric, there is no baseline for comparison. Even so, there are things to be revealed from the career of Dusty.

First and most obviously, Dusty works his starting pitchers harder than most. Dusty's managerial career is notable for his tendency to allow his pitchers to work "long outings" and using a "slow hook." Slow hooks are calculated by by adding the number of pitches plus 10 times the number of Runs Allowed. The top 25% of the scores in the league are considered Slow Hooks. Dusty led the league with 63 slow hooks.

"Long outings" are defined as an outing in which the starting pitcher throws more than 110 pitches. In 2008, Dusty had 39 long outings. In addition, Dusty has frequently led the league in Pitch Outs. In 2008, Dusty had good success utilizing the intentional base on balls. He called for four wide ones 40 times and of those 28 had a "good" result and 12 were "not good." Of the 12 "not good," 4 of those were a "bomb."

So, it's pretty clear that Dusty lived up to his reputation, as he likes to work his starters hard and gives them a lot of rope. However, I think it's just as interesting to see how Dusty handles the bullpen.

One of the more interesting new baseball statistics is the Leverage Index, which is the amount of swing in the possible change in win probability, compared to the average swing in all situations. The average swing value, by definition, is indexed to 1.00. If the score is 14-1, then the possible changes in win probability will be very close to negligible. Whether the pitcher gives up a home run or gets a double play ball, it doesn't really change the outcome of the game. However, in the late innings of a close game, the change in win probability among the various events will have rather wild swings. With a runner on first, two outs, down by one, and in the bottom of the ninth, the game can hinge on one swing of that bat. A home run and an out will both end the game, but with different outcomes for the teams involved.

In 2008, the leverage index was as follows for the Reds relievers:

So, in the crucial moments, Dusty relied heavily on Cordero and Weathers. However, it's difficult to argue that Jared Burton was not the most effective reliever on the team and yet he rarely pitched in high leverage situations. In addition, Jeremy Affeldt was very effective, but he was used mostly as a mop-up man.

Now, you can certainly make the "chicken-and-the-egg" argument on Affeldt. Was he effective solely because he was used in mop-up situations or would he have been equally as effective in the high leverage situations?

Whatever the explanation, it will be key to the Reds chances for success in 2009 for Jared Burton to work significantly more high leverage innings. Given their talent, the Reds don't have the margin of error necessary to be successful without using their best relievers in key situations.

It's too soon to be drawing any conclusions, but it seems clear that Dusty needs to handle the bullpen better in 2009.
Posted by Lark11 at 10:16 PM