2008 in Hindsight: The Affeldt and Fogg Signings

Well, continuing our theme of looking back at the painful 2008 season, it's time to look at a couple of pitching acquisitions, one of which worked out great and another that didn't. So, starting with the former and moving to the latter..... 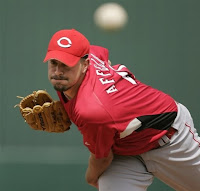 Prior to the season, I thought the Affeldt signing was a good one for the Reds due to both on the field and off the field reasons. Affeldt actually came through in both departments, as his on field production was good enough to earn him a Type B free agent classification.

As good as Affeldt was in 2008, the volatility of both the relief pitcher position and Affeldt himself makes him a mediocre bet for long term success. In addition, by re-signing him, the Reds would fail to maximize the value of their assets.

As I mentioned in my post when the Reds signed Affeldt, they need to "churn" players. By re-signing both Affeldt and David Weathers, the Reds would be holding onto their assets for far too long. In fact, they would likely be holding on so long that they would be running the value of their assets into the ground.

The true choice isn't between re-signing Affeldt and Weathers or letting them walk, but rather whether to exchange aging assets for younger ones or to ride the aging assets until their is no value left in the organization.

To me the choice is simple. For smaller market teams, players must be churned to keep the value of the assets in the organization.

Affeldt was a great signing because he could be signed for only one season and had hte potential to net a compensatory pick with a solid season. He had the solid season we needed, so now it's time to cash in on the gamble. 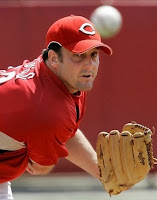 As for the Josh Fogg signing, I didn't think it made any sense and thought it could be detrimental to the young pitching prospects. At the time, I thought signing a veteran pitcher instead of going with the younger pitchers only made sense for three reasons, none of which were satisfied by the Josh Fogg signing.

1) The veteran lacks the upside of the prospect, but will provide better production in the short run.
2) The veteran will work more innings and deeper into games than the prospect.
3) The veteran serves as a stop gap to give the younger pitchers more time in the minors to develop.

Fogg failed #1 by posting a lackluster 7.58 ERA in 78.1 innings. He failed #2 by averaging less than 5 innings per start. And, he arguably failed #3 because someone like Matt Maloney was probably ready to step in. Perhaps a case could be made that Fogg filled a need, especially given the injury to Daryl Thompson and the ineffectiveness of Homer Bailey, but Fogg was largely an unmitigated disaster and sadly not exactly an unexpected one.

While the Reds may have been right in wanting additional depth as insurance for always volatile young pitching, they'll have to do better than Josh Fogg in the future.
Posted by Lark11 at 8:35 PM