Danny Dorn is a hitter. Plain and simple. With each swing of the bat, Dorn is forcing the Reds organization and baseball experts across the country to sit up and take notice. Oddly enough, neither group seems to be very willing to do so, as Dorn didn't receive an invite to Spring Training or much ink from the baseball pundits. It seems that Dorn will have to drag the doubters, inside the organization and out, with him all the way to the majors.

Another year, another unheralded .900+ OPS for Dorn. If this continues, it'll join "death and taxes" as one of the few certainties of life.

Except for a brief rehab stint at high-A Sarasota, which came after he cut his leg on a sliding catch, Dorn spent the vast majority of the 2008 season with the double-A Chattanooga Lookouts.

Coming up the baseball ranks, hitters just don't see many quality southpaws. However, the higher up the ladder a hitter climbs, the more quality lefthanded pitchers he will face. It's far from an impossible task for a good left-handed hitter to improve against southpaws with more experience, so, at this point, I really wouldn't consider his platoon splits to be cause for concern. On the plus side, his on-base skills remained strong, as his Isolated Discipline was a robust .095. Overall, he really doesn't need to improve all that much against southpaws to be competent.

Dorn's lofty perch on this list is attributable solely to his tremendous hitting ability. Last year's write up on Dorn covered his mechanics, but a swing like his warrants a bit more discussion. 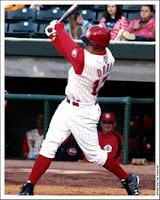 Part of the goal of these write-ups is to breakdown the prospect's mechanics to see if there are any flaws that will hinder his performance as he climbs the ladder. However, in Dorn's case, his swing is pretty much without flaw. It is very fundamentally sound. Even if given the opportunity, I wouldn't change a single thing about the swing in the photo to the right. He has a strong foundation, great balance, his lower body is in sync with his upper body, his head is down on the ball, and he keeps both hands on the bat on the follow-through. The old saying that "a picture is worth a thousand words" rings true in these kinds of write-ups, because everyone once in while you come across a picture that really reveals something about a player. Looking at this picture, you wouldn't need to know anything else about Danny Dorn to know that he can hit.

Dorn stands tall with a slightly wider than shoulder width stance. He has a very quiet pre-pitch approach and waits calmly for the pitch with slow bat waggle and a high back elbow. In fact, his whole hitting approach is very calm and really seems to be comfortable waiting for the pitch to come to him. As the pitch is delivered, Dorn takes a very small stride forward to get his weight moving forward. His swing is short and compact, which makes him very quick to the ball, as a result, he has no problem handling even the best fastballs. In addition, his short path to the ball enables him to let the ball travel deeper and take a split second longer to read the pitch, which allows him to really control the strikezone. He can effectively turn on inside pitches, but he has also become adept at taking the pitch to the opposite field.

When Dorn does fire his swing, his lower and upper body work well together and remain in sync. In addition, the tempo of his swing is very smooth. When a hitter has both good balance and the upper and lower body work in tandem, then the overall swing is likely to be something special. Dorn's swing really doesn't contain any wasted motion, as it's the baseball embodiment of "economy of movement."

Finally, I love that he keeps both hands on the bat during his follow-through. By

and large, what you do after the bat passes through the hitting zone makes little difference, unless of course your top hand comes off so quickly that it prematurely decelerates the bat. Even so, I do prefer a two handed follow through (perhaps for aesthetic reasons more than anything else), but it does ensure that his his swing will remain compact and controlled throughout.

Obviously, the baseball media put more weight on Dorn's other skills, which fall well short of his hitting ability, than his prowess at the plate in determining his overall value.

In leftfield, Dorn is average at best, but he has added some versatility with increased playing time at first base. As of now, he can be competent at either spot. His arm strength is average at best. He throws from a high three-quarter arm slot, which results in his throws tailing off to his arm side and works to rob his throws of carry. However, his arm would certainly pose no problem at either first base or leftfield.

Dorn's foot speed is a notch below average and he lacks first step quickness, which means he isn't much of a threat on the bases and lacks range in the field.

The other issue that requires a mention is Dorn's injury risk. So far in his professional career, Dorn has suffered from some nagging injuries, but they haven't slowed him down at the plate. Ideally, he'll improve his durability as he climbs the ladder.

You can find his MLB draft video here.

Dorn is an interesting prospect. In my mind, he's underrated by all the major baseball media, but I'm sure some will feel that this is too high. And, maybe it will be, but given that Dorn excels in the most important area for a position prospect, I don't think it's too high. Juan Francisco is getting rave reviews and a lot of hype for his recent exploits, but if, as seems inevitable, he does end up moving to first base or leftfield, then should he rate higher than Dorn? Dorn has put up back to back seasons of .900+ OPS at double-A, while Francisco has yet to post an .800+ OPS at any level.

While Dorn's other skills certainly aren't anything to write home about, his ability to hit for average, get on base, and hit the ball out of the ballpark lands him at #8 on the list.
Posted by Lark11 at 11:39 PM