While Juan Francisco's recent performance has him rising to "blue chip prospect" status in the minds of many, a combination of factors actually has him falling in value in my mind. At this point, there doesn't seem to be all that much upside left with Juan, as he has proven himself to be a two tool player (power and strong arm), which limits his overall projection.

Francisco also made the decision to scrap switch hitting and focus strictly on hitting from the leftside. Obviously, the decision paid off, as he hit for a good average and very good power. Unfortunately, hitting from only the left side didn't improve his contact or walk rate.

Here's a video clip of Francisco at the plate. He utilizes both a wide spread stance and an open stance at the plate. He also has a big bat waggle in his pre-pitch stance and some length to his swing, which is due in part to his long arms. As he hustles down the line you can see his slightly stocky build and the problems that additional weight gain will likely cause.

After a solid season high-A Sarasota, Francisco joined Gigantes del Cibao to play in the Dominican winter league. His performance opened more than a few eyes, as he posted a slash line of .360/.419/.665/1.084 to go along with 12 homeruns and a 34/12 K/BB ratio. However, it's important to put his performance in the proper perspective.

The Dominican Winter league is widely regarded as having had very poor pitching this season, which is why offensive numbers are up across the board. This provides a bit more context for Francisco's performance and makes it less impressive than it appears at first glance.

More than anything, it seems to be Francisco's performance in winter ball that has people talking, but at this point I'm not sure it's quite justified. He clearly got a significant boost from watered down pitching and has yet to post an .800+ OPS season in his professional career.

In my mind, the combination of factors that are beginning to decrease Francisco's value are 1) Plate Discipline and 2) Positional Value.

Individually, neither would be an insurmountable problem, but when combined they are a substantial drag on Francisco's value.

The elephant in the room that can't go without comment is Francisco's horrendous control of the strikezone. It's almost indescribable just how bad it is. In 1,268 minor league At Bats, Francisco has walked only 48 times and struck out 327 times. That works out to be one walk every 26.4 ABs and one strikeout every 3.9 ABs. Not the kind of ratios you want to see out of your prospects.

It must be said that it's entirely possible to be a successful big league hitter despite having little ability to control the strikezone. In 2008, Juan Francisco had a BB/K ratio of .154, which would have qualified for worst among all qualified MLB regulars behind Kevin Kouzmanoff, Carlos Gomez, Adam Jones, Jose Guillen, and Corey Hart. Obviously, those players aren't without value, but what they aren't is first basemen. And, ultimately that may be where Francisco ends up.

Players like Gomez, Jones, and Hart have a much broader set of skills and play much more valuable positions than first base. The positional value of a player like Adam Jones or Carlos Gomez allows them to get away with poor strikezone control. It's a lot easier for a player in a premier defensive position to succeed with a flawed offensive approach than it is for a first baseman, because a first baseman's value is driven almost exclusively by his bat. Players in premier defensive positions typically have enough secondary skills (defense, speed, etc.) to offset their poor control of the strikezone. However, that's rarely the case for first basemen, who have to hit and hit well to keep their jobs. 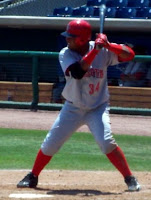 In 2008, Francisco played primarily at third base, but the Reds are facing a logjam at the hot corner. Edwin Encarnacion continues (for reasons beyond my comprehension) to start at third at the MLB level, while Neftali Soto and Todd Frazier are both in the mix for the third base jobs in the system. Ultimately, something has to give and it may well be Francisco, who is beginning to profile better at firstbase. A reality that becomes more likely as Francisco continues to fill out. I've read reports recently indicating that Francisco has added some bad weight to his lower body, which won't help his already below average range.

If Francisco ends up at firstbase, then not only is the value of his power bat diminished, but his only other plus tool is completely negated. Francisco has a very strong arm, but for obvious reasons that just isn't very valuable at first base. At first base, Francisco's offensive game will have to carry him and he just doesn't have the complete offensive skills to be a valuable first baseman.

Not surprisingly, there just aren't many MLB first basemen who exhibit poor control of the strikezone and those who do typically have the ability to hit for a high batting average. Unfortunately, Francisco's high strikeout rate likely will preclude him from hitting for a high average, which would leave him with just the ability to hit for power. Perhaps the best MLB comparison for Juan Francisco is Kansas City Royal Mike Jacobs: a low contact, poor plate discipline, good power first baseman who just isn't all that valuable and likely won't hold onto a starting job for very long.

Ironically enough, Francisco's value may be at an all-time high, but there's also a good chance that it'll never go any higher. Realistically speaking, he's staring a detrimental position change in the face and just doesn't have the hitting skill-set to sustain his value after such a move. Now might be the ideal time for the Reds to consider dealing him. Overall, Francisco still has value, but there are a number of red flags that drag down his upside. For now, he checks in at #9 on the list.
Posted by Lark11 at 11:22 PM