Two things had to happen for me to appreciate Drew Stubbs. First, I had to get over the fact that he wasn't Tim Lincecum. Second, he had to choke up on the bat.

Stubbs was part of the new draft philosophy implemented by scouting director Chris Buckley that emphasizes premium talent at up the middle positions. Stubbs is 6'5", 190 lbs, bats right, and throws right.

The Reds selected Stubbs with the 8th overall pick in the 2006 draft and the Reds signed him for $2M.

Stubbs has had problems with strikeouts throughout his career, so his first season in the Rookie league confirmed a lot of fears. In 2007, Stubbs started out at low-A Dayton.

In Dayton, Stubbs started out the season poorly. He caught fire when the manager, frustrated by team wide offensive performance, forced the entire team to choke up on the bat. After that happened, Stubbs started to pound the ball. He hit .293/.425/.500 in July and .321/.372/.532 in August.

Stubbs is not a player who forces an early consequence to his plate appearances. Accordingly, he will get his fair share of walks and strikeouts, which only happen in deeper counts. However, Stubbs needs to work on reducing his strikeout rate a bit to ensure that he maximizes his offensive potential. That said, his approach does lead to fairly strong on base percentages, so while his contact rate needs improvement, he shouldn't sacrifice his patience at the plate. A high on base percentage is one of the most important things a ball player can have.

It's difficult to believe that a change as simple as choking up on the bat could result in a such a big turn around in performance, but it may well be legitimate. By choking up, Stubbs improved his bat control and may ultimately have unlocked his potential.

Stubbs is a tremendous athlete. He has great speed and massive power. He gets down the line from the right side of the batters box in 4.1 seconds.

At the plate, Stubbs utilizes a nice, quiet approach. He doesn't have excess movement in his batting stance. He takes a slightly wider than shoulder-width stance and a normal length stride. Stubbs has a smooth, fluid swing without any hitches. He maintains good balance and tempo throughout his swing. Most right-handed swings don't look visually appealing to the eye, but Stubbs has one that measures up. However, his swing does get long, which is where his strikeout problems come into play. In addition, the longer swing can make him susceptible to offspeed pitches. It'll be interesting to see if choking up on the bat shortens up his swing and gives him greater bat control, both of which would increase his contact rate and decrease his strikeouts.

Stubbs is also very fast and possesses good first step quickness. He has a long stride that chews up a lot of ground. His speed translates well both on the bases and in the field.

You can access Stubbs' MLB draft scouting video here and you can access a video interview with Drew Stubbs here.

Stubbs has all the tools to be a tremendous offensive talent. However, tools don't always translate into performance. Even so, Stubbs may have figured out something very important last season.

Stubbs is one of the best defensive players in the Reds' farm system. He's already considered to be a gold glove caliber center fielder. He has great range, gets a great read on the ball, and has a solid arm. His arm isn't great, but it plays average.

Overall, Stubbs is a premier defensive talent at a premier defensive position, something that has been sorely lacking in Cincinnati as of late. At the big league level, the Reds have been plagued by poor defense. In fact, defense, even more than pitching, has largely been responsible for the Reds continuing struggles. Stubbs is the first attempt by scouting director Chris Buckley to rectify this problem. Stubbs addition to the farm system immediately improves the Reds centerfield depth and provides a potential impact glove for the Reds in the future. 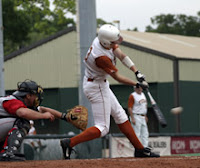 When you watch Stubbs play, it's not difficult to see what the Reds liked about him. He looks like a natural. He moves well, throws well, runs well, and has light tower power. If he can improve his contact rate, he'll be an impact offensive player. Given his defensive talent, he won't have to hit much to be an everyday starter at the big league level. However, he does have substantial upside which could one day make him an All-Star.

While he has drawn comparisons to Dale Murphy, Stubbs more likely projects to be Mike Cameron. Regardless, if Stubbs actually turns out to be either the former or the latter, the Reds will be more than satisfied. He'll only be 23 in 2008, so he has time to develop, but if his new approach at the plate is legitimate, then he could move quickly.

Stubbs resurgence on offense coupled with his impact glove lands him at #5 on the list.
Posted by Lark11 at 10:01 PM