Leading off the list of "other notables" is J.C. Sulbaran. He's the obvious choice, because he's hands down the most intriguing. The Reds selected Sulbaran in the 30th round of the 2008 draft. He was drafted out of American Heritage High School in Plantation Florida, which is the same school that produced top Royal prospect Eric Hosmer.

Sulbaran was set to attend the University of Florida, but the Reds were able to get him signed to a professional contract. Sulbaran works with three pitches: a 90-94 mph fastball, a very good biting curveball, and a changeup. At 6-2, he has good height for a pitcher.

Even before throwing a professional pitch, there was already a bit of buzz surrounding Sulbaran. He managed to open some eyes with impressive performances on the international stage for the Dutch national team. Sulbaran put together two solid performances against the Cuban national team. As a young fresh out of high school pitcher, his performance was rather impressive. However, there just wasn't an established baseline of performance on which to base his evaluation, so he landed in the "Other Notables" category. However, if his subsequent performance in the World Baseball Classic is any indication, Sulbaran could climb into the top 10 on the 2010 list.

In case you missed it, here is how Sulbaran dealt with Ivan Rodriguez during the WBC. Good morning, good afternoon, and good night, Pudge!

I'm still higher on Janish than most. As I mentioned in the Chris Dickerson write up, I think the Reds should give extra weight to prospects who provide plus defense and plus strike zone control from premier defensive positions.

Janish has a short, quick, compact swing and a good eye at the plate. The Reds want Janish to work to improve the strength in his forearms and wrists, which can only help him reduce his strikeouts and allow him to do more with the balls he puts into play.

He'll never be a star, but I still believe he has the potential to be a sneaky good value at the shortstop position. 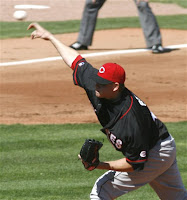 Smith is an intriguing pitcher. The Reds selected him in the 6th round of the 2006 draft out of Community College of Southern Nevada. His pitching profile is good control, high contact, heavy ground ball pitcher. He's not a big strikeout pitcher, but he throws a heavy sinking fastball. In addition, he features a good slider and a mediocre changeup.

In 2008, his stellar performance at high-A Sarasota earned him a promotion to double-A Chattanooga. Unfortunately, his stint at double-A didn't go quite as smoothly. His performance level wasn't very high, but later in the season it was revealed that Smith had been trying to pitch through torn cartilage in his knee. It'll be interesting to see just how big of a role the knee problem played in his 5.40 ERA.

Obviously, ground ball pitchers are desirable in Great American Ballpark, but I'm not sure his ceiling is high enough to project him as a starter. It was a bit surprising to see Baseball America rate him as the 13th best prospect in the system. Ultimately, he may be better suited to the bullpen.

Heisey is a well rounded prospect and a good example of how hard a prospect has to work to shed an early label. He has never been given respect by the scouting community, so he is constantly working to prove them wrong. He went to Messiah College in Pennsylvania and was selected by the Reds in the 17th round of the 2006 draft.

Heisey has a career slash line of .291/.365/.433/.799. He doesn't have any tools that really stand out, but his drive to succeed and his baseball IQ cause them to play up a tick. His baseball IQ certainly helps him on the bases, as he swipes bases at a good clip. Ultimately, Heisey's best attribute is his plus defense. He has the ability to play all three spots in the outfield. However, on the offensive side Heisey still projects best as a 4th outfielder. Unfortunately, he has a heavy platoon split, which as a right-handed hitter leaves him on the short side of the platoon. In his minor league career, he has a .913 OPS against lefthanded pitchers and a .779 OPS against righthanded pitchers. In addition, Heisey's line drive rate leaves something to be desired.

As you can see from the following video-clip, Heisey utilizes a simple, compact swing that has served him well. However, he'll only go as far as it will take him. At this point, it remains to be seen if he has enough offensive upside to be more than a utility outfielder at the MLB level. 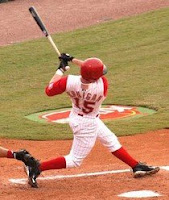 Hanigan is a solid professional. Surprisingly enough, he was signed by the Reds as an undrafted free agent. He doesn't have many true weaknesses, but he also doesn't have any major strengths. Perhaps his most valuable attribute is his ability to control the strike zone. Not only does he post a strong walk rate, but his high contact rate allows him to post good batting averages. Hanigan also possesses a solid defensive skill set, which should ensure that he'll have an MLB career of some kind. Catchers with good defensive skills don't have to provide much offense to justify an MLB roster slot.

Unfortunately, he's already 28 years old, so there isn't much upside left. At this point, what you see is what you get with Hanigan. And, obviously, the Reds aren't convinced that he can shoulder a big role. After trading for Ramon Hernandez to be the number one catcher, the Reds seem to have penciled Hanigan in as the backup catcher for the next few years.
Posted by Lark11 at 10:04 PM