One of the comments on my last post got me thinking more about the Reds pitching coach vacancy and why Leo Mazzone is truly the best option.

The Herd, Tony, and Big Ben

I was listening to Colin Cowherd on ESPN radio and he made an interesting comparison between Tony Romo and Ben Roethlisberger. This will likely be the only time football gets a mention on this blog, but the underlying concept is intriguing and would seem to have parallels to baseball. 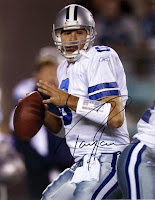 If you have any exposure to ESPN or sports talk radio, you know that Tony Romo is constantly raked over the coals, while Big Ben is continually lionized. However, Cowherd posited that if you were to switch the two quarterbacks, then their respective levels of success would switch as well, and not because of the different personnel. He suggested that the differing levels of success experienced by Romo and Roethlisberger were the result of organizational structure.

The Cowboys are an undisciplined, flamboyant, star oriented organization, while the Steelers are very structured, disciplined, and team oriented. In the Cowboy system, Romo feels the need to do it all by himself when the game is on the line, whereas the Steelers have established a team-first style that doesn't require Big Ben to try to do too much. The respective organizational structures enable one quarterback to excel, while causing the other to fail.

To a certain extent, I think this is true in baseball as well. If you look at the best organizations, then you notice that everything just seems easier for them. The players they draft tend to be good values. The players they develop tend to develop faster and fit easily into the MLB lineup. The free agents they acquire tend to fill defined roles that put them in a position to succeed. Everything just works.

The reason why it "just works" for the best organizations is that they have consistently put talented people into management and coaching positions. They have had such elite talent in these positions for so long that they begin to change the culture of the organization. The players begin to buy into the program, which only serves to reinforce it in the clubhouse and with the newly acquired players. The talented coaches and front offices personnel imprint the organization with their knowledge and ability. Over the years, the impression on the organization gets deeper and deeper as their influence gets greater and greater. The impression gets so deep that it begins to channel talent much more efficiently to the Major League level, which is a significant advantage over other organizations. The value of efficiency in the organization cannot be overstated.

In short, everything just seems to be ~10% easier for these organizations, because they have built up this structure and organizational intelligence. It gets to the point where it becomes less about the particular players, because so many players work within the structure. It becomes easier to acquire talent and part ways with that talent when it is advantageous to do so. For teams that struggle to overcome a faulty organizational structure in acquiring talent, it is more difficult to part ways with that talent. In fact, they may hang onto that talent for too long because they fear they will struggle to replace it.

Imprinting the organization with an intelligent, effective structure is key. In essence, it's the difference between swimming with the current and swimming against it. The Reds have a chance to hire a mere pitching coach or a Hall of Fame caliber talent who can define the pitching philosophy for the entire organization. Hiring a coach like Leo Mazzone would help create a bit of organizational structure that has been lacking in Cincinnati for quite some time.