In a modern professional sports context, that's pretty much peanuts. Metaphorically speaking, MLB organizations have that much laying around between the cushions of their couch.

And, sadly, in this instance it represents a missed opportunity, as $3.5M is the difference between Ramon Hernandez's new $2M salary and the 2010 salary of Curtis Granderson ($5.5M). This meager difference in salary between the two is simply not reflective of the massive difference in ability and production. 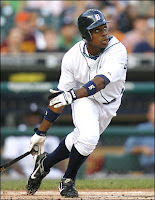 The Reds have been crying poverty and doing everything they can to reduce fan expectations for this offseason. Even so, it's impossible to believe that the organization can't scrape together enough cash to make this move.

First, let's address the elephant in the room: the Scott Rolen trade. I am on record as being in favor of this deal. And, I still like it. In 2009, the Reds thirdbase troika of Edwin Encarnacion (2009 Wins Above Replacement: 0.0), Adam Rosales (2009 WAR: -0.1), and Jerry Hairston Jr. (2009 WAR: 1.0) provided essentially replacement level production.

This is just a rough and dirty look at their win impact, but it's a generally accurate view of their impact on the team's W/L total. I didn't break out the WAR figure to account for solely performance at the hot corner, so Hairston Jr.'s WAR is inflated by the time he spent at more valuable defensive positions. So, the Reds truly did receive replacement level production at third base.

So, the acquisition of Scott Rolen has the potential to have a significant impact on the Reds W/L record. In 2009, Rolen posted a 3.8 WAR for the Jays and Reds. If Rolen can stay healthy (yes, perhaps a big "IF"), then he could be in line to improve the Reds by 4+ wins. He should get the requisite bump from switching to Great American Ballpark, so the trade that everyone panned could improve the Reds significantly in 2010.

However, the latest news on the deal is that the Reds are on the hook for all of Rolen's 2010 salary. Of course, Rolen is set to make $11M in 2010, while Edwin is making $4.75M. So, without any money coming from the Great White North to cover the cost of Rolen's salary, the Reds increased their payroll by $6.25M with this deal. And, to be honest, it may well be worth it. Even so, if the Reds entered into that deal in the knowledge that they wouldn't be able to add salary to improve the team over the offseason, then it becomes a little less defensible. In a vacuum, it's a solid deal, but the Reds need to bite the bullet and make another move to improve the 2010 team.

Personally, I think it's a huge mistake not to aggressively pursue Curtis Granderson. The Tigers are widely reported to be looking to shave payroll, as Detroit is being hit hard by the recession. Obviously, in exchange for their veteran players the Tigers are looking for young, cost controlled players/prospects. And, what do the Reds have in surplus? Prospects!

I'd offer up Yonder Alonso and one of Juan Francisco/Chris Valaika/Chris Heisey. Is there any doubt that Granderson would provide more total value (offense + defense) than shifting Votto to left to accommodate Yonder at first?

Granderson is a plus defensive player who would be in the discussion for best defensive leftfielder in baseball. And, while he struggles with southpaws, Granderson has a great blend of power and speed. He also draws a significant number of walks and would immediately solve the Reds leadoff hitter dilemma. His addition would give the Reds three top notch lefties (Granderson, Votto, Bruce) to go with three top notch righties (Phillips, Rolen, Stubbs).

The Scott Rolen trade is solid in a vacuum, but it looks better if the Reds pair it with the acquisition of another 4-5 win player. If the Reds do that, then they could be looking at significant improvement. If the Reds were to get aggressive, then maybe a 78 win team in 2009 becomes an 85-88 win team in 2010.

The Reds need to have the foresight to position themselves to take advantage of the market. The nation wide recession has created significant bargains around the league, but only those teams who have positioned themselves to take advantage of them will benefit. If the Reds can afford to throw $2M at Ramon Hernandez, then they could have afforded to pay Curtis Granderson $3.5M more to play for the Reds. I don't think there is any question which player will provide more value and wins in 2010.

This is the type of move the Reds should be looking to make. Adding a young player who is under contract through 2013 and who can help the team win...now!
Posted by Lark11 at 10:05 AM