After finding a sneaky good value from Cal State Fullerton in Danny Dorn, the Reds once again returned to the well in 2009 in hopes of finding another good value in Josh Fellhauer. The Reds selected Fellhauer with the 209th overall pick in the 7th round of the 2009 draft. 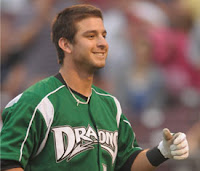 Fullerton is an elite college baseball program that produces polished, well-rounded players, so perhaps it should come as no surprise that players drafted in the mid-to-late rounds out of Fullerton more than hold their own in the professional ranks. These mid-to-later round CSF guys may not have the best tools or athleticism, but they certainly seem to know how to get the most out of their ability.

Fellhauer played three years for the Titans. He started out his collegiate career as a platoon outfielder, but emerged as the starting leftfielder and one of the better hitters on the team as a freshman. He ended up the season with a slash line of .304/.379/.429/.808, which is a solid debut season for a freshman.

As a sophomore, Fellhauer was the everyday centerfielder and was selected to the All Big-West Conference Second Team. He took his offensive game to another level in 2008 by adding more power, as he posted a .335/.392/.517/.909. He posted a 10 game hitting streak and two 6 game hitting streaks. He finished 2nd in the Big West Conference with 62 runs scored, 3rd in hits with 90, 3rd in doubles with 20, 6th in triples with 4, 2nd in total bases with 139, and 9th in stolen bases with 17.

In 2009, as a junior Fellhauer posted his best ever collegiate season. He flashed an intriguing, well rounded offensive game against top collegiate competition. On the season, he hit .396/.480/.529 with 6 homers, 18 stolen bases, and a 26/26 K/BB ratio. Obviously, there are some significant positives, but a few red flags as well. His 18 stolen bases come with 13 caught stealings. And, as impressive as his isolated on base percentage is, it was achieved in part by 16 hit by pitches. Now, there is nothing inherently wrong with using the hit by pitch as an offensive weapon (Craig Biggio used it to great effect), but it remains to be seen whether he will continue to use it as a weapon in the professional ranks. It's one thing to leave your elbow out over the plate against a collegiate curveball, but it's something else entirely to do it against a big league caliber fastball.

Overall, Fellhauer has continued to improve his game as he has gained more experience. He doesn't seem to have any true standout tools, but his offensive game is well-rounded and he can certainly hit. In addition, he has baseball in the bloodlines, as his grandfather, Richard, played for the St. Louis Browns and his father, Robert, was a 6th round draft pick of the Oakland A's as a shortstop.

In 2008, Fellhauer was selected to play for Team USA in the FISU World Championship. The team went 24-0 to win the gold medal. He played all three outfield positions, hit .299 with two homers, 6 doubles, and stole two bases. He obviously built on that experience during his impressive junior campaign at Fullerton. It's always a good sign when a player has success at the international level, as well as in collegiate ranks.

After agreeing to terms, the Reds sent Fellhauer to low-A Dayton to begin his professional career. At Dayton, Fellhauer posted a slash line of .280/.351/.453 with a 34/19 K/BB ratio, 7 homers, and 7 steals in 264 plate appearances and 57 games. Solid production, but nothing really eye popping. Interestingly enough, Fellhauer DID continue to utilize the hit-by-pitch in his offensive arsenal, as he was plunked 7 times in 2009. He also demonstrated a fairly substantial platoon split, posting a .720 OPS against lefties and an .826 OPS against righties. Of course, that is fairly common among lefthanded hitters, as they simply don't see all that many quality southpaws in the amateur ranks. It typically takes time and experience to adjust to the better lefthanded pitching at the professional level.

For Dayton, Fellhauer hit line drives at only a 16% clip, which certainly leaves something to be desired. However, he made contact at a good rate and continued putting the ball in play with great frequency (12.9% K rate). Unfortunately, he struggled to drive the ball with authority when he did put it into play. It was a small sample size and his first taste of pro-ball, but if his performance at Dayton was indicative of his true baseline of performance, then he will need to continue improving his overall game as he climbs the ladder.

At the plate, Fellhauer uses a quiet approach. His stance is slightly open and a bit wider than shoulder width. He uses a very small stride to trigger the weight transfer and close up his stance. He maintains good balance and exhibits good body control throughout the swing. His hand position originates in front of his left shoulder and he brings them back into hitting position as the pitcher gets ready to deliver the ball. As his weight transfers, Fellhauer uses good hip rotation to clear them out of the way and generate bat speed. He keeps his head down on the ball and uses a compact, line drive swing that allows him to center the ball on the barrel of the bat. On his follow through, he keeps both hands on the bat, which arguably limits his extension and perhaps even saps his power, but increases his bat control and stability throughout the swing.

His swing caught the eye of Ken Griffey Sr., who is acting as an assistant to the minor league personnel director, who said “He reminds me a little of Chase — he has a swing like Utley’s. I watched Chase from AA until he got to the big leagues.” And, not surprisingly, Fellhauer didn't object to such an impressive comparison, stating with a laugh, “I’ll take that. (Utley) stays inside on the ball and sends it to all fields.” So, obviously I'm not the only one who is impressed with Fellhauer's swing.

Here is a look at his swing, courtesy of RedsMinorLeagues on YouTube:

Overall, Fellhauer has a nice, compact swing that enables him to be quick to the ball and make consistent contact. If you want to take a look at his throwing arm or see more of his swing in action, then definitely check out this scouting video from MLB.com.

On the defensive side, Fellhauer has a solid arm and runs fairly well. While playing for Fullerton and Team USA, Fellhauer spent time at all three outfield positions. Obviously, versatility is a good thing, but in this case it may be supportive of the premise that his range is stretched in center.

The Reds used him in centerfield 41 times in 2009 and in rightfield 12 times. Minorleaguesplits.com rates him as having below average range in center and average range in rightfield. Obviously, it's a very small sample size and fielding metrics are not absolute, but proving to be able to competently handle a premier defensive position would allow him to get away with a lower level of offensive performance. Given his lack of impact power, the Reds are likely to leave him in center unless he proves that he can't handle it.

Fellhauer is an interesting prospect and one that I want to like even more than I do. He has the smooth swing, intangibles, and polish that I like to see in prospects, but I am finding it somewhat difficult to set forth reasons for true optimism about his prospects for a significant MLB career. Fellhauer is a polished college prospect who does everything well, but nothing great. He's a "jack of all trades, but master of none" type. He simply doesn't have a stand out tool that would help him progress up the ladder. Given his current baseline performance, Fellhauer is going to have improve in one or several areas to have a legitimate chance at carving out an MLB career. Ideally, the improvement would come in his speed, power, or on-base skills. Unfortunately, I'm struggling to find an area that he will be able to improve upon to any significant degree.

Fellhauer lasted until round 7 because of his lack of plus tools. His tools all grade out pretty average across the board. In addition, his smaller frame simply doesn't allow for a great deal of physical projection, so it's not easy to predict a significant spike in power as he continues to develop. His speed also isn't something that he's going to be able to improve upon in any meaningful way. Finally, his on-base skills are solid, but are currently being aided by the hit-by-pitch, so I'm not sure his ability to control the strike zone is even as strong as it may look at first blush and anyway that's an area where significant improvement is typically difficult, if not impossible.

So, where does the needed improvement come from?

Fellhauer has a nice, well-rounded game and he certainly knows how to hit. In addition, he strikes me as the kind of player whose overall game is something greater than merely the sum of the individual parts. Those are the types of players for whom it is always easy to root. However, despite his compact, fundamentally sound swing, things would seemingly have to break just right in order for him emerge as an every day MLB player. What he does, he certainly does well, but I'm just not sure how much projection he actually has left. He needs to take his baseline level of performance up a notch, but he may already be bumping his head on the ceiling.

For now, Fellhauer checks in at #24 on the list. He'll need to find and unlock some additional potential in order to climb up higher in the future. Hopefully, he'll be able to make some adjustments to do just that as he enters his second season of professional ball. He certainly has the swing to do so, but he'll need to pair it with some secondary skills to really increase his production and value.
Posted by Lark11 at 9:18 PM