With the World Series in the books, the Hot Stove is beginning to heat up.

Given the fiscal constraints, the Reds will likely be targeting only undervalued players with upside. If that's the case, the first name on the list should be former Giant Noah Lowry. If southpaw Lowry is 100% healthy, then he could be the steal of the offseason.

Here is a blurb from the San Francisco Chronicle about his impending departure from the Giants organization: 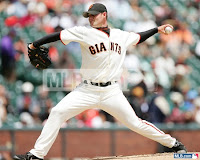 "Noah Lowry, who last pitched in 2007, will become a free agent today when he is removed from the 40-man roster, not surprising given his arm saga and hard feelings over his care.

Lowry's agent, Damon Lapa, said he was informed of that by the Giants today and added in an e-mail, "Noah is completely healthy throwing three days a week on his normal offseason program without any restrictions. Lowry will be removed from the Giants' 40-man roster and become a free agent."

It was a given that his $6.25 million option for 2010 wouldn't be picked up. Lowry has missed the last two seasons because of elbow/forearm issues that he believes the Giants misdiasgnosed. He was 14-8 with a 3.92 ERA in his last healthy season in 2007."

Lowry is an intriguing pitcher. He's a power pitcher without the power stuff. His fastball only sits around 87-88 mph, but he his best pitch is a plus-plus change-up. Even without a dominating fastball, Lowry is fearless. He attacks hitters with the velocity differential between his fastball and change-up. He also utilizes both a curveball and a slider. His bulldog demeanor on the mound has allowed him to be truly dominant over significant stretches of time despite not having dominating power stuff.

A funny thing happened in 2006 and 2007. Lowry's strikeout rate began decreasing while his groundball rate began to increase. I suspect that it was the result of his forearm struggles, but at this point it would difficult to know for sure what type of pitcher Lowry will be upon his return to the show. So, there is a degree of risk, but that's why he comes at such a reduced cost.

The Reds could use another solid starter in the rotation, especially one who throws from the left side. Lowry wouldn't have to bounce back too far to be an asset at the back end of the rotation and he could bounce back much farther than the 5th spot.

I've always liked Lowry's game and if he finally is 100% healthy, then he could be a very nice addition to the team. At the very least, the price is likely to be right, as he will have little bargaining power and, regardless, is likely to value an opportunity to start at the big league level over maximizing his 2010 salary. A low base salary with some built-in incentives might be enough to get it done.
Posted by Lark11 at 8:25 PM