system. He has an intellectual approach to pitching that enables him to objectively analyze his game to identify weaknesses so that he can improve upon them. And, his hard work has really begun to pay off, as he has elevated his game to the next level. Odd as it may sound, Klinker has actually managed to improve his baseline level of performance while climbing the developmental ladder. It's rare to see a pitcher improve against more advanced and challenging competition. Obviously, performance usually tails off as the competition improves. Klinker, on the other hand, has gotten even better as the competition has gotten better, which may well be a testament to both his hard work and impressive pitching IQ.

The Reds selected Klinker in the 15th round of the 2007 draft with the 469th overall pick. Klinker has pitching in the blood, as his father was a pitcher for Purdue University. Klinker was a draft eligible senior out of Furman University when the Reds called his name. He is yet another tall pitching prospect, which, of course, gives him additional room for growth and physical projection.

He obviously had some potential, but lacked the electric stuff that tends to turn the heads of the scouting world, which is why he was still on the board when the Reds selected in round 15.

In 2009, Klinker was another prospect in the Reds system who made the rather unusual three level jump (Logan Ondrusek being another). Given the Reds typically conservative player development strategy, it was a surprisingly aggressive course that they charted for Klinker. The truly interesting thing about Klinker is that he's pitching better than he has at anytime in recent memory, including his time at the collegiate level. 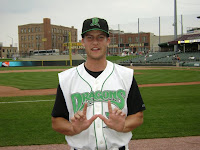 Obviously, the Reds looked beyond merely his ERA and WHIP in their decision to promote him to double-A Carolina. It didn't take long before he was making quick work of the more advanced level of competition. In 36.2 innings, Klinker posted a 2.95 ERA, 1.09 WHIP, 3.2 BB/9, and 9.8 K/9. Despite his gaudy ratios, his FIP was only 4.29, as he was aided by a BABIP of .249 and a strand rate of 89.0%. So, he wasn't quite as strong as it appears at first blush, but it wasn't long before he was bumped up the ladder yet again.

The surprising part of Klinker's performance in 2009 was that he posted the highest strikeout rate of both his collegiate and professional career. He had not previously topped the 9.0 K/9 mark at any level, but managed to do it against the advanced hitters in double-A and triple-A. His continued refinement of his offspeed pitches has improved his ability to generate swings-and-misses when he needs them. Not many pitchers improve as the competition improves, but the effectiveness of his riding fastball against wood bats and the continued development of his offspeed pitches has enabled Klinker to do just that.

Klinker features a two-seam fastball that he can effectively ride-in on the hands of right-handed hitters. This is actually a pitch that is more effective in the professional ranks, as it can break the wood bats. At the collegiate level, a pitch in on the hands can still be muscled into the outfield for a hit with the metal bats. His command of the fastball is one of his biggest strengths on the hill. He also utilizes a somewhat loopy 12-to-6 curveball. He has tightened it up and refined it as of late, which has improved its effectiveness, but it's still more of a slurve than a hard-biting off-speed pitch. He also uses a circle-changeup and has experimented with a split-fingered fastball to improve his effectiveness against left-handed hitters. Early in his professional career Klinker struggled to find a consistently effective offspeed pitch, but he has begun to improve his secondary offerings.

Klinker utilizes simple, straightforward mechanics that don't involve any wasted motion. He is very economical in his movements. He stands tall on the mound and begins his windup with a small step back while bringing his hands up to his chest. He then shifts his right foot down onto the rubber and brings his left leg up into his leg kick.

Klinker's leg kick rises up higher than parallel with the ground and his toe points down to the ground. At the apex of his leg kick he incorporates good hip rotation to build up energy to impart on the baseball. As he uncoils his leg kick and begins to drive towards homeplate, he gets a good push off the rubber. As he strides toward the plate, his glove-side arm rises up into a higher than normal position and his glove actually rises well up above shoulder level.

Klinker's arm slot is a three-quarter arm-slot, which prevents him from maximizing his ability to throw on a downward plane, but certainly seems to work for him. In addition, his arm action involves a slight cross-fire action.

His plant foot on the stride lands slightly closer to the thirdbase side, which is a slightly closed-off position. The position of his plant foot requires him to throw slightly across his body, which also results in him falling off to the firstbase side on his follow-through. Despite falling off to the first base side, Klinker generally maintains good balance and body control throughout the delivery.

There is one potential flaw in Klinker's delivery. The timing in Klinker's delivery is somewhat off, as his upper body isn't in sync with his lower body. His pitching arm lags behind his lower body, as evidenced by the photo to the right. In a perfectly timed delivery, the pitching arm is up in throwing position when the plant foot lands. In Klinker's case, his arm is horizontal to the ground, rather than vertical with the ball up around head level. The arm lag robs the throwing motion of efficiency, as the momentum drive towards the plate has to wait on the arm to catch up. It's not surprising that Klinker's timing is off, as taller pitchers frequently struggle to maintain good body control over the longer levers and torso. Despite being a taller pitcher, Klinker doesn't struggle very much with consistency in his delivery, but his arm does tend to lag a bit.

There are some really impressive photographs showing Klinker's pitching mechanics during a side throwing session available here.

Conclusion
Klinker may be the rare case of a late bloomer who has earned legitimate prospect status through hard work and study. As he continues to develop and improve his ability to locate his secondary offerings, he could continue to build on his breakthrough level of performance. While both he and Logan Ondrusek made stops at three levels in 2009, Klinker's much more impressive strikeout and walk ratios and the fact that he worked as a starter make him a better bet to sustain his breakout performance. Still, the 2010 season will provide an important data point on Klinker's career trajectory. It'll be interesting to see if he can maintain his new level of performance or if he'll regress and give back some of the gains he made in 2009.

Klinker is the type of pitcher who gets the absolute most out of his abilities, which when coupled with his refined secondary offerings is enough to land him at #15 on the list.
Posted by Lark11 at 8:38 PM