I've always liked Janish and what he brings to the table, but if he's going to be the every day starter, then he has to bring just a bit more on the offensive side. Not a ton more, but a bit.

When you play elite defense at a premier defensive position, then you can get away with minimal offensive production, especially in the first three years of your MLB career. The efficiency of production in a young player is difficult to match.

So, what about Janish's offensive game? Is there hope?

Some additional thoughts on Janish. 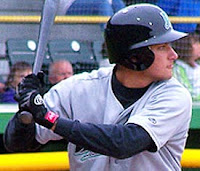 First, I'll say I like his approach at the plate. He uses a calm approach and a compact swing that gives him a short path to the ball and allows him to stay balanced throughout his swing. And, his swing generates a lot of line drives. It's not award winning, but it should/could be serviceable.

1. Janish has good plate discipline. In the minors, his career OBP was 0.90 points higher than his batting average, which is impressive, especially so for a middle infielder.

So, he knows how to control the zone and draw a walk.

2. For his MLB career, Janish is making contact when he swings 83.9% of the time. Not great, but certainly not bad. In addition, his K/AB percentage at the MLB level is 17.3%, so he strikes out less than 1 out of every 5 at bats. Again, very respectable.

3. As for type of contact, Janish again is surprisingly strong, as evidenced by his MLB career line drive rate of 19.8%. When he makes contact, he hits a lot of line drives.

When you add those factors together, you have the makings of a productive hitter. He draws his fair share of walks, makes contact at a good clip, and when he makes contact he hits a high percentage of line drives.

So, why is hitting a paltry .211 when he doesn't strike out an exorbitant amount and hits line drives at a good clip? Given his components, one would think that he would be a bit more productive. His BABIP was .230 in 2008 and .247 in 2009, but I'm not sure we can chalk it up to luck.

Here, in a nutshell, is the real problem with Paul Janish: infield fly balls.

In each of his 2008 and 2009 seasons, his infield fly ball rate was 16%, which is very high. So, when he hits the ball in the air, 16% of the time it stays on the infield. And, unfortunately, infield flyballs are the absolute worst type of ball in play you can have, as they result in an out 95%+ of the time. In essence, it's an automatic out.

The question is why does he hit so many infield flyballs and is it going to be a consistent problem?

Obviously, a lack of power has something to do with it. He simply doesn't drive the ball with much authority, so it doesn't leave the infield. Still, that's not entirely it, as Rocco Baldelli is another hitter who consistently posts high infield fly rates (15% for his career), but one who has no shortage of power. So, it's not just a lack of power and it's not likely a problem that is going to go vanish on its own.

I don't have any evidence to support it, but I suspect that he simply chases too many high fastballs. He doesn't have the bat speed or power to effectively handle and hit the higher fastballs. Whatever the reason, if he can chop that rate down by a handful of percentage points, then all of a sudden his walk rate, contact rate, and line drive tendencies will work more effectively to raise his level of production. It sounds simple, but I suspect cutting down on the infield flies would be enough of a difference maker to make him a viable starting shortstop at the MLB level. It could raise his batting average and OPS just enough to exceed the threshold level to be a viable every day player.

As it stands now, Paul Janish might be the least effective hitter in all of baseball when he hits the ball in the air. His 16% infield flyball percentage and his dreadfully low 1.7% HR/FB mark indicate that he should hit the ball in the air as infrequently as possible. He rarely hits homeruns and frequently doesn't get the ball past the infield. Unfortunately, it's not just the percentage of flyballs that don't leave the infield that give him problems, but also the overall percentage of balls that he hits in the air.

To compare Janish to a couple of players, David Eckstein and Adam Everett, who boast similarly atrocious power, it's clear that Janish just hits the ball in the air all too often.

The obvious problem is that Janish isn't hitting enough balls on the ground. David Eckstein also lacks any semblance of power, but he's smart enough to recognize this and respond accordingly by hitting the ball on the ground at very high rate. And, ultimately, there really isn't all that much difference between Janish and Adam Everett.

Of course, that only deals with the type of contact and omits the rate of contact (Eckstein: 92.2%, Everett: 82.4%, and Janish: 83.9%). Obviously, Eckstein is a more effective hitter because of both the contact rate and the type of contact he generates. On the other hand, there isn't much difference between Paul Janish and Adam Everett. Janish has a better contact rate and higher line drive percentage, but Everett has a bit more power and hits the ball on the ground a bit more.

Ultimately, it would seem to me that Janish, with a tweak or two in his approach, could improve his production to get to an acceptable level. It seems like hitting more balls on the ground is the type of change that could actually be made with the help of some good coaching. Now, even the end result wouldn't be a Barry Larkin type level, but rather an absolute bare minimum level of competence with the lumber. Everett and Jack Wilson are similar glove-first type players and they have gotten away with career OPS marks of .648 and .684 respectively. Not much higher than where Janish is now and just a bit of improvement would get Janish to that level.

Obviously, there is a risk that Janish doesn't take a step forward on offense, but by that time Zack Cozart, Chris Valaika, or another option will likely present itself.
Posted by Lark11 at 11:16 PM