Picking up on my Comments from the Matt Klinker post, Josh Ravin is an example of a pitcher whose development may not follow the path of predictable, incremental improvement, but one who still could make a significant breakthrough to a new level of performance. Position prospects typically follow a more standard, linear development curve, one with incremental, steady improvement. On the other hand, pitching prospects are much more volatile and unpredictable, which makes them capable of more rapid and unexpected improvement.

Despite the struggles in his early professional career, Ravin will head into the 2010 season at the ripe old age of 22, which is the equivalent of a senior coming out college, so he has time to develop into an MLB caliber pitcher. He still has a long way to travel on the development curve, but he certainly took a small step forward in 2009.

The Reds selected Ravin in the 5th round of the 2006 draft with the 144th overall pick. Ravin was selected out of Chatsworth High School in California, which has a very strong baseball program, producing former first rounders Mike Moustakas and Matt Dominguez.

Ravin has a very good build for a pitcher, standing 6-4 and tipping the scales at 220, which gives him good height and a strong core. He incorporates his lower body effectively in his delivery and reduces the stress on his arm with a strong lower half.

In 2009, Ravin took a significant step forward in his development. The Reds sent him back to low-A Dayton, the level where the wheels came off the wagon in 2008. In 2008, Ravin pitched 56.1 innings for Dayton, posting a 7.19 ERA, 1.86 WHIP, and a 47/50 K/BB ratio. His walk rate was almost unbelievably bad at 8.0 BB/9. He completely lost the plate and was ultimately demoted down to the rookie league Billings Mustangs.

Fortunately, his repeat engagement went much more smoothly. In 2009, Ravin tossed 81.0 innings compiling a 3.67 ERA, 1.30 WHIP, and a 66/40 K/BB ratio. His command and control were dramatically improved, as evidenced by his 4.4 BB/9 mark, which was roughly 3.0 fewer walks per nine innings than in the previous season. And, he continued his high strikeout ways, posting a strong, but career low, K/9 mark of 7.3. His performance was legit and represented a breakthrough to a new level of performance, as his components were strong and supported the ERA and WHIP that he posted. His FIP was a solid 3.88, his BABIP was a bit low at .273, and his strand rate was also a bit low at 65.1%.

The high point of his season was his June 14th start against Lansing when he tossed 6.0 innings of two hit ball. In the game, he gave up 0 runs and posted an 8/2 K/BB ratio. That start was fairly typical of his performance in the month of June, which was by far his best month of the season.

Unfortunately and perhaps a bit surprisingly, Ravin's season was cut short by a right elbow strain. He was originally expected to miss only a single start, but it ended up costing him the season. While an elbow strain can occasionally be the precursor to a more serious injury, reports are that he's fine and is ready to roll when the 2010 season starts. In light of his strong pitching mechanics, it's somewhat curious to see Ravin succumb to injury. Even so, it's a good example of the principle that strong mechanics merely reduce injury risk, not eliminate it entirely. In Ravin's case, his struggles with his command make him rather inefficient with his pitches, which in turn increases his workload and, subsequently, the stress on his pitching arm.

It's unfortunate that the injury arrived at a time when he was pitching his best baseball of the season and, perhaps, his career. Hopefully, to start off the 2010 season Ravin will be able to pick up right where he left off in June of 2009. If so, he'll be ready to take the next step in his development.

Ravin throws a good, heavy fastball with late life that sits around 92-94, but can touch 95+. He also works with a solid, but inconsistent curveball that has plus potential and throws a change-up. Part of his struggles come from an inability to consistently spot his curveball. If he can't get the curveball over, then he becomes overly reliant on the fastball, which makes him easier for the competition to figure out. He needs to become more consistent with his secondary offerings to keep the hitters off balance. An effective curveball with two plane break would enable him to change the eye level of the hitters.

Ravin has some of the best pitching mechanics in the system. He has an easy, fluid tempo that he maintains throughout his delivery. He starts his delivery with a very small step with his left foot, which is really nothing more than shifting his left foot in order to unweight his right leg. He can then rotate his right foot down onto the rubber. Once he has shifted on the rubber, he brings his left leg up into a high leg kick. He brings his knee up past parallel with the ground and utilizes hip rotation to generate additional energy to unleash in the delivery. As he uncoils his leg kick, he drives his momentum to the plate. The higher leg kick and taller frame enables him to more easily generate additional energy as he drives towards the plate.

In the photos below, you can see that he is in textbook position. He has a good stride length and position, as his stride isn't closed and doesn't force him to throw across his body. His balance is strong, due in part to his good tempo and body control. He is getting a good push off the rubber to drive his momentum to the plate. His plant foot has landed and his pitching arm is up in throwing position, which is indicative of a throwing motion that keeps the upper and lower body in sync. His pitching hand is in good position, as he is "showing" the ball to second base. The shoulders are level, he's not a pitcher who uses forced scap loading to increase his velocity, and the pitching elbow is in good position relative to the shoulders. 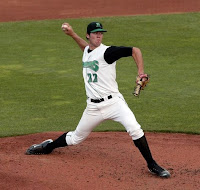 In the photo below, he is just a bit further along in his delivery. He has just pushed off the rubber with his right leg and is driving his momentum towards the plate. His upper body is effectively out over his lower body. You can also see his arm slot, which is a high three-quarter delivery that is free-and-easy.

Once he releases the ball, Ravin's follow-through is very well controlled. He finishes up in perfect fielding position and maintains good body control throughout his delivery. One of the more impressive aspects of his delivery is the ability to generate plus velocity without losing any control of his body. He's got a very smooth delivery and an easy arm action, so he's definitely not a max effort pitcher. He doesn't have to put so much effort into his delivery to generate velocity that he loses control of his body and loses his balance. He maintains his tempo and balance throughout the delivery, which should, at least in theory, help with consistency and reduce his injury risk.

Overall, Ravin remains one of my favorite pitchers to watch simply throw the ball. His tempo and balance are very strong and his arm action is smooth. I think he is very solid mechanically, which should enable to be more effective than he has been thus far in his career. Hopefully, he'll start maximizing the benefits to be reaped from his potentially plus stuff and pitching mechanics. To do so, he might need to improve his mental approach on the mound. He needs to be able to grind through innings where he doesn't have his best stuff or command. He is the type of pitcher who is susceptible to the big inning, so he needs to learn how to not let the inning get away from him. Learning to overcome adversity to be successful is a pivotal part of player development and an area where Ravin needs to improve.

I'd recommend taking a look at his MLB draft scouting video, which you can access here.


Conclusion
Ravin remains a personal favorite of mine. He's got the combination of pure stuff, clean mechanics, and physical build that should enable him to be an effective pitcher in the professional ranks. And, the fact that he has struggled as much as he has in the professional ranks is a bit surprising to me. In 2009, he was in the process of taking the step forward that I have been waiting to see, but unfortunately injury in the second half derailed his season and limited his workload. So, it turned out to be more of a half-step, but still an encouraging sign for his continued development.

While Ravin's performance to date has been underwhelming, his raw abilities are strong enough to enable him to make a significant breakthrough when it all comes together. He's a light-switch type player, but it's time for him to flip the switch and emerge from the shadows to reclaim his prospect status.

It seems like he's been around forever, but he'll still only be 22 years old during the 2010 season. His breakthrough in 2009 and his natural abilities continue to give me a good deal of hope for the future. So, for now, he checks in at #25 on the list, but he'll need to have a strong showing in 2010 to avoid falling off the list entirely.
Posted by Lark11 at 9:32 PM