J.C. Sulbaran arrived in the Reds organization with substantial hype, surpassed only by Aroldis Chapman in recent years. Like Chapman, Sulbaran generated the buzz with his performance in international competition. However, Sulbaran learned quickly that success at the international level doesn't always translate easily into success at the professional level.

The Reds selected Sulbaran in the 30th round of the 2008 draft with the 899th overall pick. Sulbaran is from Curacao, but attended American Heritage high school in Plantation, Florida where he was a teammate of more highly regarded prospects in Eric Hosmer and Adrian Nieto.

Sulbaran really made his mark in international competition, where he pitched for the Dutch team. He held the Cuban team to 1 run in 6 innings at the Haarlem Honkbal tournament. He squared off against the Cubans once again in the Olympics, where was less impressive, giving up 2 earned runs in four and two-thirds of an inning. He was also selected to pitch for the Dutch during the 2009 World Baseball Classic, where he gave up 5 hits and 3 runs in two and two-thirds innings, including a dominating 3-pitch strikeout of Ivan "Pudge" Rodriguez.

His international experience earned him a great deal of hype and a spot in the rotation for the Dayton Dragons for the 2009 season.

Despite his impressive performance in the World Baseball Classic, the Reds wisely were conservative with him, sending him to low-A Dayton for the season.

For the Dragons, Sulbaran started 21 games, working 92.2 innings and posting a 5.24 ERA, 1.57 WHIP, 100/51 K/BB ratio, and a 0.60 GB/FB ratio. Obviously, despite his unimpressive overall performance, there are still components to like, as evidenced by his 9.71 K/9 ratio and his 1.96 K/BB ratio. Additionally, Sulbaran was a bit unlucky, as evidenced by his .317 BABIP and 69.2% strand rate. So, potentially a few more hitters than expected reached base via balls-in-play and a few more baserunners than expected came around to score.

However, his strong strikeout rate is about the only positive to draw from his 2009 season, which was characterized by a high walk and homerun rates. He was inefficient with his pitches and struggled to keep the "balls-in-play" on the ground.

Taking a look at Sulbaran's pitching mechanics may identify reasons for the primary characteristics of his performance, namely 1) good velocity, 2) poor command, and 3) high flyball rate.

Once he does shift his right foot down onto the rubber, he brings his left leg up into a leg kick. In his leg kick, he brings his knee up well past parallel and uses significant hip rotation, which coils his body to generate energy and results in him almost showing his back to the hitters. His leg kick involves his lower leg wrapping around his body and his left foot actually ending up outside his right hip at the apex of his leg kick. Jamie Moyer uses a similar wrapping type leg kick, one wherein the foot is drawn back farther than the knee (and, yes this is likely the first and only time J.C. Sulbaran will ever be compared to Jamie Moyer, but there are some similarities in their leg kicks).

Once he gets to the apex of his leg kick, Sulbaran begins his move to the plate, which is triggered by breaking down his right leg. He flexes his right knee to begin his drive to the plate. This knee bend seems a bit more pronounced when he works from the stretch, but one of the immediate consequences of this move is that it alters the level of his shoulders. His pitching shoulder drops in relation to his left shoulder, which means that as he begins his drive to the plate he is "throwing up-hill," so to speak. This is likely one reason for his difficulties in keeping the ball down in the zone.

Another reason for his difficulties in keeping the ball out of the air is his upright posture. His upper body remains tall throughout his delivery, which can make it difficult to finish off pitches and work down in the zone effectively. Lengthening his stride would help him finish off his pitches, but as it stands his stride is somewhat short. Aaron Harang has struggled with this in recent years, as his spine angle has become too vertical in his delivery and follow-through. "Throwing up-hill" and standing too up-right are two likely causes for his significant fly ball rate, though power pitchers in general have a tendency to work up in the zone and get a high rate of fly balls. Still, Sulbaran's fly ball rate is pretty extreme, even for a power pitcher.

After driving off the mound, his plant foot lands closer to the thirdbase side than is normal, which leaves him in a closed off position and results in him throwing across his body. This cross-fire throwing motion results in the momentum of his delivery pulling his body off to the first base side on his follow-through. This type of cross-fire throwing motion likely creates arm-side run on his fastball. In addition, Sulbaran seems to be inconsistent with his follow-through, as he falls off to first to a different extent on different pitches. Obviously, falling off to one side of the mound leaves a pitcher in less than ideal fielding position.

In addition, when his plant foot lands his heel at times hits the 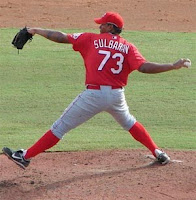 When you combine the inconsistency of his cross-fire delivery with the inconsistency in the landing of his plant foot, it's not surprising that he struggles to maintain a consistent arm slot. Right now, there is just too much inconsistency and looseness in his delivery, which helps explain his struggles with both command and control in 2009.

Here is a look at J.C. Sulbaran in action courtesy of RedsMinorLeagues on YouTube:


While his command and fly ball rate aren't strong, he does generate significant velocity, which helps him wrack up the strikeouts and enables him to dominate hitters.

In terms of efficiency and effectiveness, pitching mechanics can be thought of as a kinetic chain that is only as strong as its weakest link. However, from an injury risk point of view, the arm action itself is the most important factor in pitching mechanics. Good arm action provides a strong foundation around which to build a pitcher. It's easier to alter timing, tempo, balance, lower body drive, etc. etc. etc. than it is to teach a pitcher a new way to throw the ball. Despite some unsual pitching mechanics, Sulbaran does possess good arm action.

Sulbaran's arm action does contain several positives. After he breaks his hands, Sulbaran shows the ball to second base when bringing it up into throwing position. Also, he maintains good elbow position in relation to his shoulder level. Finally, he doesn't overthrow by using so much effort that it strains the pitching arm, throws the rest of his delivery off balance, or causes the various moving parts of his delivery to fall out of sync. Additionally, Sulbaran's good arm action should provide for a reduced injury risk.

Sulbaran has long, loose limbs that allow him to generate easy velocity from his high three-quarter arm slot. He's not a max effort guy, as he has a free-and-easy arm action that gives his pitches good hop and allows his pitches to get on the hitters before they are ready. Sulbaran's height also gives him an advantage, as he both releases the ball closer to the plate and throws on more of a downward plane than shorter pitchers. The ability to generate velocity increases both the ability to dominate and the margin for error on location mistakes.

Sulbaran certainly has to refine his mechanics, but he does has some positives that could enable him to be an impact pitcher in the professional ranks. He has a nice three pitch mix with a fastball that sits 90-92 mph, a developing curveball that enables him to change the eye level of hitters, and an average change-up.

Sulbaran struggled in his first taste of pro-ball and looks to rebound in 2010. He would benefit from tightening up his mechanics, but he has a nice three pitch mix and easy velocity that could enable him to develop into a true impact pitcher. For now, Sulbaran's substantial upside outweighs his 2009 performance and the inconsistency in his mechanics to land him at #12 on the list.
Posted by Lark11 at 10:57 PM