In 2008, Chris Valaika was awarded the Chief Bender Award as the Reds Minor League Player of the Year. He followed it up in 2009 with arguably the most disappointing season of any prospect in the entire system.

Obviously, one bad season could be nothing more than an outlier driven by bad luck and nagging injuries. It's entirely possible that that is the case for Valaika, but the down year certainly did him no favors. Much like Danny Dorn, Valaika's inability to perform at a high level during the 2009 season likely cost him both a late season promotion and a shot at a full-time gig in 2010.

He'll look to rebound in 2010 and reestablish his prospect credentials. If he can do so, then he may play his way back into the organization's immediate plans for the future.

To say that Valaika had a forgettable 2009 season would be an understatement. Seriously. 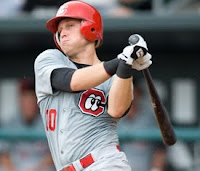 In fact, 2009 was largely a wasted development year for Valaika. At best, it forced him to face adversity, which some organizations like to see, as it forces a prospect to learn to deal with and overcome challenges. So, hopefully, Valaika emerges from 2009 with more mental toughness, which every player needs at the MLB level.

Valaika spent the entire year with triple-A Louisville, where he struggled not only with his performance, but his temper as well. An ill-advised haymaker to a water cooler resulted in a fractured hand, which put him on the shelf for a chunk of the season. Still, given that Danny Dorn also struggled mightily with the promotion to triple-A, maybe there is something in the water in Louisville (another explanation for the water cooler incident?). Or, on a more serious note, maybe the jump to triple-A is a bit more difficult than previously thought. 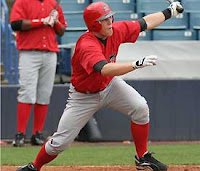 On the season, his line drive remained a stellar 21%, while his BABIP was a somewhat low .282. Unfortunately, his strikeout rate jumped from 17.9% in 2008 to 19.4% in 2009, while his walk rate fell from 6.8% in 2008 to 4.1% in 2009. So, his plate approach seemed to suffer, which could either be a result of his struggles or one of the causes. It's just as easy to imagine him getting less disciplined at the plate as his struggles mounted as it is to imagine his struggles being caused by being overly aggressive and chasing bad pitches. Whatever the explanation, his approach took a noticeable step backward in 2009. Even early-count hitters need to focus on offering at pitches that they can handle, as consistently forcing consequences to At Bats on pitcher's pitches is a quick way to put yourself at a significant disadvantage in the all important pitcher v. hitter confrontation.

On the defensive side, he continues to get extensive work at 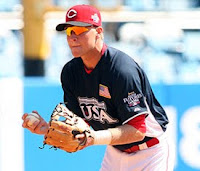 shortstop (77 games), but also spent some time on the right side of second base (18 games). His range at short still leaves something to be desired, as evidenced by his Total Zone Runs/150 rating of -4. At second, his range graded out a bit better, earning an average mark of 0 Runs/150. It was refreshing to finally see the Reds give him a look at second, as the versatility will only help his case. Even so, 2009 marked the first time Valaika had manned 2b at any professional level. Circumstances are working against Valaika, as his game profiles better at second, but the make-up of the 25 man roster would make it easier for Valaika to break in at shortstop.

Valaika is a strong, sturdy ballplayer with a thick, muscular type frame. He's 6-0 tall, but tips the scales at a stout 215, which is a bit bigger than your typical middle infielder. Physically, he strikes me as being somewhat similar to Cleveland's Jhonny Peralta. In fact, his overall game reminds me of Peralta, who is more of an early-count hitter with good pop, limited on base skills, and fringe defensive skills at shortstop that forced him to switch when he outgrew the position. It's questionable whether Valaika will develop as much power as Peralta or has enough defensive skill to hold down shortstop for even a few years. Still, given the similarities of their respective games and body types, a Peralta type career strikes me as a likely ceiling for Chris Valaika. Of course, a lot would have to break right for Valaika to max out on his projection, but he still certainly has nice upside.

At the plate, Valaika uses a wide-spread stance and a high pre-pitch hand position. He keeps his hands in front of his right shoulder and uses a significant bat waggle to stay loose while waiting for the pitch. While waiting for the pitch, he constantly grips and regrips the bat to ensure loose grip pressure and prevent tension in his swing. As the pitch is delivered he pulls his hands back into hitting position. He uses a high back elbow which he has to drop before firing the swing. His wide spread stance gives him a sturdy foundation for his swing. To transfer his weight, he lifts the foot up slightly and puts it right back down. His minimal stride is effective in transferring his weight, but doesn't result in significant cocking of the hips. Cocking the hips is one of the primary ways a hitter can generate power, but it's not the only way. Valaika is strong enough to generate power with both his upper and lower body to offset the less than ideal hip action.

Here is a look at him in action:


And, if you want another look at him, check out this quality Arizona Fall League clip of Valaika at the plate.

As for his approach at the plate, Valaika is an aggressive, early count hitter. He's not the type of hitter who is going to see a lot of pitches or grind out At Bats to draw walks. He's a grip-it-and-rip-it type, who is going to pick a pitch and not get cheated on it. He has strong hands and wrists, which when coupled with his good hand-eye coordination enables him to make hard, consistent contact. He also can drive the ball with power to all fields. His swing, which is simple and uncomplicated, generally has a slight uppercut path to it, but at times he seems to get a bit top hand heavy in his swing.

Valaika isn't overly fleet of foot. He doesn't get out of the box or down the first base line very quickly, so he's not likely to rack up many infield hits or swipe many bases. In his professional career, he has stolen 13 bases and been caught stealing 13 times. Obviously, he does more harm than good when he attempts larceny, as you have to swipe bases at a greater than ~70% clip to benefit your team. If you fall short of that mark, then you are actually costing your team runs.

The question on Valaika, was, is, and continues to be whether he can handle shortstop, as the Reds are certainly in need of one. The consensus of the scouting community is that his range will be stretched at short and the defensive metrics seem to support that notion.

Under the TotalZone metric, Valaika has only posted a positive Runs/150 number at rookie level Billings in his first taste of pro-ball. All his other range stats at shortstop are significantly in the negative, including a -9 in 2007 for Dayton, a -5 in 2008 for Chattanooga, and a -4 in 2009 for Louisville. 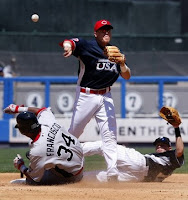 On the plus side, Valaika has a strong, accurate arm, which plays well all across the infield, but he lacks quickness and his range is barely adequate. He profiles better at secondbase, but the Reds already have Brandon Phillips entrenched at the position and have shown little inclination to shift "The Franchise" across the bag to shortstop. So, for now, Valaika's best chance at a starting job with the Reds is at shortstop and he may ultimately be next in line after Orlando Cabrera's one year contract expires.

Personally, I find it to be increasingly difficult to get behind the idea of a "fringe" defensive player at shortstop. The new statistical metrics are revealing defense at shortstop to be just too important to sacrifice for anything less than an elite, impact bat. Unfortunately, Valaika simply doesn't have that kind of bat, so whatever above average offensive production he provides will be dragged down by the runs he gives away on defense.

Ultimately, I suspect that Valaika's terrible 2009 season has done little to diminish the organization's view of him. He will always be an offense-first type player, but he could have just enough defensive skill to carve out a few years of shortstop play at the MLB level. He profiles better at second, where he would likely acquit himself well defensively and his defense wouldn't drag down the value of his bat.

At the plate, Valaika certainly has the potential to be a productive MLB hitter. I like his underlying hitting skills much better than his approach at the plate, but he has certainly made it work for him thus far.

The Reds have made serious strides in improving the farm system over the past few years, but the organization still lacks much quality prospect depth in the middle infield. Chris Valaika is one of the organization's few bright lights in the middle of the infield, which for now lands him at #14 on the list.
Posted by Lark11 at 11:55 PM