After a stellar career at Arizona State University, Mike Leake overcame the irrational scouting bias against short righthanded pitchers to be selected 8th overall in the 2009 draft.

Given his 5-11 stature, Leake probably provides more pitching skill-per-inch than any other prospect in the draft. He is so well-rounded that it is much quicker to talk about what he lacks, than what he does well. Essentially, the only thing Leake lacks is plus velocity. He possesses every other skill that you'd want to see in a pitching prospect and that makes him one of the strongest and most intriguing prospects in the system.

Leake throws everything but the kitchen sink. He works with an 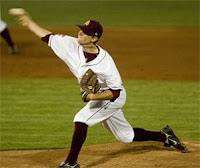 assortment of different pitches: a four-seam fastball, cutter, curveball, slider, and changeup. And, I'm sure that even as you read this he's tinkering with a new pitch or a new grip to create different movement and give him the advantage over professional hitters.

In 2009, Leake joined Stephen Strasburg as the most dominant pitchers at the collegiate level, leading his Arizona State squad to the College World Series in Omaha. In his first College World Series start against the University of Texas, Leake didn't have his best stuff, but he demonstrated the polished approach that defines his game. It was revealed later that Leake was possibly battling some tendinitis in his pitching arm, which could go a long way towards explaining his struggles. Leake tried to mix his pitches and speeds to attack the hitters, but he just couldn't execute. Simply put, he just didn't have his good command. He wasn't able to hit his spots, which is very uncharacteristic of him.

Leake was willing to throw any pitch in any count. In the first inning, he showed a good tailing fastball and a sharping biting curveball. But, his fastball command was spotty. Even so, he managed to get a strike out and wriggled out of trouble by inducing a double play ball.

In the second inning, Leake demonstrated his comfort with his secondary pitches, as he threw a breaking ball in both a 2-1 count and 0-0 count. He seems very comfortable throwing any pitch in any situation, but he still works off of the fastball. Even Jamie Moyer pitches off of the fastball, because it's what you have to do to set up all the other pitches.

After he was drafted, the Reds let Leake rest his arm for the remainder of the season and then sent him to the Arizona Fall League to get his feet wet at the professional level. Pitching for the Peoria Saguaros, Leake posted a stellar 1.37 ERA with a 1-2 record in 6 games. Not a bad way to start off a career, especially in a notoriously hitter friendly environment like the AFL.

Leake's fastball velocity can touch 94, but sits in the 88-92 range. While his velocity is a tick below what is expected in a top of the rotation starter, what's more impressive than a couple extra miles per hour on the fastball is that Leake already understands that he can succeed working at less than max effort. He understands what pitching is all about and knows that success involves more than just lighting up the radar gun. It's about adding and subtracting velocity, changing the eye level of the hitter, and hitting your spots. As the great Warren Spahn said, "hitting is timing and pitching is upsetting that timing." Possessing that knowledge is what separates the "pitchers" from the mere "throwers." Leake's understanding of pitching is very advanced and belies his experience, as he already resembles a savvy major league veteran on the mound. 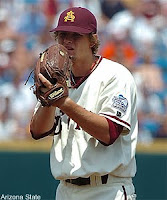 As he stands on the mound and looks in for the sign, Leake holds his hands up at chin level and gets the proper grip on the ball for his pitch of choice. He then starts his windup with a small step towards first base with his glove side ("GS") leg to un-weight his pitching arm side ("PAS") leg, which enables him to rotate his body and shift his PAS foot down onto the rubber. As he takes his initial step towards first base, he also brings his hands all the way down below the belt. Next, he brings his hands up near his right ear and his PAS leg up into his leg kick. His leg kick more than exceeds parallel to the ground and involves hip rotation to coil up and create tension and potential energy. When he reaches the apex of his leg kick, he doesn't point his toe to the ground, but rather keeps his foot tense and maintains a 90-degree angle in relation to his shin. It's a minor issue, but one school of thought espouses the belief that little moves such as this gradually increase fatigue over the course of the game, as they require energy to execute pitch after pitch after pitch.

As he begins to unpack his leg kick, he uncoils and drives to the plate with a good push off the rubber to convert potential energy into kinetic energy. His good leg drive helps him "throw with his body" and reduce stress on his arm. Additionally, his ability to succeed while working at less than max effort should cut down on his injury risk. Leake's pitching style and mechanics are about staying within himself and remaining in control, rather than high velocity and effort. This strategy helps Leake stay in balance throughout his delivery, but also prevents him from generating maximum velocity. It's a trade off, but one that works well for Leake.

Leake's stride is appropriate in length and landing position, which enhances the efficiency of his delivery, as he effectively imparts stored energy directly to the baseball. His plant foot position doesn't close off his body in his delivery or hinder his momentum to the plate. In addition, when his plant foot lands his arm is up in the proper position and not lagging behind, which helps his upper body remains in-sync with his lower body throughout his delivery. Leake's combination of plus athleticism and body control gives him a great balance and tempo throughout his delivery.

As for his throwing motion, Leake works from a three-quarter arm slot with a loose arm action. His free-and-easy motion and ability to work at less than max effort should reduce his injury risk and when paired with his plus command should enable him to work deep into games. When you don't have to expend maximum effort on your pitches and are economical with the pitches that you do throw, then you should be able to throw a lot of innings and work deeper into games than max effort type pitchers. On the downside, the lower arm slot will prevent him from working on a downward plane. Overall, Leake is efficient in both his mechanics and pitches, which makes him a low risk, high floor type of pitching prospect.

Here are a couple of different looks at Leake in action:


In sum, Leake has some of the cleanest pitching mechanics in the entire system. His less than max effort delivery and plus athleticism enable him to maintain his body control and tempo and helps him to consistently repeat his delivery.

Leake possesses an interesting blend of athleticism and polish. He lacks plus velocity, which lowers his ceiling in the eyes of some, but makes up for it with efficiency and guile. While some of the riskier pitching prospects that were available in the draft were thought to have higher upside, Leake's polish and pitching IQ work to raise his ceiling.

Overall, Leake should be one of the fastest movers in the 2009 draft. His lower level of risk and substantial ceiling are sufficient to land him at #3 on the list.
Posted by Lark11 at 10:27 PM