After hitting over .300 with good power at three different minor league stops over his first two professional seasons, Neftali Soto experienced his first struggles as as professional in 2009. His struggles were not inconsiderable.

The Reds drafted Neftali Soto with the 109th overall pick in the 3rd round of the 2007 draft. Soto was selected out of Colegio Marista in Puerto Rico where he is the all-time youth homerun champ in Puerto Rico, earning the distinction by breaking former MLB slugger Juan Gonzalez's all-time homerun mark.

So, despite the decline in production, there is still a potential positive or two to be drawn from his performance. While the heightened strikeout rate isn't ideal, it is encouraging to see Soto work his way into more late counts. If in fact it's intentional. To a certain extent, both walks and strikeouts are a necessary byproduct of hitting late in the count. After all, you can't strikeout without seeing at least 3 pitches and can't draw a walk without seeing at least 4 pitches.

Statistical analysis long ago revealed the importance of drawing walks and getting on base, but an increased walk rate is not the sole benefit to be derived from hitting in late count situations. As a general rule, both hitters and pitchers perform substantial better when they are ahead in the count. The pitcher v. hitter confrontation is the defining aspect of the sport. That confrontation is, in essence, a battle between the pitcher and hitter to tilt the probability of success in their direction. If the hitter can work the count to 2-0 or 3-1, then his chances of a earning a positive outcome to the At Bat increase substantially. On the flip side, if a pitcher can work the count to 0-2 or 1-2, then his chances of achieving a positive outcome increase substantially.

A hitter utilizing a disciplined, selective approach at the plate will not only draw more walks, but also generally improve the odds that he will get a hit. Ted Williams once said that getting a good pitch to hit is the most important part of hitting. By seeing more pitches, grinding away At Bats, and tilting the count in your favor the hitter improves his chances for success. Of course, the reason more hitters don't use a disciplined approach is that it isn't easy. Constantly being selective, making the "go" or "no go" decision on pitch after pitch after pitch can lead to mental fatigue. Still, the benefits of the disciplined approach are undeniable, so hopefully Soto is learning how to be a bit more disciplined and selective at the plate.

After his lackluster 2009 season, Soto opted to head to the Puerto Rican Winter League for what turned out to be a very brief stint. He played in a single game going 2-for-3 and scoring a run. Unfortunately, that was the extent of his playing time, which wasn't enough to offset a disappointing performance in Sarasota.

Soto is also one of those rare players that can actually make a right-handed swing look good. He maintains good balance and tempo throughout his swing. He generates easy power and gets good extension out through the ball.

Soto's pre-pitch setup involves a slightly wider than shoulder width stance and a high back elbow. When the pitch is delivered, Soto takes a very small stride towards the pitcher to transfer his weight. After he strides, he fires his hips, which creates substantial rotational energy. That strong hip action drives the swing and creates good bat speed. As he clears his hips out of the way, he brings his long, fluid swing to bear on the ball. His swing has a slight uppercut to it, which imparts good backspin on the ball and helps increase the carry on balls in the air. When a swing generates substantial power, the rotational energy frequently pulls a hitter off-balance, but Soto maintains his balance effectively throughout the swing.

Despite the aggressive and somewhat longer swing, Soto's plus hand-eye coordination allows him to make consistent, hard contact. He seems to maintain good control of the barrel of the bat throughout the hitting zone. He simply doesn't have the same type of problem making contact that typically plagues power hitters, which makes him a more complete hitter and a more compelling prospect. Soto reminds me a bit of Dustin Pedroia in that respect, as he takes a massive hack at the pitch, but consistently gets the barrel of the bat on the ball. Such a long, aggressive swing isn't supposed to produce such consistent contact, but plus hand-eye coordination makes it possible.

Unfortunately, even if Soto is working to become more disciplined, he still battles selectivity problems, as he remains prone to chasing pitches outside the zone. More advanced pitchers took advantage of Soto's free swinging ways by repeatedly enticing him to chase pitches out of the zone, most notably those breaking down and away. In 2009, his struggles were driven more by his flawed plate approach than his swing mechanics. You simply can't make effective use of your swing when you are using it on poor pitches. He needs to continue to work on pitch recognition and then only offer at those pitches he can actually handle. Until he learns to effectively recognize good breaking balls and refine his approach to focus on hitting those pitches in his hot zones, he will continue to struggle.

Below you can see a few photos of Soto at the plate. 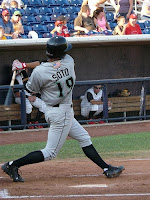 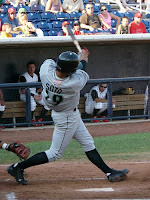 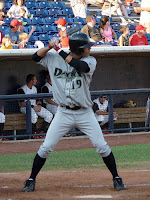 In the photo on the left, you can see Soto's strong set-up, which gives him a solid foundation for his swing. In the middle photo, you can see Soto's head staying down on the ball and the good extension, as he gets out-and-through the ball. Also, you can see that the rotational energy created by his swing and the impressive bat speed at times cause him to spin out or roll over on his front foot just a bit. In the photo on the right, Soto maintains good balance throughout his swing and he keeps both hands on the bat in his follow through. Again, it's more personal preference than anything, but I've always favored hitters who keep both hands on the bat in the follow through. Keeping both hands on the bat ensures stability throughout the swing and prevents power from bleeding from the swing. Of course, some argue that by taking the top hand off the bat you improve power by increasing extension, but if the top hand comes off too early in the swing, then you risk losing power.

Below, you can see a video clip of Soto in action. Here, he hits a bomb in impressive style for the Dayton Dragons.


And, here is a clip of Soto as an amateur in a homerun contest. You can see his impressive swing and raw power. In addition, there are some very interesting slow motion shots of his swing from different angles at the tail end of the clip, so it's definitely worth your time.


Soto has very impressive swing for a prospect his age and he will go as far as it takes him. Hopefully, he can demonstrate a bit more patience and an improved ability to control the strike zone, as more advanced competition may be able to take advantage of his aggressive approach. While his hitting skills are both advanced and polished, his defensive skills are not.

POSITIONAL VALUE AND THE TOOLS OF IGNORANCE

His substandard performance in 2009 has opened the door to talk of him switching behind the plate. I remain confident in his bat and dubious about an attempt to move him behind the plate. Soto's career was always going to be determined by his bat. His defensive skills and positional value were always going to relegate him to being an offense-first type prospect, so attempting to shift him to the most challenging defensive position on the field seems somewhat dubious. If it works, then his value obviously gets a boost, but there is a significant risk of completely stalling his offensive development. Even so, when I think of prospects who have successfully made the transition to catcher, I think of very good athletes who have strong footwork. Examples that leap to mind are Buster Posey, Brandon Inge, and Russell Martin. I'm just not sure Soto fits that particular profile.

When I first saw Soto on defense, what jumped out at me was his clear lack of quickness, as he was rather plodding. His overall foot speed and agility simply weren't impressive. It was clear that he wouldn't be able to stick at shortstop, but now it seems questionable whether he can even stick at third base. If he can't, then he'll be relegated to leftfield or first base, where he'll have substantial competition within the organization. Outside of that, he'll be left to strap on the "tools of ignorance." The early reports about his catching are positive, but it's a very difficult position to master. I'm just not sure Soto has the agility and quick lateral movement necessary to be an effective catcher. Catching requires strong footwork and I'm just not sure Soto has the footwork to make the transition.

Soto is at a crossroads in his career in more ways than one. He had his first brush with adversity, which could help his development or derail it entirely. He is also facing a potential position switch, which would completely redefine his prospect profile. At this point, it's difficult to know exactly what to make of Soto, but he still has the swing mechanics and power potential that made him one of the more intriguing prospects in the system.

In 2010, the Reds will no longer play in Sarasota, so regardless of where Soto starts he'll be in a better park for hitters. Additionally, he'll have an offseason to contemplate his struggles and learn from his mistakes. The 2010 season will be a big one for Soto, as he could emerge stronger as a result of the adversity or his prospect status could be derailed entirely. For now, his hitting skills are enough to land him at #9 on the list, but he has enough upside to climb back up the list with a strong showing.
Posted by Lark11 at 9:53 PM