Zack Cozart is the best shortstop prospect in a system that is becoming flush with quality shortstop prospects. Cozart has long fit the profile of a defense-first shortstop, but he is really beginning to develop his offensive game to the point where he could become an asset at the plate as well. Cozart is a heady player with a good baseball IQ and good instincts between the lines, both of which help his tools play up a notch and allows him to get the most out of his abilities. Jim Bowden loved toolsy athletes, but the current front office is also interested in pure baseball players. Cozart falls into the latter category.

Cozart continued his gradual ascent up the prospect ranks. By and large, the Reds have taken a conservative approach with Cozart, advancing him one level at a time. The only slightly aggressive aspect of his development was the decision to bypass high-A ball and send him to double-A Carolina for the entire 2009 season. After spending back to back seasons in low-A Dayton, he made the big jump up all the way up to double-A and more than held his own. Still, it is somewhat surprising to see Cozart perform so capably after skipping high-A ball.

In 131 games and 541 plate appearances, Cozart posted a slash line of .262/.360/.398/.758 with 10 homeruns, 10 stolen bases in 12 attempts, and a very strong 87/63 K/BB ratio. His control of the strike zone was impressive and represented a significant improvement over his early professional performance. In 2007, he posted a 3.3 K/BB ratio, in 2008 he posted a similar 3.2 mark, but in 2009 he improved it substantially to a mark of 1.4 . Part of the reason for the improvement could be LASIK eye surgery, which Cozart had prior to the 2009 season. Obviously, the better you can see the ball, the better choices you can make on whether to swing or take the pitch. His better control of the strike zone may also have improved the quality of his contact, as his line drive rate jumped up to a stellar 20%. The more disciplined the hitter, the more he tilts the probability of success in his favor. By grinding away at bats, Cozart not only improved his walk rate, but also put himself in more hitter's counts, which allowed him to see better pitches to hit, enabling him to drive the ball with authority with greater frequency. In addition, his production was not aided by hit luck, as evidenced by a very reasonable .307 BABIP.

On the other hand, Cozart did have a fairly substantial platoon split, fairing much better against lefthanders. He posted a very strong .316/.426/.436 line against southpaws, but only a .243/.336/.384 mark against righties. Obviously, that's less than ideal, as he's stronger on the shorter side of the platoon. There are quite simply far fewer lefties than righties in the pitching ranks, so his production will be driven largely by how he fares against righties.

Cozart is likely to always be a defense first type player, but he answered a lot of lingering questions about his bat by performing well against a very advanced level of pitching. He's unlikely to ever be an impact bat at the MLB level, but his performance revealed that he may ultimately be something more than an offensive liability.

At the plate, Cozart has a solid, fundamentally sound swing. During his pre-pitch setup, Cozart uses a wide spread, open stance. He stands very upright at the plate and holds his hands up high by his right ear, which is even up above the level of his shoulders. He uses a small bat waggle to stay loose while waiting on the pitch. When the pitcher comes to the plate, Cozart uses a high leg kick type stride with his front foot to transfer his weight to meet the pitch. The stride also operates to close up his stance and square up to the plate.

The stride is also typically used to cock the hips to build up potential energy to unleash during the swing. Cozart's swing has evolved to incorporate his lower body more effectively, which gives him solid average power. His swing path is short and quick to the ball, and while his swing is compact, Cozart still gets good extension and plate coverage. Despite his wide spread pre-pitch stance, Cozart can still get out too much on the front foot at times, which can leave him in a rather upright swing position. When that happens, he loses lower body drive and is left with largely an arm swing. When he stays back on the ball, he can stay down and through the swing more effectively, which enables him to drive the ball more authoritatively. Previously, he was largely a pull-hitter, but he has worked to become a more complete hitter who effectively utilizes the entire field. This makes him less susceptible to pitches on the outer half and makes him a more difficult hitter for pitchers to pick apart.

Here are a couple of video clips of Cozart in action:

Overall, Cozart has made some tangible improvement in both his approach and swing mechanics. He had to rework the "metal bat swing" he used at the University of Mississippi and learn how to adjust to professional pitching. Now, he has both a better approach at the plate and a more effective swing, which has made him a much more difficult out at the plate. These improvements took hold in 2009, making him a more complete player and an even more intriguing prospect.

In 2009, Cozart was rated as the best defensive infielder in the system by Baseball America. While he lost that informal title for 2010 to Miguel Rojas, he still has the truly impressive defensive skills that will always be his calling card as a baseball player. 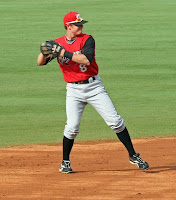 Cozart has soft hands and good fielding actions. He has good first step quickness and plus range, which enables him to chew up the ground in the field. When he does get his hands on the ball, he utilizes a lower arm slot than is typical for a shortstop. Most shortstops tend to come over the top on their throws, but Cozart is more three-quarters with his arm slot. Overall, his arm strength is average at best, but he uses a quick release to help offset the weaker arm. Unfortunately, because of his arm strength, Cozart can struggle on longer relays throws from the outfield and on deep groundballs in the hole.

Overall, Cozart continues to pile up gaudy defensive production season after season. He has the type of defensive skills at a premier defensive position that could make him a true impact player on defense, which is rather rare. If he continues to develop, he could join Drew Stubbs to give the Reds two impact defensive players at premier defensive positions, which could have a tremendous impact on the teams run prevention. Defense still seems somewhat under appreciated, but having an elite team defense tilts the field of play in your favor on every play and lifts the baseline performance of every single pitcher on the staff. Stubbs and Cozart could have a massive impact on the fortunes of the organization in the near future.

Cozart was already an intriguing prospect, but the improvements he made on the offensive side of the game have raised his ceiling and made him a more complete prospect. It remains to be seen whether the improvements he showed in controlling the strikezone were sustainable or not. At times, significant improvements in walk rate or strikeout rate over the course of a single season are not sustainable or even reflective of true improvements in a hitter's approach at the plate. It'll be interesting to see if he can sustain his improved plate approach, as doing so would only make him a more valuable prospect and one with a bit more margin for error at the MLB level.

Cozart continues to make consistent, incremental improvement in his game, which is what you like to see out of a prospect. When coupled with his plus defensive abilities, Cozart's improvements at the plate are enough to land him at #8 on the list. And, if he continues to hit like he did in 2009, then he could be the answer to the revolving door at shortstop that has plagued the organization since Barry Larkin retired. In an organization with a long history of top flight shortstop play, it would be refreshing to once again have an impact talent holding down the position.
Posted by Lark11 at 9:09 PM