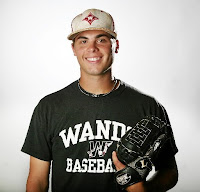 Under Major League Baseball's financial structure, few teams can afford to build their roster primarily through free agency. As a result, drafting and developing your own players is the only realistic way for the small- and mid-market teams to compete. To build from within, a franchise must be successful on draft day. Due to the inherent risk in prospects and player development, all teams are going to have a fairly high fail rate in their draft class.

However, there are two main ways to improve your success rate in the draft:

1) churn talent to gain extra compensatory draft picks when your players leave via free agency, or

2) target those players who slide in the draft due to signability concerns and be willing to pay over slot to sign them.

The original intention (though long since perverted) of option 1 was to compensate smaller revenue teams when their stars players left for greener ($$$$) pastures. The second option has primarily been utilized by the larger revenue organizations to gain a competitive advantage in the form of a more well stocked farm system. However, in the 2010 draft the Reds stole a page out of the over-slot playbook to improve the quality and depth of their farm system.

All of which brings us to Drew Cisco.

The Reds selected Cisco with the 187th overall pick in the 6th round of the 2010 draft out of Wando High School in South Carolina.

During his high school career, Cisco was the staff ace in all four years and earned All-Lowcountry honors four times. As a senior, Cisco tossed 77 innings and posted a 10-2 W/L record, a 0.91 ERA, a 100/13 K/BB ratio, and 56 hits allowed in 77 innings pitched. Cisco also performed admirably at the World Wood Bat Association Championship.

His high school coach, Jeff Blankenship, had the following to say about Cisco:

"He's one of the most focused players we've coached, on the mound and at the plate," Blankenship said. "He bats third in our lineup, which is a very important spot in the order. He's walked 12 times in 44 plate appearances. That's a sign of his patience, his poise. It's something he was born with. When he's out there on the mound, there are no distractions. He's that focused. Sometimes, when he walks off the field, you want to shake him to get him out of that mode so you can talk about the finer points of pitching."

It's not surprising that Cisco has polish and poise beyond his years, as it's in the blood. Whether it's nature or nurture, there is no doubting the positive impact on Drew of his baseball playing family. Drew's grandfather, Galen Cisco, played in the majors for parts of 7-seasons and served as an MLB pitching coach, his father, Jeff, played minor league baseball, and his brother, Mike, is now pitching in the Phillies organization.

By the time the draft rolled around, Cisco was rated as the 74th best prospect by Baseball America. He had a commitment to the University of Georgia, but the Reds bought him out of it with a substantially over-slot bonus of $975,000. Obviously, it took a decent chunk of money to get it done, but Cisco was a very good value in round 6.

Cisco is listed at 6'2", but may be an inch or two shorter. It's not at all unusual for righthanded pitchers to "shrink" an inch or two immediately upon being drafted, as the stigma of the "short righthander" can negatively impact draft status. Unfortunately, his height limits his physical projection, so he may be close to what he will always be. However, he only tips the scales at 195 lbs, so he has some room to fill out and add muscle.

On the mound, Cisco possesses clean and efficient mechanics. He begins his windup with his hands under his chin as he looks in for the sign. He then steps back towards first base with his glove side ("GS") leg, which un-weights his pitching arm side ("PAS") leg allowing him to rotate his foot down onto the rubber. Once repositioned on the rubber, Cisco begins his leg kick to build up energy. His leg kicks reaches its apex when his knee reaches the letters on his jersey. He also incorporates a bit of coil, as he somewhat wraps his leg around his body to create additional torque (see photo). Up until the apex of his leg kick, Cisco's hand position remains largely unchanged, as he holds them in a consistent position just below the chin. At apex, Cisco maintains good balance over his plant leg and gathers his momentum for the drive to the plate.

Once Cisco reaches the apex of his leg kick, he is done building up energy and is ready to impart it on the baseball. To do so, he unpacks his delivery and drives to the plate. He begins by breaking his hands and starting his arm swing. Upon breaking his hands, he drops his pitching hand down by and past his right hip, swinging it slightly towards first base and then up into throwing position to complete the half-circle.

Cisco gets a solid push of the mound, but doesn't generate great leg drive towards the plate. He also utilizes a shorter stride than is to be expected, which is common in polished pitchers who are somewhat short on stuff. Tim Lincecum and Aroldis Chapman practically jump off the rubber in their strides to the plate, while Sam LeCure and Drew Cisco use much shorter strides. Lincecum and Chapman are power pitchers, while LeCure and Cisco profile more as finesse/polish pitchers. 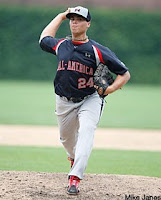 As a result of Cisco's leg drive and shorter stride, some of the potential energy generated by the windup is not imparted on the ball. In addition, Cisco's plant foot lands a bit more towards the third base side than is ideal (see photo). Due to this slightly closed off body position, he throws across his body to a small degree.

The tempo and timing of his delivery are strong, in part because of his good body control. Cisco maintains a smooth, fluid, balanced motion and effectively keeps all the moving parts in-sync throughout the delivery. His arm is consistently in proper throwing position when his stride foot lands and his elbow maintains good position relative to the shoulder. Overall, Cisco utilizes a clean, free-and-easy arm action.

As he comes to the plate, Cisco stands up fairly tall in his delivery, which is due in part to a shorter stride. As a shorter pitcher, standing up tall may help him work on a downward plane, but could also operate to limit the power he can generate.

In addition to his height, Cisco's arm slot may also limit his ability to work on a downward plane, as he throws with a three-quarter arm slot, rather than a pure over the top arm slot. When coupled with his closed off throwing position, his arm slot ensures that Cisco's will fall off to the first base side in his delivery. His three-quarter arm slot and his throwing position require him to slightly throw across his body, which forces his momentum to work around his body towards first base, rather than directly towards home plate. His closed off body position, though far from extreme, operates to slightly block his momentum to the plate. As a result, he finishes falling towards the first base side and in less than ideal fielding position.

Ultimately, Cisco's mechanics are notable more for their efficiency and balance, than the power they generate. However, the efficiency and balance are undoubtedly part of the reason for his plus command, as he has simple, repeatable mechanics. Additionally, his arm slot and ability to succeed at less than maximum effort should reduce his injury risk. It's possible that he could add velocity if he tweaked his mechanics, but that could conceivably bring about inconsistency and heightened injury risk that would likely negate any gains.

Cisco primarily features a four-pitch mix. He uses a four-seam fastball that sits in the 88-92 range, a two-seam fastball that sits 87-89 mph with good movement, a big curveball that clocks in between 76-78, and a sinking change-up. All of his pitches grade out as at least average, while the curveball may already be above average. His curveball isn't a true 12-to-6 type due largely to his three-quarter arm slot, but he does spin it well and it has good bite. The change-up has arm-side run to it and good potential, but he has had little need for it in the high school ranks, where he breezed through games relying primarily on his fastball and curveball. In another sign of his good feel for pitching, he is comfortable throwing all his pitches in just about any situation.

Cisco's fastball velocity isn't plus, but he effectively commands both the two and four seamer to both sides of the plate. As for the two-seamer, he can make it cut or sink, which (at least against less advanced competition) helps offset the lower velocity level and can induce ground balls. Additionally, the fact that Major League Baseball is moving away from the age of steroid infused gorilla ball should only help those whose game is not defined by power. Given Cisco's build, there isn't significant physical projection left to his game, but his velocity might improve a tick or two as he continues to mature physically and settles into the throwing regimen of professional baseball.

While Cisco lacks overpowering stuff or a true knockout pitch, he has very good command and a very strong feel for pitching, both of which enable his offerings to play up a tick. In fact, Cisco was widely considered to have the best command of any high school pitcher in the draft. Simply put, he's a very polished pitcher, which is rather rare for a high school pitcher.

Cisco has yet to throw a pitch in anger as a professional, but the future is bright. As of now, like Tucker Barnhart, he is something of a high floor, lower ceiling type player. However, if he can find an additional tick or two of velocity or polish his secondary offerings, then he could effectively push his own ceiling up. He already has a great feel for pitching and great command, so he should be able to wring every last ounce of production out of his abilities. The question is whether a professional throwing program, strength and conditioning work, and the Reds player development staff can help Cisco improve his stuff. If so, then the Reds could have a special talent. If not, then Cisco could still emerge as a solid starting pitcher.

For now, Cisco has enough polish and feel to check in at #19 on the list, but I love pitchers with high baseball IQs and could see him having enough success to ascend quickly up on the list.
Posted by Lark11 at 5:04 PM