Unfortunately, this will mark Danny Dorn's fourth time on this list, which, like the minor league career homerun mark, is an achievement that no player is going to want. Regardless, I still think Dorn is deserving of a spot on the list and an opportunity at the Major League level.

Dorn has long since established his player profile. Both his positives (pure hitter) and negatives (lack of athleticism, lack of positional value, struggles against southpaws) are well known. At this point in his development, there's very little projection left to his game, so what you see is what you get. And, so far, what the Reds and other MLB organizations have seen hasn't been enough to propel Dorn to the Majors. The Reds have yet to deem him worthy of a MLB roster spot and he has been passed over in two consecutive Rule 5 drafts. So, it's not just the Reds who aren't sold on Dorn as an MLB player.

Forty-man roster spots are very difficult to come by and it remains to be seen whether Dorn will ever reach the majors in any appreciable capacity. Last year's write-up discussed how timing and inertia were actively working against his quest to reach the majors. To get to "The Show", he'll have to continue to prove that his offensive contributions are sufficient for a bottom of the defensive spectrum type player. If Dorn played an up-the-middle position, then he'd undoubtedly be a top prospect. The reality is that he's relegated to a corner spot, a fact which acts as a significant drag on his overall value.

After a disappointing 2009 season in which he struggled in his first taste of triple-A competition, Dorn bounced back very well in 2010. In his second time around the International League, Dorn made the necessary adjustments and posted a stellar .302/.398/.545/.944 slash line in 319 Plate Appearances for the Louisville Bats. He cranked 24 doubles, 2 triples, and 13 home runs to go along with an 81/38 K/BB ratio. On the season, he hit line drives at an eye-popping 29% clip. Dorn made a clear statement in 2010 that he has the tools to succeed against triple-A competition.

On the defensive side, Dorn split time between first base (30 games), leftfield (10 games), and rightfield (23 games). It could have happened out of necessity, but it was also likely an effort to increase his value through increased flexibility on defense. The more things he can do for the team, the more likely he'll win a spot on the bench at the MLB level.

Over the course of his minor league career, Dorn has been 10 runs above average in 225 games in leftfield under the Total Zone Fielding Runs Above Average (Rtz) metric. While there remains a degree of imprecision in fielding metrics, it seems likely that Dorn will at the very least avoid being a significant defensive liability and could ultimately be around league average. He may never be an asset with the glove, but he should be able to avoid offsetting his offensive production with shoddy glove work.

Dorn stands tall with a slightly wider than shoulder width stance. He has a very quiet pre-pitch approach and waits calmly for the pitch with slow bat waggle and a high back elbow. In fact, his whole hitting approach is calm, which gives the impression that he is very comfortable waiting for the pitch to come to him. When the pitcher is ready to deliver the ball, Dorn takes a small stride, but one that effectively cocks his hips to create potential rotational energy. His front hip rotates inward to allow him to load up for the swing.

When Dorn does fire his swing, his lower and upper body work well together and remain in sync. In addition, the tempo of his swing is very smooth. When a hitter has both good balance and the upper and lower body work in tandem, then the overall swing is likely to be both effective and fundamentally sound. Dorn's swing really doesn't contain any wasted motion, as it's the baseball embodiment of "economy of movement."

In the photos below, you can see Dorn's position as the bat first enters and then leaves what Mike Schmidt called the "hitting box". From this sequence, you can see that he 1) keeps his head down and on the ball, 2) utilizes strong hip rotation, 3) maintains a strong hitting foundation and lower body position, and 4) maintains good balance in the swing.

Having a short and compact swing makes Dorn very quick to the ball. As a result, he has no problem handling even the best fastballs. In addition, his short path to the ball enables him to let the ball travel deeper and take a split second longer to read the pitch, which allows him to effectively control the strikezone. He can effectively turn on inside pitches, but he has also become adept at taking the pitch to the opposite field. 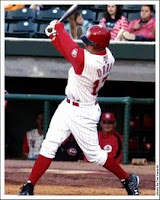 As for the follow-through, I like that he typically keeps both hands on the bat. By and large, what you do after the bat passes through the hitting zone makes little difference, unless of course your top hand comes off so quickly that it prematurely decelerates the bat. Even so, I do prefer a two-handed follow-through, as it ensures that the swing will remain compact and controlled throughout.

Here's a look at Dorn taking batting practice (starting at the 24 second mark) courtesy of CNATI.com. He's clearly just getting loose, but he still puts a couple of pretty nice swings on the ball.

At times, I must admit to wondering what distinguishes Juan Francisco and Danny Dorn in terms of prospect value. The similarities are obvious, as both are lefthanded hitting, offense-first type players who are somewhat questionable with the glove. Additionally, neither provides any positional value or poses much of a threat on the bases. To generate value they rely heavily on their respective "hit tools". To that end, Dorn has a career minor league line of .293/.379/.515/.894, while Francisco sits at .282/.313/.494/.807.

In light of the fact that every component of the slash line tips in Dorn's favor, why has Francisco zipped up the ladder, while Dorn has stalled out in triple-A? It's a question that I ponder each and every year when I do these write-ups.

And, as much as I'd love to leave that as a rhetorical question, I suppose I should answer it by at least pointing out the more obvious reasons.

First, Francisco is roughly three years younger, so he deservedly gets a significant boost for "age vs. level". Second, Francisco has a plus tool (namely power), while Dorn does not. Plus tools are easier to dream on and as a result move the needle much more than a well-rounded game lacking a plus tool. However, I don't think it's debatable that Dorn is the more well-rounded hitter (Batting Average, On Base Skill, and Power) and I'd argue that whatever Dorn gives away to Francisco in power projection he earns back with substantially better on-base ability. I do wonder how much Dorn's power production would benefit from an offseason focused on adding more muscle mass, but maybe those days of significant improvement ended with the steroid era. Third, I suppose I need to include the notion that Francisco can actually play third base, as the organization is clinging to that idea like grim death. Just like anyone with a pulse, Francisco can nominally "play" third base in the sense that the manager can write the number "5" next to his name on the lineup card, but in the truer sense of the word it's clear that Francisco cannot "play" third. 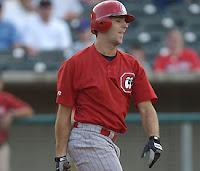 So, how much more valuable is Juan Francisco than Danny Dorn?

In the end, Francisco's age is his main advantage and, at this point, it's not an insignificant one. In fact, an almost 3 year age difference is nearly a lifetime in prospect development and is the main reason why I have typically ranked Francisco higher than Dorn. Dorn is on the verge of being too old to be a legitimate prospect, as each additional minor league AB he collects moves him closer to the dreaded "organizational player" label.

So, Francisco certainly has time on his side, which gives him additional development time to figure things out, but that advantage doesn't seem sufficient to explain the disparate treatment of Francisco and Dorn, who still seem to be more similar than they are different. That probably speaks more to the Reds overvaluing Francisco than undervaluing Dorn, but both could probably contribute if utilized properly. Dorn may not ever be an impact player or even a full-time starter, but that doesn't mean that he's without value. He's a polished, well-rounded hitter who should be a serviceable defensive player at a position at the bottom of the defensive spectrum.

Unfortunately, Dorn's 2009 struggles are likely to haunt him forever, as they may have derailed his chances at an MLB career. In 2008, he ripped double-A pitching to the tune of .277/.367/.539. If, in 2009, he had performed at triple-A like he did in either 2008 or 2010, then he would likely have received a Major League call-up. At that point, he was really starting to build up his reputation as a legitimate prospect, so his slide backwards in 2009 was a significant setback. He got right back in track in 2010, but it may simply be too little, too late.

At this point, Dorn's best hope is to have a white-hot spring training and earn the lefthanded half of a leftfield platoon with Jonny Gomes. It's clear that Gomes was exposed in full-time duty last year, so pairing him with a lefty is a logical strategy, especially since Gomes gives back a substantial portion of his offensive production with shoddy glove work. And, with Laynce Nix taking his game on down the road, it's possible that Dorn could emerge as a legitimate option for that role. It may be a long-shot, but it could represent Dorn's last, best hope for carving out an MLB career of any significance.

For now, Dorn's hitting ability and his strong 2010 season keep him anchored at #17 on the list, but age is rapidly gaining on him. I still think, if utilized properly, he could do some damage at the MLB level, but it needs to happen sooner rather than later.
Posted by Lark11 at 10:21 PM