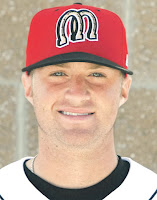 After years of inconsequence behind the dish, the Reds are suddenly flush with good catching prospects. Tucker Barnhart is clearly the third best in the system, but that says as much about those ahead of him as it does about his abilities. And, while Barnhart may rate third in the pecking order in total value terms, he's hands down the best defensive catcher of the bunch.

The Reds landed Barnhart with the 299th overall pick in the 10th round of the 2009 draft. He attended Brownsburg High School in Indiana where he earned Louisville Slugger All-America honors and was named the 2009 Mr. Baseball in Indiana.

As a high school sophomore, Barnhart his .417 with 9 doubles, 10 homers, and 39 RBI. As a junior, Barnhart earned a reputation by hitting .500 with 11 homeruns, 10 doubles, and 39 RBI. As a senior, his newly acquired reputation earned him much more respect from pitchers, who worked him carefully when they bothered pitching to him at all. He hit .369 with 8 doubles, 6 homers, and 25 RBI. Barnhart handled getting fewer pitches to hit rather well and demonstrated a maturity beyond his years:

“In my first seven games, I was walked 15 times,” Barnhart said. “But one of my goals this year was to maintain a mature approach at the plate, control what I am able to control, maximize the pitches that are strikes and drive those pitches.”

Brownsburg coach Patrick O’Neil says that Barnhart’s philosophical approach to hitting has been a big part of his standout catcher’s success.

“He takes every swing in practice with a purpose,” O’Neill said. “He helps teammates with comments, demonstrations and he assists during drills. Tucker just possesses and aura of leadership, caring and commitment. The community, the fans and the players just love to be around him.”

When the draft finally rolled around, Barnhart was rated as a 5th round talent and the 16th best catcher available by Baseball America. He ultimately slipped in the draft due to signability concerns stemming from his strong commitment to Georgia Tech, which the Reds ultimately overcame by offering 4th round bonus money, much to the chagrin of GT head coach Danny Hall who obviously thought very highly of Barnhart:

"Tucker Barnhart, to me, is one of the best position players in the country. His primary position is catcher, but he can also play third and second base. A good tribute to him would be when a guy named Dave Alexander, who used to be the baseball coach at Purdue, told me this summer that he thought Tucker was probably a better infielder than he was a catcher, and we think that he is one of the best catchers in the country. He is just a very, very good baseball player and we are excited to have him."

Barnhart is a cerebral player, as even in high school he was charting pitches and doing advanced scouting on the competition during his days off. He seems to have the maturity necessary to bypass college and step right into the professional ranks. 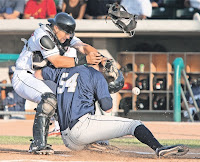 Barnhart spent the 2010 season strapping on the tools of ignorance for the Billings Mustangs of the rookie Pioneer League. On the season, he posted a solid slash line of .306/.412/.387/.800 with a rock solid 25/18 K/BB ratio in 131 plate appearances. Of his 34 hits, only 9, all doubles, went for extra bases. He also successfully swiped 4 bases in 5 attempts. He also handled both lefties and righties, hitting .278 against southpaws and .312 against northpaws. Overall, his season was strong enough to earn him Honorable Mention on the Pioneer League All Star Team.

Barnhart's type of performance speaks to an offensive game that is heavier on skills than tools, which may ultimately result in a high-floor/low-ceiling type offensive profile. A higher floor means lower risk of flaming out, but a lower ceiling means that he will need his defensive skills to help drive his value. His profile makes him something of a rarity, as most high school prospects are short on polish and long on upside. Barnhart is the opposite. However, if Barnhart can improve his tools, then he already has the skills necessary to turn them into production.

Barnhart is a legitimate switch-hitter who knows how to control the strike zone. From the right side, he has a quiet stance that is slightly wider than shoulder-width. He uses a high back elbow and a small bat waggle. He uses a small stride to transfer his weight forward to meet the pitch. He has a smooth, fluid swing, and gets good extension out through the pitch. He also uses his hands effectively, which enables him to make consistent contact and square up the ball. While his swing lacks power, it generates line drives at a good clip. 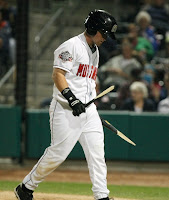 When coupled with his patience at the plate, his ability to make consistently hard contact gives him good control over the strike zone.

Currently, Barnhart has the ability to hit for average and get on-base, but it's questionable how much power he'll ever be able to generate. Given his build, there simply isn't significant physical projection to his game, which is potentially problematic in light of his current lackluster level of power. He did hit for solid power in high school, but the problem with evaluating high school prospects is that the level of competition tends to fluctuate wildly. He'll never have plus power, but the Reds can hope for average power. At the very least, he'll need to develop enough power to keep opposing pitchers honest. If he can't, then his on-base skill will largely be nullified by pitchers who aren't afraid to pound the strike zone. While his shorter stature may limit his power production, it also gives him a smaller strike zone to protect.

As a catcher with questionable power, Barnhart will have to lean heavily on his defense to carry him up the ladder. Fortunately, that's a reality with which he is well acquainted:

"My biggest strength as a player is my catching ability. I’m not the biggest guy and I really have to rely on my defensive ability to carry me places,” Barnhart said. “I try to maintain a ‘get after it’ mentality and not let anyone ever tell me that I can’t do something.”

Frequently, taller catchers have a difficult time both in getting low enough to be an effective receiver and in moving laterally. Fortunately, as Barnhart stands a mere 5'8" tall, he will certainly not face any such problems. In fact, he grades out highly across the board on defense and is very quick behind the dish.

Barnhart has very good catch-and-throw skills. His soft hands and feel for the position make him a very strong receiver. His agility and footwork are strong, so his lateral movement is quite good and allows him to effectively block pitches in the dirt. Footwork is very important to most defensive positions and that especially rings true for catchers. Barnhart utilizes his strong, quick footwork to help him get into proper throwing position very quickly, which enables him to control the opposition's running game. He has a very strong, accurate arm and a very quick release. He has "pop times" (basically, the time between the pitch hitting the catcher's glove until the catcher's throw hits the infielder's glove at 2nd base) of 1.8 seconds, which is very, very quick and helps explain how he threw out 45% of base stealers in 2009 and 51% in 2010.

Overall, Barnhart is very polished and highly skilled on defense. Additionally, he is quickly settling into a leadership role in the professional ranks, has good makeup, and a strong work ethic. All of these intangibles should ensure that he gets the most out of his abilities and help him ascend up the ladder.

Overall, Barnhart is an intriguing prospect with a nice blend of athleticism and polish. He provides plus on-base skill and plus defense at a premier defensive position, which alone could be enough to get him to the majors. It certainly worked for Ryan Hanigan, who possesses a similar skill-set. Despite the occasional Mike Piazza and Todd Hundley, catcher is, and always has been, a defense-first position. It's entirely possible that Barnhart adds additional power as he matures and fills out, but that could also rob him of agility and quickness. While his offensive upside is somewhat limited, his ability to switch hit gives his offensive game a bump in value due to the added versatility.

It'll be interesting to see how he develops, as there aren't many Major League catchers who stand only 5'8", but catchers with his defensive skills frequently find themselves in the majors in one capacity or another. It will be interesting to track his durability, as catcher is a physically taxing position and the grind may take more of a toll on a smaller player.

Overall, if Barnhart can continue to improve his offensive skills as he climbs the ladder, then he could end up as a legitimate catching option at the big league level. He's got a long way to go and he'll probably start off 2011 at low-A Dayton, but for now he checks in at #20 on the list.
Posted by Lark11 at 9:56 PM