Kyle Waldrop is a classic case: an athlete trying to develop the specific skills that drive success in professional baseball. Baseball isn't football or basketball or the criminal justice system, it doesn't surrender easily in the face of pure athletic brilliance.

Baseball makes you work. It values the subtle skills over the jaw-dropping tools, which explains why Kevin Youkilis carved out a stellar career, while the Wily Mo Pena Experience never caught fire.

Fortunately for the Reds and Waldrop, those baseball specific skills emerged in 2014, turning him from an athlete with tools into a baseball player with skills.

The Reds selected Waldrop out of Riverdale High School in Florida with the 367th overall pick in the 12th round of the 2010 draft. He might have gone higher in the draft if not for what was seen as a strong football commitment to the University of South Florida. A $500,000 signing bonus lured him away from the gridiron and he hasn't looked back.

Waldrop oozes athleticism. He was a Division 1 football prospect at wide receiver, but also played on the defensive side of the ball. Here's a look at his high school football prowess, courtesy of K Wally on YouTube:


He had the athleticism to play football at a high level and the good sense to choose baseball for a career path. Both positives on the ledger.

The light came on for Waldrop during the 2014 season. He started off with Bakersfield, a return engagement with the Blaze. His second spin around high-A was a substantial improvement over the first go around, as he posted a .359/.409/.516/.925 slash line with 6 homers, 11 steals, and a 56/22 K/BB ratio over 288 Plate Appearances. That performance earned him a promotion to double-A.

For Pensacola, Waldrop kept crushing, barely falling off against much more advanced pitching, and proving that his early season performance was driven by more than a hitter-friendly home park in a hitter-friendly league. For the Blue Wahoos, he hit .315/.359/.517/.876 with 8 homers, 3 steals, and a 44/17 K/BB ratio over 252 Plate Appearances.

As for his plate approach during the 2014 season, I was pleasantly surprised and rather impressed. The general impression that I formed in watching him play is that he's an aggressive hitter with good pitch recognition skills who really doesn't chase the ball out of the zone very often.

As for specific impressions, here are a few of the things that I saw:


Waldrop frequently jumped on the first pitch and showed strong pitch recognition. His aggressiveness will likely prevent him from posting strong on-base percentages, but should also help limit the strikeouts. He also doesn't have a ton of swing-and-miss to his game, as he does a nice job of getting the barrel of the bat on the ball. He seems to be able to to recognize and dismiss pitches easily, especially when he has count-leverage and can look for the pitch and location he wants. When he loses count-leverage, then his recognition and approach both seem a bit weaker. Still, his overall approach is strong, even though he's not quite as patient or disciplined as one might wish.

Overall, it was a successful season of realized potential for Kyle Waldrop.

Waldrop uses a set of solid, fundamentally sound swing mechanics. It's not surprising that Waldrop and Winker are frequently mentioned in the same sentence, as they resemble each other at the plate, same handedness, similar physical builds, and even a small arm-bar in their swings.

Waldrop's pre-pitch stance is quiet with a small bat waggle. He sets his feet slightly wider than shoulder-width. It actually reminds me quite a bit of Jason Giambi.

The similarities between the two end once the swing fires. For one thing, Waldrop's hands aren't as far back as Giambi's, which gives him a slightly longer path in loading the hands.

Once the pitcher drives to the plate, Waldrop uses a small stride forward to trigger the weight transfer, while at the same time drawing his hands back to load up in the swing. He has a fairly deep load, which straightens his lead arm almost to the point of an arm-bar:

Despite the deep handset and near arm-bar, Waldrop still manages to create a relatively short, compact swing. He does so in part by using "bat lag", which is a positive component of the swing and refers to the barrel of the bat lagging behind the hands in the swing. The longer the hitter can maintain that lag, the more power will be generated by the swing. When the bat emerges from the lag position, the barrel comes around and into the point of contact.

Waldrop maintains a somewhat smaller "lag angle" (angle between lead arm and bat), which comes along with a slightly steeper and more direct angle of attack. This lag angle helps him generate good power by delaying the release of the barrel in the swing and allowing the rotation of the shoulders to both create power and deliver the bat to the point of contact. 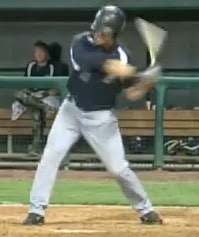 Waldrop also does a nice job of driving the back elbow into the back hip, effectively syncing the upper body with the rotation of the hips. The left photo above is a tick earlier in his swing than the photo on the right, and, in going from the left photo to the right, you can almost see the explosive rotation in the front hip.

While Waldrop's pre-pitch stance reminds me of Jason Giambi, his swing reminds me more of Kole Calhoun. Both use a compact, but powerful stroke that frequently involves keeping both hands on the bat during the follow-through. Also, slightly stockier type bodies and a consistent ability to make hard contact. Just good, solid hit tools.

Waldrop does a nice job of firming up his front side to give the force an anchor point around which to rotate. He also maintains good balance throughout the swing, generating power without losing body control.

If I have a concern with Waldrop's swing, it's that his stride occasionally gets disconnected from the swing. Once in a while, he strides early, then has to pause slightly before firing his swing. That break interrupts the creation and effective transfer of force, leaving him with a largely upper body swing. The lack of effective use of the lower body reduces the force generated in the swing. Of course, he doesn't do it all the time and it's not an issue that should be difficult to eliminate.

Overall, it's a compact swing that generates significant power, which is a valuable, and unique, combination of attributes for any hitter. Frequently, power requires length in the swing, so being short and powerful should allow for good contact AND good power.


Here's a look at Waldrop at the plate, courtesy of Moore Baseball on YouTube:

On the defensive side of the game, Waldrop can handle leftfield. He has good athleticism and average speed, but his arm strength is a tick below average so he probably can't slide over to rightfield. To increase his versatility, Waldrop has started working at first base and he should be able to handle that position just fine. However, Joey Votto's presence means that, barring injury, there won't be much opportunity for Waldrop at 1b.

In the final calculus, Waldrop is a bat-first prospect who will go as far as his offense will take him. His defense isn't a drag on his value, but his defensive ceiling is probably average, which isn't ideal for a player already relegated to the bottom of the defensive spectrum.

Given that Votto is entrenched at first base and Jesse Winker is likely the future in leftfield, it'll be interesting to see how Waldrop figures into the organization's future plans. If he hits enough, then he'll force his way into the lineup.

Defense won't be a value-driver for Waldrop, but it also won't act as a drag on his value.

Kyle Waldrop can hit. He has a solid hit tool and good power. He's an aggressive hitter, so drawing walks won't be his forte, but he also doesn't chase the ball outside the zone all that often. His aggressiveness seems to be of the "in-the-strikezone" type of aggressiveness, which is a good thing for a hitter with his combination of hit-tool and power.

Overall, Waldrop seems to have really figured things out at the plate, which is good enough to land him at #8 on the list.