Raisel Iglesias successfully defected from Cuba in November of 2013. The Reds signed him in June of 2014 to a 7-year contract worth $27M, including a $5M signing bonus. Here's what Walt Jocketty had to say at the time of the signing about what the organization's scouts saw in Iglesias:


"They felt he had four quality pitches," Jocketty said. "They felt he could be a starter and be a starter very soon. They've seen him pitch several times three innings of relief, and when we get him to the United States and a little bit stronger, we feel he'll be a starter in the next year or so, hopefully."


And, here are Mark Sheldon and Jesse Sanchez on Iglesias' experience in Cuba and in international competition:

"Iglesias pitched three seasons for Isla de la Juventud in Cuba's Serie Nacional, the island's top baseball league. He had a 1.68 ERA with 20 walks and 50 strikeouts in 15 games (two starts) during a span of 53 2/3 innings, during the first half of the 2012-13 season, but he struggled with his command in the second half and finished with a 3.29 ERA.

Iglesias also shined for the Cuban national team at the World Port Tournament in the Netherlands and during Cuba's five-game series against the U.S. college national team last summer.

Iglesias gave up two runs and three hits while striking out over 4 2/3 frames in five games during the World Baseball Classic for Cuba in 2013."


Iglesias signed too late to log any time in the minor leagues in 2014, so his organizational debut occurred in the Arizona Fall League.

Iglesias logged a mere 7.0 innings in the AFL, but undeniably he was impressive in that stint. He posted a 0.00 ERA and a 7/3 K/BB ratio with only 1 hit allowed. Obviously, small sample caveats run rampant here, but I watched him pitch an inning and his stuff and command supported the performance level. He looked good, especially for someone pitching after such a long layoff.

Despite limited experience on American soil, the now 25-year old Iglesias has obviously turned the right heads in the organization, as he's laid claim, at least in the short-run, to a spot in the 2015 MLB rotation. In the long-run, he hasn't proven any more than Tony Cingrani that he's able to handle the responsibilities of an MLB starting pitcher.

Iglesias is listed as being 6-2, but some people peg him as closer to 5-11. Even setting aside the height issue, he has a slender type frame, so he's not a big framed pitcher by any definition. That said, he has a loose athleticism that creates some explosiveness in his delivery.

The defining characteristics of Iglesias' delivery are a quick tempo and a general looseness. His arm action is quick, fluid, and loose.

Iglesias stands with his right foot rotated on the rubber positioned on a 9-to-3 o'clock line, while his left foot runs more 1-to-7. He then uses an aggressive rocker step towards first base to start the delivery before bringing his left leg up into the leg kick. He is very fluid and strong in going from rocker step to leg kick to unpacking the leg kick to drive to the plate. His moves are performed with confidence and intent. At the apex of the leg kick, his knee is up against his chest and he incorporates a significant amount of body coil, to the point that he shows the number on the back of his jersey to the hitter. It's not as extreme as Johnny Cueto, but it's pronounced.

After he breaks his hands from apex, he starts his arm swing, dropping his pitching arm down in a half-circle, before bringing it up into throwing position. At the bottom of his arm swing, Iglesias uses a bit of a wrist-wrap (see photo below), which some theorize adds a bit of fatigue and stress to the arm over the course of 100 pitches.


As Iglesias drives to the plate, he brings his arm up into throwing position in a timely manner. In addition, he maintains good elbow position relative to shoulder throughout the delivery and throws from a high three-quarter arm slot, though once in a while the slot seems to vary depending on the pitch he's throwing. That's not unusual in Cuban pitchers, but it's problematic if you believe in the benefits of Pitch Tunneling.

In his drive to the plate, Iglesias uses a long stride. It feels like he shortened it up a bit from the one he utilized in his Cuban days (see photo below), but it's still interesting to see just how far he can stride and still get his upper body out over his stride leg. That speaks to good athleticism.

A long stride allows ample room for the hips to fire and clear, which is important for hip/shoulder differential and, therefore, the efficiency of the kinetic chain. It also allows the pitcher to release the ball slightly closer to homeplate, allowing his velocity to play up a tick.


Unfortunately, Iglesias has two components to his delivery that nullify the unrealized hip-clearing benefit of the longer stride: (1) a Cueto/Tiant twirl (see photo below) and (2) a closed off stride.

As to the first, Iglesias uses a Cueto/Tiant like move at the apex of his leg kick, rotating his upper body and showing his back to the hitter. As I've talked about with Johnny Cueto, the potential problem with this type of move is that it forces the hips and shoulders to uncoil at the same exact time. Instead of a differential between the rotation of the hips and the rotation of the shoulders, they become one piece. As a result, the drive to the plate becomes much more rotational, which is inevitable when the lower and upper body are opening up in sync via the same movement. Given that, it's not surprising that the momentum of this more rotational delivery pulls both Cueto and Iglesias to the first base side on the follow-through.

As to the second, Iglesias also falls off to the first base side for another reason: he uses a closed off stride. His stride foot lands significantly closer to the third base side than normal (see below photo), which forces him to throw across his body. So, he has something of a cross-fire delivery, which forces the momentum to work around his closed off stride position, rather than more directly towards homeplate. The inevitable result of the cross-fire delivery is falling-off-to-first-base in the follow-through. 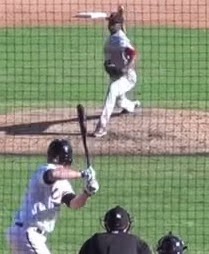 Given the lack of hip/shoulder differential, it also wouldn't surprise me if Iglesias suffers the same type of strains of the oblique/lat that Johnny Cueto suffered. But, people are different and Cueto has a different body type than Iglesias. Cueto is thicker and tighter, whereas Iglesias is much leaner and looser, so maybe he's better equipped to avoid those ailments.


Here's a look at Iglesias pitching in the AFL, courtesy MLBProspectPortal on YouTube:

And another look at Iglesias, this time a slow-motion look courtesy of MooreBaseball on YouTube:

Here's a final look, courtesy of Mike Rosenbaum on YouTube:


Overall, Iglesias has some funkiness to his delivery. The wrist wrap, Tiant Twirl, and cross-fire delivery are potential red flags and I wonder if his velocity and power are more the result of a naturally quick arm action than of the force generated by the body and transmitted to the baseball. I don't love his mechanics, but maybe a very quick, very loose arm make those issues moot.

As it stands, Iglesias is having good success and is on the fast track to the big leagues. It'll be interesting to see how his arm handles a full starter's workload.

Iglesias works with a 4-pitch mix: a four-seam fastball that sits 92-95, a plus-slider, a hard curveball, and an inconsistent changeup. It's a mix that should allow him to be an effective starting pitcher.

When I saw him in the AFL, the slider was the true standout. It had very good depth and power and two-plane break. He threw it hard enough to back-foot it to lefties, so it could be an effective pitch to hitters of both handedness. In addition to the slider, the fastball was also a strong pitch, as it had good velocity and he commanded it well.

Working in relief, a well located fastball and a nasty slider were really all he needed to succeed in the AFL. As a starter, he'll need to reintroduce his changeup and curveball into the mix. Given his polish and command, he won't need maximum velocity on the fastball to succeed, but he will need to carry some velocity with him to the rotation.

As of now, there really isn't much of a track-record to work off with Raisel Iglesias. However, in the outing I saw in the Arizona Fall League he looked electric. The fastball was popping with good velocity and location and the slider was a put-away, swing-and-miss pitch. He now has to prove that he can be electric enough over longer outings to be a successful starting pitcher at the MLB level. And, he needs to establish a track-record for durability as a starting pitcher.

Still, a well commanded fastball and a plus slider is a good place to start, so for now Iglesias lands at #3 on the list.