I first saw A.J. Puk during his sophomore season at the University of Florida. It didn't take long for me to identify him as a target for the Reds in the 2016. He hasn't done anything to change my mind and he's certainly convinced a lot of people, as he's the odds on favorite to go first overall.

The first impression of Puk has to be his stature. He stands an imposing 6-7 and tips the scales at 230 lbs. So, he's not a long, lanky lefty in the mold of Randy Johnson or Chris Sale. He's already filled out physically and seems more coordinated and in control of his longer levers than the typical tall pitcher.

Here's a look at Puk in action, courtesy of Adam McInturff on YouTube:


Puk has clean mechanics and less than max effort delivery. There aren't any red flags to his mechanics. Puk stands tall on the rubber with his shoulders running from 2nd base to home plate and he starts with a stride back towards third base. He brings his leg up into his leg kick and gets very good differential between the rotation of his hips and shoulders, which should improve the efficiency of the kinetic chain and reduce the strain on his arm. 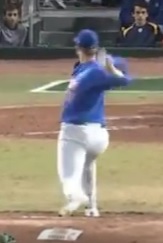 Puk throws well with his entire body and his height allows him to release the ball closer to home plate, helping his pitches get on the hitter faster than expected.

His arm action is clean, as he keeps his elbow in good position relative to his shoulder. He has struggled at times with consistency and he occasionally spins off the rubber towards third base on his follow-through. However, when he stays on-line to the plate, he's more consistent and efficient.

Puk features a 3-pitch mix, including a plus fastball that sits in the mid-90s and can touch the upper 90s, a sweeping slider that sits 88-90 mph, and an inconsistent change-up that's currently below average. In essence, Puk is a two-pitch pitcher, leaning heavily on the fastball/slider combination. His explosive fastball is his bread and butter, but the slider can be plus and a nasty pitch.

Puk hasn't quite separated himself from the pack like many expected, which is due to inconsistency. His performance level has been 1.1 pick worthy at times, but he's also had stretches of underwhelming performance. He struggles with command and doesn't dominate quite to the degree that many would expect.

My main concern with Puk is that all of his pitches are hard, he doesn't really have the ability to work in a lower velocity tier. I was really high on Chris Sale a few years ago and part of that was his change-up, he wasn't just a high velocity guy. He had the ability to change speeds and locate his pitches. He was more polished and could work effectively in multiple velocity tiers.

The fact that Puk works heavily with a hard fastball and slider makes him slightly higher risk, as he just has less diversity to his arsenal. It'll be interesting to see if his performance level dips when he joins the professional ranks, as hard fastball won't blow away professional hitters quite as easily as it does college hitters.

Overall, there is a lot to like with Puk. He has good size, clean mechanics, an elite fastball, and an occasionally nasty slider. However, there is some risk there, too, as he has been inconsistent with his command and doesn't have a strong third pitch.