Confession. I don't like the University of Miami Hurricanes, but I like Zack Collins. He can rake. In his three seasons with the Hurricanes, Collins has been an impact hitter and improved each season. Here are his slash lines for each of the seasons:


Here's a look at Collins in action, courtesy of Matt Czechanski on YouTube:


I love the way his arms and upper body work in the swing. He has a significant bat tip to his swing and it's surprisingly late in the pitch (see below), but he generates a tremendous amount of bat speed and power. The bat tip is part of the loading of his hands. He loads down, instead of back. The bat tip allows him to remove the slack from his muscles and maximum the power he can generate.

He loads well into his back hip and has very strong hip rotation. Despite generating very good bat speed and rotational force, he maintains balance throughout his swing. 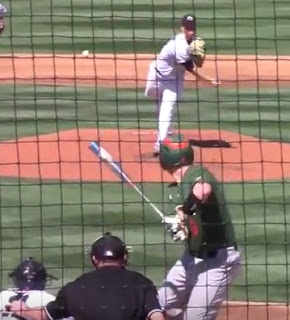 In addition to his strong hit tool and powerful swing, he controls the hell out of the strike zone. His pitch recognition is very good and he doesn't go outside the strike zone very often. He forces the pitcher to come into the zone.

Strong swing mechanics, very good power, a good hit tool, and the ability to control the strikezone are an impressive package. He'll go as far as his offensive game will carry him, because the defensive side is far less impressive. Fortunately, it should carry him a long way.

Collins is a catcher, but the jury is still out on whether he can stick there. And, if he doesn't stick there, then he's probably a 1b/dh type as his foot speed is below average. His arm strength isn't great and his lateral movement isn't much better. Still, if he can be somewhere close to average, then he's a very intriguing option.

Given that defensive profile, Collins might be better suited to the American League where the DH is a viable fallback option. Given that the Reds already have Votto locked in at first base, they wouldn't really have a fallback option for Collins.

On the other hand, the Reds seem to be gaining a reputation for developing catchers. Some have gone so far as to call it a core competency of the organization. So, maybe it makes some sense for the Reds to snag another catcher, especially given Devin Mesoraco's injury problems and degenerative hip condition.

Zack Collins' bat really impresses me. He's projected to go in the top 15 picks, but maybe he should be projected to go higher. However, if the Reds were to grab him at 1.2, then they could very likely get him signed to a below slot deal, which would allow them to go over slot with their later picks. Another possible benefit to grabbing Zack Collins.

I've been trying to talk myself out of Zack Collins, but he's on my very short list of players for the Reds to draft.