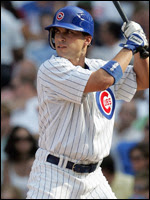 The explosion of power in the modern game has made it difficult to find quality leadoff hitters. Accordingly, you have to look harder to find one. That leads us to Sam Fuld, a centerfielder in the Cubs system.

Sam Fuld had a storied offensive career at Stanford, where he led the Cardinal to the College World Series final 8 in 2002 and 2003. He was a three time All American and three time Pac-10 Conference All-Star.

Fuld set the College World Series record for hits with 23. His performance caught the eye of the Cubs, who drafted him in successive years to ensure they got him.

Fuld doesn't have much power, but he seems ideally suited for the leadoff spot. He excels at making solid, consistent contact and 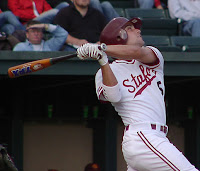 sending line-drives from gap to gap.

Perhaps most importantly, Fuld has very strong plate discipline, which is consistently rated as the best in the Cubs system. Over the course of his minor league career, Fuld has walked in 10% of his plate appearances. His IsoOBP (OBP-BA) is .081. His minor league career has seen him post a BB/SO ratio of 140/141.

Fuld has all the tools to be an effective leadoff man, but he'll need to raise his game at the MLB level. If he can hit .285 at the MLB level, that would likely give him a .375 OBP, making him a strong leadoff option.

However, Fuld will likely need to demonstrate a bit of pop to keep the outfielders honest, otherwise they'll play shallow and rob him of would-be hits. 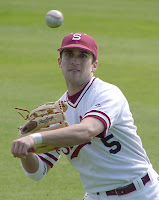 Fuld plays a strong centerfield and has good range. However, arm injuries have sapped his arm strength, which was never tremendous before the injury. That said, while his arm strength is below average, it is still likely to play just fine in the majors.

Fuld goes all-out, all the time. He's a smart player who also leaves it all on the field, which is exactly what you want in a ballplayer.

Fuld does not possess tremendous speed, but hes' a smart percentage player with good instincts which allows his speed to play up a notch. He picks his spots well and has a solid stolen base success rate. In the minors, he has 52 stolen bases in 69 attempts, which is good for a 75% clip.

The 2007 Baseball America Prospect Handbook has Sam Fuld listed as the 27th ranked prospect in the Cubs system. Fuld lacks the raw tools of an elite prospect, but he's a smart and savvy baseball player. 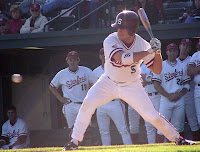 Fuld starred for four seasons at Stanford, setting the College World Series record for career hits with 24 and graduating with an Economics degree. The Cubs drafted him in the 24th round in 2003 and again in the 10th round in 2004. The Cubs signed him for $25,000 as a senior sign. He partially tore his rotator cuff and labrum in his throwing shoulder in one of his final games for the Cardinal, so Fuld didn't make his pro debut until 2005. He reinjured his shoulder again that year, jamming it on a headfirst slide. A bulging disc in his back cost him two weeks in the middle of 2006, and his season ended with a hip injury in July. To top it off, eh had surgery to repair a sports hernia in November. When healthy, Fuld has put up consistent numbers in two years at Class A. He has the best strike-zone discipline in the system, which led to a 17-game hitting streak and a 33-game on-base streak in 2006. He doesn't have much pop, but he stings line drives all over the field. He has slightly above-average speed and basestealing savvy, succeeding on 22 of 25 attempts last year. He gets good breaks and plays a solid centerfield, though his arm is below average. Fuld could crack the major league as a platoon or reserve outfielder, but he'll have to stay healthy to do so. He's ready for Double-A this year.

Fuld made his major league debut in 2007, where he got 9 plate appearances. He earned 3 walks, struck out 3 times, and went hitless in 6 ABs. In his 9 Plate Appearances, he saw 46 pitches, which works out to 5.11 pitches per plate appearance. While he was hitless, he certainly was patient. Most rookies get very aggressive in their MLB debut, so it's interesting to see Fuld take so many pitches.

In addition, Fuld played 22 innings in right field for the Cubs, where he acquitted himself very well, posting a 1.000 Fielding Percentage, a 1.000 Revised Zone Rating, and even posted 1 assist.

Currently, Fuld is playing in the Arizona Fall League for the Mesa Solar Sox, where he's hitting .378/.477/.622/1.099. While the AFL lacks quality pitching this offseason, Fuld's performance is still impressive. If he keeps it up, he won't be undervalued for long.

Given that Fuld lacks elite tools, it's possible that he may not hit enough to earn a starting job. If so, then he'll be relegated to a career as a 4th outfielder. However, given that he's now getting healthy for the first time in his professional career, I expect to see him take a step forward.

However, the injury problems have him a bit undervalued, so the cost of acquiring him would be minimal and the potential reward is substantial. The risk/reward balance on Fuld is just right, so he might end up being a steal for some lucky team. He might be the leadoff hitter and table-setter that the Reds have lacked for so many seasons.
Posted by Lark11 at 3:45 PM