News on the Manager Search

With the 2007 season in the rearview mirror, it's time for the Reds to bring looking towards 2008. In that spirit, Wayne Krivsky announced that the Reds would begin their search for a manager in earnest. The Reds will be looking at candidates from outside the organization, as well as interim manager Pete Mackanin. That said, it's difficult to envision Mackanin being retained as manager for 2008 and beyond. One would think that if that was going to happen, it would have happened before now.

"Pete is a candidate. He's definitely a candidate," Krivsky said. "People ask me about timetables and there isn't one. I'd rather get something done sooner than later. The sooner we know, it takes the uncertainty out of people's minds that are here."

The other 3 interim managers in the majors in 2007 (Cecil Cooper, John McLaren, and Dave Trembly), all had their interim tags removed already, so it's difficult to imagine the Reds giving Mackanin serious consideration at this point. The Reds desire to go outside the organization would seem to provide substantial evidence that they do not view Mackanin as a viable long-term option.

Given the Reds instability at the manager spot over the past decade or two, the Reds seem to be handling the situation wisely. To take the next step, the Reds need to continue to fill each spot in the organization with a quality option. Adding a top notch manager to the mix could bring the Reds much needed stability. 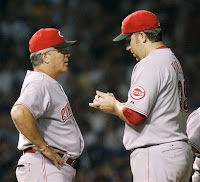 It's obvious that the Reds recognize the importance of getting it right this time, so expanding the search to outside candidates is a very good sign. To take a step forward, the Reds need to continue adding pieces to the puzzle. Adding a top flight manager would be a big piece.
Posted by Lark11 at 4:06 PM