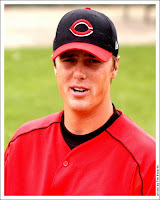 In 2007, Jay Bruce took a massive step forward, excelling at three separate levels and earning Baseball America's Minor League Player of the Year Award. At this point, he is the consensus #1 prospect in all of baseball. Not only did Bruce excel, but he made it look easy.

The Reds selected Bruce out of West Brook High School in Beaumont, Texas with the 12th overall pick in the 2005 amateur draft. The 2005 draft was an epic draft loaded with talent, including Justin Upton, Alex Gordon, Ryan Zimmerman, Ryan Braun, Troy Tulowitzki, Cameron Maybin, and Jay Bruce. As good as all those guys are, the 20 year old Bruce certainly belongs in that class.

Bruce's ascension up the ladder mirrored that of Johnny Cueto. He started out the season in High-A ball, where he hit .325/.379/.586/.965 in 268 At Bats. He hit 11 homers and had a 67/24 K/BB ratio. He had an impressive line drive percentage of 21%. The Reds took mercy on the pitchers in the Florida State League by promoting Bruce to Double-A.

At Chattanooga, Bruce continued on his offensive tear posting even better numbers against more advanced competition. He posted a line of .333/.405/.652/1.057 in 66 At Bats. He had a 20/8 K/BB ratio and hit 4 homeruns. In addition, he had a line drive percentage of 17%. Yet again, the Reds took mercy on the opposition, promoting Bruce to Triple-A.

Bruce rocketed up the ladder and excelling at each and every stop along the way. At this point, 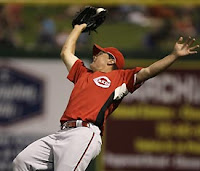 he has little left to prove in the minors. He has a tremendous swing that generates a lot of line drives, which are much more likely to fall in for hits than other types of balls in play. Just about the only weakness in Bruce's game is his propensity to strike out. However, he certainly has been tremendously productive, so the type of outs he makes is not a major concern. Ideally, he'll reduce his strikeout rate, but his production is what's important.

Bruce has quick hands and a smooth swing that keeps the bat in the strikezone for a long time. His hands are so quick that he has little problem turning on 95 mph fastballs. He is not solely a pull hitter and he can effectively go the other way with pitches on the outer half.

Bruce's offensive skills have quickly made him one of the best hitters in the minors. He has good pitch recognition skills for a young hitter. He utilizes a wide batting stance, which gives him a solid foundation. His swing is fairly level and produces a lot of hard line drives, which is also a result of his tremendous bat speed. He has good hand action in his swing and maintains good balance throughout. In addition, the ball really jumps off his bat. He's the type of hitter that you can tell is special just by watching him in batting practice. If you saw his line drive in the futures game, then you know you can also tell that he's special just by the sound of the ball coming off the bat. That hit sounded like a rifle shot coming off the bat.

Bruce also has slightly above average speed, which may result in double digit stolen bases. All in all, there is very little on offense that Bruce cannot do.

You can access the link to Bruce's MLB draft scouting video here.

Bruce is going to be a special offensive player for a long, long time. 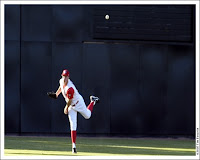 On defense, Bruce actually prefers to play centerfield, which he can handle adequately, but his range plays better in rightfield. Bruce also possesses above average arm strength and good accuracy. Given the Reds crowded, yet consistently unsettled outfield, Bruce could play any of the three positions, but ultimately his home is likely to be rightfield.

Bruce is a legitimate 5-tool talent who has yet to reach his 21st birthday. Bruce should be an MLB superstar for years to come. For the first time in a long time, the Reds have the best prospect in baseball. Bruce will be ready for the majors at some point in 2008, but he may have to wait for a starting job until after the 2008 season and the departure of Ken Griffey Jr.

Bruce's superstar future makes him the easy choice to top the list as the #1 prospect.
Posted by Lark11 at 3:32 AM