Checking up on the Day 1 Draft Picks

The Reds have had time to sign and assign several of their first day draft picks, some of whom have made impressive debuts. All teams have until August 15th to sign their draft picks, after which time unsigned players go back into the draft pool for the 2009 draft. 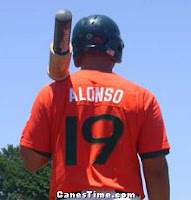 Yonder has yet to sign, as his team's time in Omaha at the College World Series has delayed the signing process. However, thanks to my Stanford Cardinal, Yonder and the Miami Hurricanes were bounced fairly early from the tournament, so contract negotiations should be well under way. Still, sometimes high first round draft picks don't sign until the other high picks starting signing to set the market. It creates a kind of domino effect, but the Rays signing #1 overall pick Tim Beckham for a reported signing bonus of $6.5M should help speed the process along.

The Reds signed Stewart to his first professional contract and assigned him to low-A Dayton. Despite vaulting over the rookie leagues entirely, Stewart has posted very good numbers in the early going. In 6.0 innings for Dayton, Stewart has allowed 1 hit and 0 runs. In addition, he boasts a 3/0 K/BB ratio and a 2.75 GB/FB ratio, which is what Reds fans want to see.

Stewart was a closer out of Texas Tech, so his polish was part of what got him drafted. Still, if he can have early success at Dayton, then he could possibly move very quickly up the ranks. He throws a heavy ball and hopefully he can continue to rack up the groundball outs.

The Reds have signed Tyler Cline to a professional deal and assigned him to the rookie league Golf Coast League Reds, where he will play under manager Pat Kelly.

Given his build and age, I would say that this is a pure projection pick by the Reds. Cline has the build of a power pitcher and reads are probably dreaming on what he could become. Cline wasn't well known heading into this draft, so it'll be interesting to see what he brings to the table.

Shunick is under contract and was sent to rookie league Billings, where he is pitching for the Mustangs. Shunick seems the opposite of Cline, as he is a pitcher who is fairly polished, but seemingly lacking much projection. His mechanics are rather unorthodox and could become problematic as he advances up the ranks.

At Billings, Shunick has had a bit of a rough start. In 8.0 innings, Shunick has given up 12 hits, posted a 7/2 K/BB ratio, a 6.75 ERA, and a 1.75 WHIP. Given that he's only given up 2 walks and 1 homer, it seems likely that his numbers will improve in a hurry. Nothing to worry about at this point, but given his polish and the level of competition, it's far from an ideal debut.

Now, here is a guy to watch. I've got a fairly good feeling about Alex and think he could be an interesting prospect. He strikes me as a Chris Valaika type. A good hitter who may lack the glove to handle shortstop. Still, a middle infielder who can rake is worth his weigh in gold. And, that's pretty much all Buchholz has done so far in his professional career.

It's difficult to imagine a better way to start your professional career.