J.P. Riccardi, Adam Dunn, and a Lack of Team Unity

"You know the guy doesnt have a passion to play the game that much?"

"We know a little bit more about him than the average fan does." 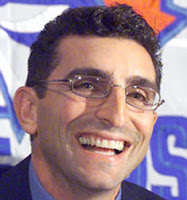 Those choice comments brought to you by the brain of Toronto Blue Jay GM J.P. Ricciardi. Ultimately, these comments reveal more about the Reds team than they do about Ricciardi or Dunn.

Ricciardi is rapidly proving himself to be a hothead lacking in sound judgment, as evidenced by the lies he told to the media about the true nature of B.J. Ryan's injury, the shoddy treatment of future Hall of Famer Frank Thomas, and now his harsh comments about a player in another organization. Most GMs refrain from commenting on players in other organizations, likely out of fear of a tampering allegation, but while Ricciardi's comment are rather unlikely to have been designed to woo Dunn to the Great White North, it is still very bad form to criticize a player in another organization.

As for Dunn, he handled the situation well, which isn't all that surprising. For all the criticism he takes, Dunn typically comports 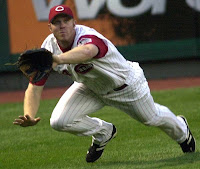 himself well with the media and seems to have a good head on his shoulders. No, what was truly revealing about this scenario is the lack of team unity in the Reds organization.

One would think that when someone outside the organization attacks a teammate, employee, and friend that someone would step up to protect him. Well, I suppose that did happen, but it didn't come from the right place.

Of all people, Reds team physician Tim Kremchek was the only one to stand up.

Kremchek, unlike Ricciardi, knows Dunn quite well. The two met in 1998, shortly after the Reds drafted Dunn, in the private box of the team's late owner, Marge Schott.

In addressing the notion that Dunn lacks passion and dislikes baseball, as Ricciardi alleged last week during a radio interview, Kremchek said that just the opposite was true.

"There is no player in this game that I've ever treated who had the things that he had and continued to play," Kremchek said.

Dunn, a former quarterback who received a football scholarship to the University of Texas before turning to baseball full-time, maintains his football mentality with injuries.

In 2005, he played with a broken right hand for a substantial portion of the season. The injury was not revealed until the following January when Jerry Narron, then the Reds' manager, said that Dunn, "broke his hand twice last year and wouldn't let us X-ray it because he wanted to play."

"I could feel the bone moving in his hand," Kremchek said. "It wasn't something that was going to cause permanent damage, but it hurt like hell. When I pushed on it, you could tell."

Kremchek also recalled a night when Dunn, 6-foot-6 and 275 pounds, ran into a wall, required 12 to 15 stitches to repair a gash in his leg and played the next day.

Then there was the time, Kremchek said, when Dunn bowled over a catcher in San Diego, wound up with a swollen, bruised leg and again remained in the lineup, refusing to acknowledge the injury.

"Last year, early in the season, he couldn't stop in the outfield," Kremcheck said. "But he didn't come out of games. He never complained. He never told the manager he couldn't play."

Dunn missed the final six games, but only after appearing in 152. He also played in 160 or more games in each of the previous three seasons, as well as 158 in 2002, his first full season. His only career trip to the disabled list was in '03, when he did not play after Aug. 15 due to a sprained ligament in his left thumb.

Kremchek acknowledged that Dunn does not always show passion on the field, at times looking lackluster, like he doesn't care. But he strongly disputes Ricciardi's suggestion that Dunn is some kind of baseball slacker,

The question this raises is: Where is the guy in the clubhouse who says that if you attack one of my teammates, you are attacking the entire team?

It's rather appalling that the entire team seemed to take it lying down. Someone should have stood up for Dunn and called out J.P. Ricciardi. There just doesn't seem to be any pride about being a member of this organization. Typically, I'm not one for brash ballplayers, but this team needs a little swagger. It needs an identity. It needs a bit of the "We're the Cincinnati Reds and we're here to kick ass and chew gum....and we're all out of gum" type attitude.

It's too much to ask of him and not realistic, but I would have LOVED to see Jay Bruce step up for Dunn and rip J.P. in the press. He's the heir to the throne and it would be nice to have a homegrown leader in the clubhouse. It would take a very mature rookie to be able to do that, but how much respect would he have earned by doing that? Rookies are supposed to know their place, but he could have grabbed the leadership role for this team and perhaps galvanized the team a bit in doing so.

The biggest problem that I have with the Reds is that year in and year out, the team ALWAYS seem to be less than the sum of the individual parts. Seriously, we are a team of underachievers and maybe this is a small glimpse of why that's the case. Where's the unity? The cohesion? The outrage?

At this point, I'm really not sure that there even IS a team mentality with these players. Frankly, that's why this clubhouse needs a nice house cleaning. Get some players and a manager in here who are proud to be wearing the Reds uniform every day. Players who treat an attack on one as an attack on all. If we can't foster that type of attitude in the players, then we need to bring in a manager who embodies it. Dusty Baker's tooth-pick chewing, back-slapping style just isn't what this team needs. We need a blue-collar, fiery manager who knows how to get the most out his players. A manager who has the respect of his players, but isn't afraid to get right in their faces. A manager who can instill a sense of pride and respect about simply being part of the organization.

Until that time, I don't think this team goes anywhere. Until that time, this is just a bunch of individuals going about their business and collecting huge pay checks. This is storied franchise, but it's time to bring the pride back the Redlegs. Until that time, the Reds will remain an also-ran and second division ball club.
Posted by Lark11 at 12:04 AM