By this time tomorrow all of the wondering, prognosticating, and pontificating will be done. The Reds will have made their first round pick and a few more. So, let's take one last look at who the Reds are projected to take tomorrow.

Starting off with the mock draft from Baseball Prospectus, which projects us to take Canadian infielder Brett Lawrie. Lawrie has moved up the charts in a hurry over the past few weeks and he impressed the Reds so much that they brought him in for a private workout.

Here is what Baseball Prospectus had to say:

"The Reds are lining up to throw the first real curveball of the first round. They have been heavily scouting the top group of college sluggers, as well as Gordon Beckham, while also dreaming of a scenario that would drop either Matusz or Crow to them. However, a surprising new name has entered the mix—the Reds were in hard on Canadian prepster Brett Lawrie after he went off with eight home runs in eight games against professionals in the Dominican, and they came back with reports encouraging enough to prompt a quickly-scheduled private workout on Tuesday afternoon. As one scouting director put it, “If there’s anyone who can improve his stock with a private workout, it’s Lawrie.” Assuming all went as expected, the surprises start at lucky number seven. If they decide to play it safe, Alonso is currently at the top of their board.
Selection: Brett Lawrie, INF, Brookswood SS (BC)"

The Reds have had tremendous success with Canadian prospects, as evidenced by Joey Votto and Kyle Lotzkar, so it's probably not surprising to see the organization once again turn its eyes towards our neighbors to the north. Whoever scouts that region for the Reds is certainly earning his money.

As for Lawrie, his calling card is his plus-plus power. In addition, he has a plus arm. He is currently listed as a catcher/infielder, as he has yet to settle into a position full-time. He recently has been playing short and some catcher. He's a good athlete and may ultimately develop into a quality defensive catcher, much like Russ Martin of the Dodgers. However, given that the Reds selected Devin Mesoraco last year and Lawrie's lack of polish, he may not be the best choice at #7 for the Reds.

Lawrie played for the Canadian travel team the Langley, B.C. Blaze and the Canadian Junior National Team. He acquitted himself well against college teams and the K.C. Royals' extended spring training squad. Some scouts believe Lawrie to be the best Canadian hitting prospect since Larry Walker and Justin Morneau.

Lawrie has massive offensive upside, but the lack of a defensive position makes him an unusual prospect. He may ultimately have the skills to settle into a premier defensive position, but teams may not want to wait on his glove to catch up with his bat. So, he could end up at a less challenging corner spot to speed his development.

Lawrie looks to be a strong prospect, but the Reds have enough problems defensively already. In addition, the Reds renewed focus on prospects who play the premier defensive positions would make Lawrie an unlikely addition.

Despite earlier projecting the Reds to take University of Miami first baseman Yonder Alonso, Jonathon Mayo is now stating that he is "fairly certain" that the Reds will select Gordon Beckham from the University of Georgia.

If true, it's difficult to complain much about the pick. Beckham has been spectacular for UGA this year, but it's doubtful whether he'll be able to stick at shortstop. If the ever secretive Wayne Krivsky was still at the helm, then it would be easy to discount this rumor. However, this rumor does ring true with me, so I wouldn't be surprised if it turns out to be accurate.

Still, as good as Beckham has been, he still wouldn't be my choice. 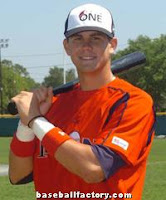 And, as for me, I would still select Casey Kelly. Kelly has tremendous athletic ability and is set to attend the University of Tennessee where he would play quarterback on the football team and play for the baseball team. In addition, Kelly is viewed as a very strong prospect at shortstop and on the mound, so the Reds could draft him as a shortstop (which is where I like him), but if it doesn't work out then they could still switch him to the mound.

Here is a scouting report and video clip on Casey Kelly.

He's got good size, defensive ability, and a very high baseball IQ. He's still maturing and there are questions about his bat, but I'm a believer. He could be the next well rounded shortstop at the MLB level.

Here he is in action.

Overall, I'd like to see the Reds roll the dice with Kelly, but it seems unlikely at this point. Regardless of where he ends up, I'll be following his career.

OTHER PLAYERS WORTHY OF A PICK?

Two other prospects that might be worth a flier in 3rd or 4th rounds are Brandon Crawford and Cutter Dykstra.

Crawford is a junior shortstop for the UCLA Bruins and was considered a potential top 10 pick in this draft before struggling a bit at the plate in 2007. A poor stint in the Cape Cod league with wood bats before the season seemed to rob him of his confidence at the plate, but he continued to demonstrate strong defense at short. While Crawford had a down year, he could potentially be a nice value pick, as the talent is still there.

Cutter Dykstra is the son of all-time MLB great Lenny Dykstra. While he hasn't settled into a defensive position, he is very athletic. He has good power for his size and is a good overall hitter. However, perhaps most importantly, he has a similar playing style to his dad. The Reds have long been a team that is less than the sum of its parts, but Dykstra could be the type of player who could change all of that.

It'll be very interesting to see how it all pans out tomorrow, as the Reds could use another strong draft to help restock the farm system.
Posted by Lark11 at 7:36 PM