The first 6 rounds are in the books and the Reds came away with 5 players after forfeiting their second round pick as compensation for signing Francisco Cordero. 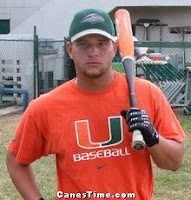 The Reds threw a curveball and selected Miami first baseman Yonder Alonso. They had been rumored to select University of Georgia shortstop Gordon Beckham.

Alonso is an interesting choice for Reds for a couple of reasons. The Reds in recent years have really focused on drafting players at the premier defensive positions, so selecting a defensively challenged first baseman certainly breaks this trend. In addition, selecting a first baseman is an interesting choice given the presence of Joey Votto on the roster. Of course, selecting the best player available is usually a good idea, but one wonders what will happen in a couple of seasons when Alonso is ready for the big leagues. Given Alonso's stunning lack of foot speed, it would appear that Votto will have to shift to leftfield or a trade will be necessary.

One good thing to like about Yonder is his plate discipline. He has a very advanced approach at the plate and should draw a lot of walks. Of course, that's almost a necessity in his case, because he can't run. Still, Alonso should be an impact offensive player and hopefully an adequate defensive player. He wouldn't have been my first choice, but the Reds deserve the benefit of the doubt after a couple of stellar drafts.

The Reds took Zach Stewart in the 3rd round. Stewart was the closer at Texas Tech where he featured a heavy fastball that sat in 95-97 mph range. He also had an average slider that has plus potential. In addition, he has very good control.

Stewart has clean mechanics and good body control. He works from a three quarter arm slot, which gives him good movement on his pitches.

College closers have become very trendy, but this is an interesting choice for the Reds. Given that they forfeited their second round pick, one would think that they would opt for a prospect with a higher upside. The best case scenario for Stewart and the Reds would seem to be pitching ~65 innings a year at the MLB level.

Maybe it'll work out well, but given that Tim Melville, Tim Murphy, Petey Paramore, and Brandon Crawford were still available, Stewart is a curious choice.

Tyler Cline stands 6'2" and weighs 220 lbs. The Reds picked him out of Cass High School in Georgia. The Reds scouts must have worked overtime on this one, as there isn't much information out there on Cline. 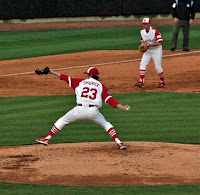 Clayton Shunick was drafted out of North Carolina State. He is a junior, stands 6'01", and weighs 175 lbs.

Shunick has an unorthodox arm action. After he breaks his arms, he drops his pitching arm down and then brings it up in a circular type motion. However, he seems to have an unusual action with his pitching hand on his arm swing. His pitching arm stays in too close to his body in large part because of how he is holding the ball at this point.

You can actually see a bit of this in this photo: His pitching arm is too low and close to his body, because his pitching hand is somewhat cocked, which means that he is actually holding the ball higher than his forearm. If he would relax his hand and let the ball hang below his forearm, then his upper arm would automatically shift away from the body and bring his pitching arm into more of a straight line with his glove arm. This would also give him a more natural and fluid delivery. At this point in the delivery, most pitchers hold the ball and pitching hand below the rest of the arm, which, if he did this, would put Shunick in better position to bring his arm up into his pitching slot.

To be honest, I'm not even sure how Shunick can get into position to throw the ball from this position. If you hold your arm out like he is and cock your wrist back like he does, I'm not sure how you can get your arm up and into position to throw. The muscles just don't seem to work that way. It's pretty unnatural, especially if in comparison you again hold your arm out like he is, but this time let the hand dip below the rest of the arm. The arm muscles shift and everything just feels more natural.

Given the point he is at in his windup and the ball position, I'm not sure he's able to get his arm up into a good arm slot in time to throw the pitch, which can't help but put significant additional stress on the shoulder.

All in all, Shunick seems to lack top notch stuff and throws with unorthodox mechanics. However, it's difficult to argue with the results.

Shunick doesn't look very impressive in action, but his stats indicate otherwise. It'll be interesting to see which is the real Shunick.

Alexander Buchholz is a shortstop out of University of Delaware. He stands 6'0" and weighs 185.

Buchholz is an interesting prospect, as a middle infielder with good pop in his bat.


All in all, an interesting, if not overwhelmingly impressive first batch of prospects. Hopefully the Reds step it up and find a few quality prospects in tomorrow's portion of the draft.
Posted by Lark11 at 9:20 PM