Adam Dunn Traded to the Snakes

After the Griffey trade, Reds fans were waiting for the other shoe to drop. Walt Jocketty didn't make them wait long as he agreed to send Adam Dunn to the Arizona Diamondbacks for three prospects.

While the trade itself is still incomplete, it seems clear that the Reds will get rhp Micah Owings, rhp Dallas Buck, and c/inf Wilkin Castillo. It has been confirmed that Dallas Buck and Wilken Castillo are two of the players, but Micah Owings has yet to be officially named in the deal. He is currently rehabbing a shoulder injury and injured players cannot be placed on waivers until they are healthy. However, even when he is healthy, he probably wouldn't clear waivers, so the trade probably won't be completed until after the season. 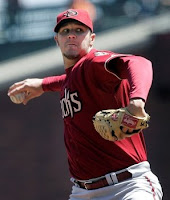 It's only fitting that there is a wide range of opinions about the trade of the most polarizing figure figure in recent Reds memory.

First, addressing the sentiment that the Reds didn't get enough value in return. After years of exorbitant returns for trading away expensive 2 month rentals, the market has violently snapped back in the other direction. All organizations are putting a renewed emphasis on player development and placing significantly more value on prospects. As a result, players like Adam Dunn are currently worth very little in trade.

For comparison, let's take a look at Mark Teixeira, who is either Dunn's equivalent or superior, depending on your take. It's easy to argue that the Braves got a less desirable package of talent for Teixeira than we received for Dunn. The Braves received Casey Kotchman, who is the definition of league average, and minor league relief prospect Stephen Marek. 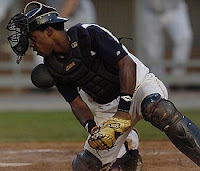 While not comparable to Dunn or Teixeira, Eddie Guardado was just traded away for Mark Hamburger, a "prospect" who the Twins signed out of a try out camp. A solid veteran southpaw like Guardado would seem to warrant more than an afterthought like Mark Hamburger.

Clearly, the market has shifted so far (personally, I think too far) that you just don't get impact talent for two months of an expensive veteran. That's not the way it works anymore, as you can't rebuild your farm system by parting with two months of production from one of your players.

That said, I'm really pleased with the additions of Micah Owings and Dallas Buck. Both could be very solid for the Reds, but I think Buck could be the steal of the deal, as I like his upside better than Owings. Buck was projected to be a first rounder out of Oregon State until injury struck. He attempted to rehab his injury, but ultimately underwent Tommy John surgery midway through the 2007 season. In 2008, Buck has thrown 58.2 innings so far and should only get better as he gets farther away from his surgery.

Overall, it strikes me as a nice package of talent for Dunn. While Castillo projects as a backup catcher or a very flexible utility player, Owings and Buck have ceilings of #2 starters. While they are more likely to end up as #3 or #4 starters, even that would make them nice additions to the organization.

If a healthy Owings allows us to part with Bronson Arroyo, then we are looking at a ~$25M savings by dealing Dunn. Or, perhaps the addition of Owings/Buck allows us to deal a young pitcher (Bailey, Thompson, etc) to address a hole in the lineup (i.e. Jarrod Saltalamacchia, etc).

From where I sit, the Reds added more value to the organization than they would've have gotten by keeping him. Regardless of whether it is because they have underachieved or just because they lack the talent to compete, this team has stunk for the past decade. While you can argue that Dunn wasn't part of the problem, he certainly hasn't been part of any kind of recognizable solution. And, it's difficult to envision him being part of the solution at the increased cost of $15-17M a season. A player's value to the team goes down as the salary cost increases.

Fact remains, it was time for a change and Dunn's departure will ultimately be offset by other moves. Teams survive the departure of big name players all the time. In fact, they frequently get better. We can get leaner, meaner, and more successful. One player doesn't make or break a franchise. Dunn gave us a lot of good years, but it's time for a new direction.
Posted by Lark11 at 8:52 PM