An End to the Ken Griffey Jr. Era

What began with so much promise has ended with little fanfare. It's hard to believe that the Griffey era is over and the Reds have little to show for it but equal parts relief and disbelief. Even after the fact, it's still hard to imagine how it all went so wrong when it seemed so right.

When the Reds acquired Griffey, it was a story that across the baseball universe. On February 10, 2000, the Reds sent Brett Tomko, Mike Cameron, Antonio Perez, and Jake Meyer to the Seattle Mariners for Ken Griffey Jr. The Kid was coming home and the Reds were widely hailed as having stolen Griffey. To make the situation even better, Griffey and the Reds quickly agreed to a multi-year contract that included a hometown discount. Despite all of these positive happenings, things quickly turned sour after a strong first year.

FALLOUT OF THE TRADE

During Griffey's tenure with the Reds (2000-July 30 of 2008), the team went 650-755 for a winning percentage of .463. During that same time period, the Mariners went 731-672 for a winning percentage of .521. Granted, there were significant other factors at work, but the respective team performances clearly indicate that things didn't turn out the way the Reds thought they would. Of course, the Mariner acquisition of Ichiro Suzuki was the biggest reason for the Mariner success, but would that have happened if they had not been forced to trade way Griffey Jr.?

In addition, a case could be made that Mike Cameron was as valuable, if not more valuable, than Ken Griffey Jr. during the time Griffey was with the Reds. Here is the breakdown of their respective performances from the moment Griffey joined the Reds to the day he left the Reds.

When you factor in the defensive prowess of Cameron and the financial flexibility that he brought to the Mariners, a strong case could be made that the Reds would have been better off without Griffey Jr.


END OF AN ERA

Walt Jocketty brought an end to the Griffey era when he traded him to the White Sox for infielder Danny Richar and swingman Nick Masset. While at first glance, it doesn't appear that the Reds got anything more than roster depth and organizational players, Walt Jocketty expressed long held admiration for both and was surprised they were available. Whether that is legitimate satisfaction at the deal or just puffery will be left up to the fans.

Richar may have some upside, as he was in the running to land the White Sox secondbase job back in spring training, but injuries and visa problems derailed his chances. He arrived late to camp due to difficulties in getting a visa and then suffered a back strain and a stress fracture of his ribcage. Richar is a solid defensive second baseman and a good athlete, but lacks plate discipline and doesn't profile well at any other defensive position. At this point, his ceiling would seem to be that of a utility infielder.

Masset is a big guy who throws hard, but has pedestrian career numbers, including a 5.33 ERA, 1.73 WHIP, 4.4 BB/9, and 5.4 K/9. However, the one positive on Masset would be his groundball rate, which is a pretty impressive 1.72 GB/FB, which can only help his chances of success in Great American Ballpark. 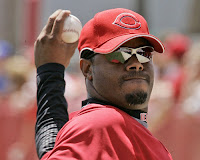 Overall, it's hard not to dream about where the Reds would have been if Junior didn't have so many injuries. Sadly, those injuries derailed what could have been a magical time. What could have been a great era of Reds baseball actually turned into one of the worst. Fans let their frustration over his inability to stay healthy boil over and Griffey was treated harshly during his Cincy tenure.

Unfortunately, in professional sports performance and winning trump all other considerations. A player like Barry Bonds, by all accounts an unpleasant person and a cheater, is beloved in San Francisco, while the one superstar above suspicion in the steroid era and, by all accounts, a good person was vilified by some segments of the Cincinnati fan base.

Unfortunately, all Reds fans have to show for the Griffey era is a lot of "what-ifs" and two questionable "prospects" in Danny Richar and Nick Masset. I still can't believe how it all went so wrong, so fast. Oh, what might have been.....
Posted by Lark11 at 8:03 PM