It's time to highlight the play of Chris Dickerson, who has been just about the only thing worth watching on the Reds as of late. Sadly, that isn't even an overstatement. While he is a patient hitter who works late into counts is a valued skill, his inability to consistently put the ball in play always limited his production. However, an interesting thing happened in 2008 at triple-A Louisville: After a poor April and May, Dickerson got hot. It has yet to be determined whether that is the result of the light coming on for Chris or simply a small sample size aberration. Regardless, it was enough to get Chris promoted to the majors where he has continued to lay waste to the competition.

In 2008 at Louisville, here is how Dickerson performed broken down by month:

His April and May were lackluster and not even much worse than his career line, however his June, July, and August production is clearly a step up. The question remains: is it real?

One interesting note that makes me think the improvement might be legitimate are the reports that Dickerson has been working to shorten up his swing. One of the knocks on Chris has been that his swing has been too long, but there hasn't been any evidence of that at the MLB level. His swing has looked great. It's smooth, fluid, quick to the ball, and certainly not too long. Unfortunately, I didn't get to see too much of Dickerson in the minors, so I can't be sure how much shortening up of his swing he has actually done. Regardless, his current swing does look good.

If he did make adjustments that have helped him out, one area where that might show up is in his line-drive percentage. Here it is by month from Louisville: 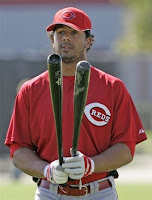 Not surprisingly, he saw a significant bump in the percentage of balls in plays that were line-drives over the last three months. For comparison, here is his line-drive percentage over the course of his minor league career:

So, he is clearly hitting a lot more line-drives over the past few months, but time will tell if that is the result of swing changes. If it is, then it could well be sustainable. That would be great for Chris, as the more line-drives, the more hits you'll get.

Perhaps the real questions should be: can you carry a hot streak up the organizational ladder? Dickerson was "locked in" at triple-A and continues to rip at the MLB level. However, I have a hard time believing that you can simply carry a hot streak with you against a more advanced level of competition. Maybe you can get so locked in that the level of competition hardly matters, but some combination of legitimate improvement and a small sample size seem the more likely explanation. From watching him play and looking at his statistics, I am beginning to think that Dickerson has turned the corner.

That said, he is currently hitting .328/.411/.688 and no one should expect him to produce at that level over any extended period of

time. However, something more reasonable along the lines of .275/.365/.475 when added to his good speed and excellent defense would likely be enough to thrill any Reds fan. Dickerson has always had the athletic ability and approach at the plate to be an effective player, so the idea of him flipping the switch and becoming a solid MLB player isn't out of the realm of possibilities.

Unfortunately, the season is running short, so the Reds won't get an extended look at Dickerson. They'll have to determine the legitimacy of Dickerson's production over the final month of the season. Unfortunately, the Reds threw away a lot of playing time that should have gone to Dickerson on Corey Patterson. However, maybe the Patterson signing gave Dickerson some much needed development time at triple-A. (Ok, that's probably not the case, but we have to find SOME silver lining to the cloud that is Corey Patterson).

At the very least, Dickerson has given us a ray of hope in the dog days of summer. Suddenly, an outfield including some combination of Danny Dorn, Chris Dickerson, Drew Stubbs, and Jay Bruce doesn't seem quite so bad for 2009.
Posted by Lark11 at 10:40 PM