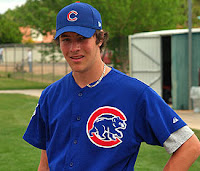 No word on the severity of the injury, so we can hope for the best. Still, it's never a trivial matter when a young pitcher has an arm injury. Lotzkar has been fantastic in his professional career, but I've always had some concerns about his mechanics. Still, he seems to have a great work ethic and drive to get better, so hopefully this turns out to be nothing of consequence. His performance, age, and upside make him one of the best pitching prospects in the minors, so it would be a shame to see his progress derailed by injury.

Here's the recap from the Dayton Daily News:

DAVENPORT, Iowa — Three Dayton Dragons pitchers combined on a seven-hit shutout and Justin Reed drove in the game's only run as the Dragons defeated the Quad Cities River Bandits 1-0 on Sunday, Aug. 3.

With the win, the Dragons increased their lead on the Fort Wayne Wizards to five games with 27 to play in the Eastern Division wild-card race in the Midwest League.

He replaced starting pitcher Kyle Lotzkar who left the game with an undisclosed arm injury in the third inning.

Since joining the Dragons from the Gulf Coast League Reds, Rafael has pitched in three games and earned the win in all of them, tossing 15 innings while allowing just two runs.

The Dragons scored the only run of the game in the fifth when Reed drove in Keltavious Jones with a single.

The Dragons are off today and open a four-game series with Fort Wayne at Fifth Third Field at 7 p.m. Tuesday."