It's just about time for the Nationals to kick off the draft by selecting Stephen Strasburg, so I thought I'd write about the prospect the Reds SHOULD pick in the 1st round.

Shelby Miller is a 6-4 and weighs 207 pounds, which gives him room to improve as he continues to mature and develop. To me, he is the best prospect in the draft behind Strasburg and Dustin Ackley. Miller's upside gives him the nod over the other pitchers in the draft, including lhp Tyler Matzek who is close on Miller's heels.

Miller features a big time fastball that sits in the 92-93 range, but he can crank it up and has touched 98 mph on the gun. His fastball isn't just high velocity, but it is also a heavy ball with good movement. He uses his height to work on a downward plane and uses such a free and easy motion that the ball is on the hitter before he knows it. 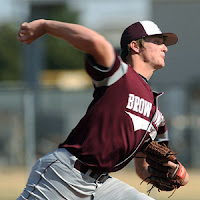 To go along with his plus fastball, Miller uses a hammer curveball that sits in the 75-78 mph range. It isn't always consistent, but it has definite plus potential when he throws it well. Occasionally, the pitch will roll on him and not get the sharp bite that he wants, but it is a very tough pitch when he throws it well. As is often the case with high school pitchers, Miller's top two pitches are so dominating that he rarely has use for a third pitch. Miller has a show-me changeup that he throws from time to time, but it's only average at best right now. He'll need to refine it when he joins the professional ranks, but there is no reason why he can't develop an effective third pitch to round out his repertoire.

Perhaps the most impressive thing about Miller is just how easily he generates plus velocity. His pitching motion is smooth and fluid. His mechanics are very sound and his body control is good, which helps him maintain tempo and balance throughout the delivery. He has good overall athleticism as evidenced by his standout work as a wide receiver on the football team. Despite the radar gun readings, Miller doesn't seem to be a "max-effort" pitcher, which should help reduce his injury risk. His motion is so fluid and easy that it should reduce his injury risk, which is always important when looking at pitching prospects. 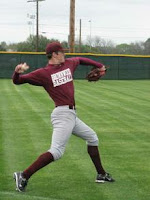 Another plus on Miller is that he has a strong work ethic and desire to improve. He spent the offseason in the weightroom improving his overall strength. He also is always trying to get better and isn't afraid of the hardwork that it takes to get there.

Of course, Miller isn't without issues, as he does lack a third pitch and his control hasn't been great. That said, when you have two potentially dominant pitches to go along with very strong mechanics, I think that's a great place to start.

Given the injury to Kyle Lotzar and the ineffectiveness of Josh Ravin and Homer Bailey, the Reds are in need of an infusion of quality pitching prospects, which is somewhat fortunate given that that is the strength of this draft. After taking a look at the top arms in the draft, Miller strikes me as being the ideal option. His combination of two potential plus pitches, scary good upside, and smooth mechanics that should reduce his injury risk vault him near the top of my draft board. Strasburg and Ackley will be gone, so I'd pull the trigger on Shelby Miller without thinking twice. He is currently projected to last until the Texas Rangers pick at #14, so he should be available to the Reds. He's impressive now, but he has the projection to be even better, which is a scary thought...unless he is in the Reds organization.
Posted by Lark11 at 2:10 PM