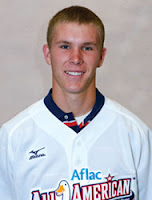 Daniel Tuttle is an intriguing high school arm that the Reds nabbed in the 2009 draft. The early returns on the Reds 2009 draft class are positive and the organization seems to have made significant strides in the draft, improving their track record with first round picks and their ability to find value later in the draft. Daniel Tuttle falls into the latter category, as his live arm and power stuff gives him true impact potential to go along with significant upside.

The Reds drafted Daniel Tuttle with the 149th overall pick in the 5th round of the 2009 draft out of Randleman High School in North Carolina. He was committed to North Carolina State, but the Reds were able to sign him away. Tuttle is a tall, lanky righthander with a live arm, whose size gives him additional physical projection. He was one of the better high school arms in the draft and has significant upside.

Tuttle features a two-seam fastball that sits in the 90-92 mph range and tops out at 94. His fastball not only has good velocity, but it also has substantial sink and late arm-side run, which would make it ideal for Great American Ballpark. As for offspeed pitches, Tuttle has used both a slider and curveball, but as of late has relied more heavily on the former. His slider sits around 82 mph and has sharp bite. His curveball is a big breaking ball that sits around 74 mph, but lacks the tight, sharp break of his slider. He is also working on a change-up, but it needs quite a bit of work to be an effective pitch.

Tuttle needs to keep refining his offerings, but he already has the makings of two plus pitches in his slider and fastball.

The Reds sent Tuttle to the rookie level Gulf Coast League for his first taste of professional baseball. He had little trouble adjusting to the professional game.

Obviously, it's something of a small sample size and the Gulf Coast League can allow a pitcher to succeed while relying heavily on a good fastball, but Tuttle certainly acquitted himself well in his first taste of pro ball and looks to build on it in 2010.

Tuttle's mechanics have both positive and negative aspects, which you can see in his MLB scouting video. The defining feature of his delivery is undoubtedly his arm slot, as he works from a low three-quarter arm slot. His arm slot explains the good movement and the arm-side run on his fastball. It also helps explains his free and easy arm action, as the lower arm slot is the more natural and comfortable throwing motion. Unfortunately, his lower arm slot prevents him from taking full advantage of his height and throwing on a downward plane.

Tuttle starts his windup with a step towards first base with his left leg, then rotating his right foot down onto the rubber. He then brings his hands up to his chest and utilizes a very high leg kick, bringing his knee all the way up to his chest. He has a lean body type and longer legs, so when he brings his knee all the way up to his chest with good hip rotation, he creates and stores up significant energy to impart on the ball. He gets a good push off the rubber as he drives towards the plate and unleashes the energy stored in his lower body.

Tuttle has a fairly standard length stride, though it occasionally seems a bit on the short side. He stays very tall throughout the delivery and at times during the follow through he seems to almost stand up even taller. Tuttle has a loose and whippy arm action, seeming to sling the ball a bit. Perhaps not surprisingly, Tuttle struggles with consistency. He's a taller pitcher with longer limbs, which can frequently make it more difficult to keep the moving parts in-sync. Also, it can be difficult for taller pitchers to maintain a consistent arm slot. He's not a giant, but he does struggle with consistency and command. His follow through finishes with his right leg crossing over his plant foot, which leads to a tendency to fall off to the first base side a bit.

His low three-quarter delivery should take some stress off the arm, but could also leave him susceptible to lefthanded hitters. It's easier for lefthanded hitters to track the ball off of a righthander with a lower arm slot, so Tuttle will need to work to ensure he doesn't suffer from an overly extreme platoon split. It wasn't a problem in the Gulf Coast League, but it's something to keep an eye on against more advanced hitters. Overall, his mechanics seem pretty clean and smooth, which when added to his lower arm slot and easy arm action should limit his injury risk.

Tuttle is an interesting prospect whose live arm gives him more upside than might be expected from a 5th round pick. His two potential plus pitches gives him a fairly high ceiling and his clean mechanics should work to reduce his injury risk. Still, he'll need to work to improve his command and find more consistency in both his arm slot and release point.

He's certainly got some work to do, but for now, Tuttle's live arm and high ceiling earns him the #21 spot on the list.
Posted by Lark11 at 9:32 PM