The Reds signed Miguel Rojas as an international free agent out of Los Teques,

Venezuela. It's good to see the Reds recognize the importance of signing international free agents. In the modern game, it's almost impossible for any organization to succeed without a productive minor league system. And, it's impossible to have a truly productive farm system without a strong international scouting effort. Being aggressive in the international market helps defer the risk inherent in the amateur draft and also increases the total number of quality prospects in the system.

Rojas hopes to follow in the footsteps of a long line of Venezuelan shortstops, including such luminaries as Dave Concepcion, Omar Vizquel, and Chico Carrasquel.

Obviously, the BABIP stablized, but that was only part of the reason for his boost in batting average. He also put more balls in play, as his K% dropped from 14.7% in 2008 down to 8.3% in 2009. The increase in contact rate indicates that Rojas is less overwhelmed and overmatched than in seasons past. Still, it is questionable whether the batting average spike is sustainable. Rojas' difficulty in getting any loft on the ball is problematic, as he still isn't driving the ball with authority and the type of balls in play are a driving factor in hit rate.

The increased contact rate is a positive sign, but he still isn't doing much when he DOES make contact. Hopefully, that's the next step in his development.

Rojas is never going to be an impact offensive talent. In fact, he will likely always struggle to even be an average hitter. For one thing, Rojas' physical size will always work against him and hinder his power output. Fortunately, he has the defensive skills and positional value to offset all but the most egregious offensive deficiencies. If he can be even a half beat above replacement level on offense, then he could be a fairly valuable player.

Unlike most hitters, Rojas eschews the traditional high pre-pitch hand position for a low one. So, to bring his hands into hitting position, Rojas brings his hands up and back rather than down and back.

Rojas also utilizes a wider than shoulder width stance. His stride is a two step process. He draws his stride foot back towards his back foot in an almost toe tap motion before striding even farther forward than his original front foot position. So, he starts wide and gets even wider with his stride.

Generally speaking, the stride serves two main purposes, facilitating the weight transfer and cocking the hips to generate power. However, at this point, Rojas is primarily an upper body hitter. His wide stance and long stride results in Rojas being very spread out during his swing, which limits his hip rotation and lower body action. Some hitters can utilize such an approach and still incorporate their lower body to generate significant power, Albert Pujols and Joe DiMaggio among them. However, the approach seems to rob Rojas of any power that might be generated by his lower body. Given his smaller physical stature, the impact of the wasted power potential is magnified.

In fact, Rojas' lower body action seems almost entirely disconnected from his upper body and, as a result, adds very little to his swing. Rojas might be better served by narrowing his stance and shortening his stride, as that would possibly enable him to cock his hips and improve the load in his swing. That may enable him to drive the ball with greater authority and every little bit would be of benefit to a smaller guy like Rojas.

The wide spread stance limits his lower body action to such a degree that he is left with largely an arm swing. He keeps both hands on the bat throughout the swing, but he still manages to have a bit of excess length to it. The length could create holes in his swing for pitchers to exploit. Overall, there doesn't seem to be a significant amount of projection left to his offensive game, but with additional development and a few adjustments he could become a serviceable hitter.

Here is a look at Rojas at the plate courtesy of RedsMinorLeagues on youtube: 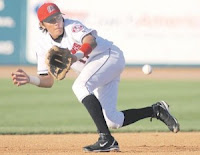 Obviously, this is what gives Rojas the vast majority of his value. He plays a premier defensive position and plays it very well. Even if his bat does come around to respectability, Rojas will always fit the "defense first" player profile. Regardless, when you play defense as well as he does, that's not necessarily a bad thing.

Rojas has been listed by Baseball America as the best defensive infielder in the Reds farm system. Scouts rave about his range and his soft hands and their opinion is also borne out by the defensive metrics.

The Total Zone rating on Rojas is pretty impressive. In 2008, Rojas played for the Billings Mustangs in the rookie Pioneer League at the age of 19. At Billings, Rojas rates as a +17, which is an outstanding fielder according to the system. In 2009, Rojas moved up to Dayton where he posted another stellar number. His +11 mark rates him as a very good fielder under the Total Zone system.

Overall, Rojas has the rare type of ability to be an impact defensive player.

Rojas is an intriguing player. He still has a long, long way to go on the offensive side, but his plus defensive skills give him a bit of upside. He has significant offensive deficiencies, but his stellar glove work will offset much of his likely lack of offensive production. Still, he needs to show SOME offensive ability at the plate to be a legitimate prospect.

If his size and swing mechanics result in advanced pitchers knocking the bat out of his hands, then it won't matter how well he can pick it in the field. As he continues to advance up the ladder, Rojas will need to refine his offensive game and focus on maximizing his contact rate and putting the ball in play. He does seem to have some ability to get on-base, but if he can't drive the ball with authority then he may struggle to utilize it. Prospects with limited power struggle to utilize their on-base skills, as advanced pitchers have no reason not to challenge the hitter by pounding the zone.

Overall, Rojas' defensive ability is what lands him at #22 on the list, but to move up the list he'll have to focus on putting the ball in play on a consistent basis to keep his batting average at a reasonable level. Rojas needs to make some serious improvements on the offensive side if he is going to continue to be considered a legitimate prospect as he climbs the ladder.
Posted by Lark11 at 9:36 PM