The Reds addressed an area of need when they brought Donnie Joseph into the organization. Quality lefthanded pitching is in short supply, as Matt Maloney and Travis Wood are the only other quality southpaws in the system. Joseph stands 6-3, which gives him some room for additional physical projection and potentially an increase in velocity.

Previously, the Reds had good success with a college closer out of the state of Texas and certainly hope to have struck gold again. Joseph hasn't been in the system long, but he immediately becomes one of the more interesting pitching prospects in the system.

Joseph is a good athlete, as evidenced by his time at Hays High School. He was a 4-year letterman in baseball and a 3-year letterman in both basketball and football, earning All-District honorable mention as a wide receiver and finishing as the schools second all-time leading receiver. He was also a member of the National Honor Society and the Chamber Choir. After high school, he decided to attend the University of Houston. 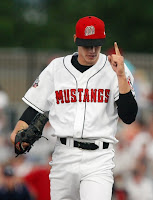 During his junior season, Joseph really broke through to a new performance level. He worked 50.0 innings, posting a 2.16 ERA, 1.10 WHIP, 4.0 BB/9, and 13.5 K/9. Part of his success was that he worked almost exclusively out of the bullpen, working in 31 games, including just 1 start. As the team's closer, he was also excelling in high leverage innings.

After two lackluster seasons, Joseph's performance as a junior earned him All-Conference USA closer and vaulted him all the way up to 18th on Baseball America's list of 2009 draft eligible southpaws. The Reds selected Joseph in the third round of the 2009 draft with the 88th overall pick. Joseph was a draft eligible junior coming out of the University of Houston where he most recently served as the team's closer.

The Reds signed Joseph for $398,000 and sent him to the Billings Mustangs of the rookie level Pioneer League. He quickly proved that the Pioneer League hitters were no match for him. For Billings, Joseph posted a 0.77 ERA, 0.86 WHIP, 3.1 BB/9, and 8.5 K/9 in 11.2 innings. He was a bit lucky, as evidenced by his BABIP of .215 and FIP of 2.34. Even so, a stellar performance and one that rightfully earned him a promotion to low-A Dayton.

For Dayton, Joseph worked in 16 games and 20.2 innings. In that time, he posted a 4.35 ERA, his WHIP was 1.11, his BB/9 was 4.4, and his K/9 was 13.5. The walk rate is higher than it was in Billings, but his K/BB is also more impressive with a 3.10 mark. The ERA obviously leaves something to be desired, but it's not reflective of how well he pitched. Looking at his component ratios, it's not surprising that his FIP is significantly lower at 1.80, which is more reflective of how well he actually threw the ball.

Again, the numbers need context, as a college prospects SHOULD perform well in the rookie league and low-A ball. Even so, he did what he was supposed to do, which is certainly deserving of credit. All too often it seems that we fall into the trap of completely discrediting a polished prospect's performance in the lower levels because of the age of the competition. While that's certainly an important consideration, meeting expectations isn't always the easiest thing to do and Joseph did that and more in 2009.

At this point, Joseph is primarily a two pitch pitcher. He features a low 90s fastball with good movement and a slider that's inconsistent, but filthy. If he can refine his command, then he could potentially have two plus pitches in his repertoire. His slider has the hard bite to it that will make it a true out pitch if he can improve his command of it. If so, he could be in line to work high leverage innings, as he'll have a true swing-and-miss pitch to get the big strikeout when he needs it.

Joseph works from a high three-quarter arm slot. To begin his delivery, Joseph starts with a step towards third base with his right foot. He then shifts his left foot down on to the rubber and brings his right leg up into a leg kick. His leg kick comes up slightly higher than parallel with the ground and he uses some hip rotation to build up rotational energy to impart on the ball (photo on left). When his plant foot lands, Joseph drives forward, but also has a lean towards third base that is revealed in all aspects of his body position during the delivery. When he releases the ball, his weight is on the outside of his plant foot, the knee of his plant leg is outside of the plant foot, and the position of the upper body is also somewhat towards third base (photo on right). His mechanics and delivery are somewhat unorthodox and may lead to continued problems with consistency, as he simply does not drive his momentum directly towards homeplate.

Here is a look at Joseph in action, courtesy of RedsMinorLeagues on Youtube.

The lean in his delivery gives his arm action the appearance of pulling his pitching arm down and across his body. His delivery also seems to involve pulling his head towards third, though to a far lesser extent than the poster child for extreme head action, Hideki Okajima. Given Joseph's arm action, it's easy to see how he gets good movement on his fastball, as it should impart some arm-side run on the ball. The lean also causes his left leg to whip across his body on his follow-through, as it has no choice but to follow the rest of his body. Unfortunately, it leaves him in less than ideal fielding position.

In addition, watching the video clip, one of the first things that really jumps out at me is the good deception in Joseph's delivery. The video is from right behind homeplate, so you can really get a good look at the deception in the pitching motion. After breaking his hands, he uses an arm swing that conceals the ball behind his hip. This deception really prevents the hitter from picking up the ball until Joseph brings the ball up into throwing position and helps his velocity play up a tick. The later the hitter picks the ball up, the quicker it seems to get on the hitter and the less time he has to react to it.

Also, the Billings Gazette has a nice video of Joseph in action and an interview about his adjustment to the professional game. You can see that here.

Joseph needs to continue refining his command and control in order to unlock his true potential. Given his pitching style and repertoire, he may be better suited to the bullpen, but the Reds may give him the Zach Stewart treatment. He would need to find a quality third pitch in order to find success in the rotation, but the Reds may give him the chance. One of the more effective development philosophies for pitching prospects is to slot your best arms into the rotation, as that gives them consistent innings and, perhaps most importantly, allows them to get regular practice in side sessions between outings. So, that may well be the development path the Reds lay out for Joseph.

Joseph has good size, good movement on the fastball, and the potential for a plus breaking ball. He certainly has some things to work on, but those qualities alone are enough to earn him the 19th slot on the list.
Posted by Lark11 at 10:50 PM